You have to find the right investor: Unicorn founders at TechSparks 2022 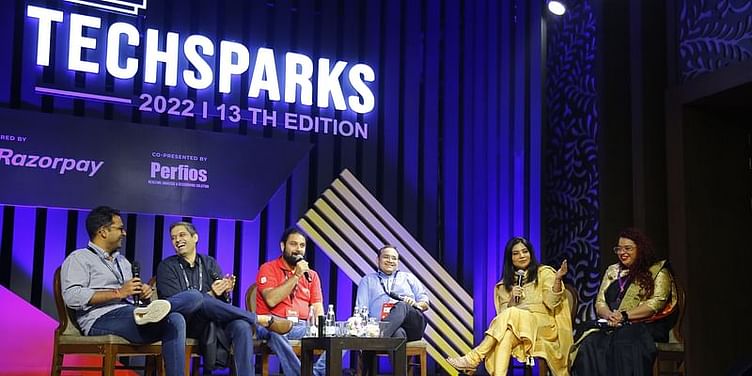 India is home to over 100 unicorns, and the number is only rising. But behind the success, lay pivots, playbooks and unicorn-makers. TechSparks 2022 saw a glimpse of the journey of unicorns and the people backing them.

Being a unicorn is a milestone

BII is an investor in all three unicorns on the panel, and the team has worked with them rather closely. With a decade of experience, and as leaders of growth-stage (Series B-C) investments, BII has witnessed that founders and companies are exhibiting maturity at an early stage. The industry landscape is changing, and the team is ready to dive in. Speaking about India’s unicorns, Pankaj said, “Building a large outcome should be celebrated. Building a unicorn is a milestone, that some significant value has been created. It does not mean further milestones won’t come.”

Adding to this, Pranjal said that unicorn is a tag that conveys the company has the potential to be a category leader, and inspire others in the ecosystem.

But Abhay noted that the unicorn tag could be a double-edged sword. He said that the mythical unicorn died because it forgot its ferocity and fell for a bait. “That’s the worry I have,” he said.

Echoing similar sentiments, Saahil shared that when they turned unicorn, it did not really change anything. “But it's heartening to see the ecosystem and the momentum shift,” he added.

Logistics unicorn Shiprocket made pivots and micro-pivots more than twice and achieved the S-curve multiple times over the years. But the team realised it was too early. Saahil added, “Make something small, dont think big. At the early stage, think small. Make an unscalable business, but make it good. If you die, 100 people should be unhappy. That learning was critical for us.”

For Abhay, the aim was to make a special company. He remembered that most people look at the money the business will make, whereas the company culture needs to be treasured. “I think the deep obsessive focus on wanting to make a special company where people almost everyday wake up and say that I'll do anything for this company sets off a mad movement,” he noted.

Executive education platform Eruditus made headlines by bringing Ivy League education to executives around the world. Pranjal said that for the team, two things are pivotal. One is a mission. “You have to remain true to the mission. It helps you clarify what you have to do,” he said. And the second is the playbook. “Once you get the playbook right, scale fast. We were offline till 2016, we went online in 2017, we tweaked the model and got it right in 2018. We said India, USA, Latin America, China, Middle East - let's start replicating that playbook,” he added.

While founders have their own lessons and targets, Pankaj gave a sneak peek into the VC mindset. Speaking on how Bertelsmann decides to invest in a startup, Pankaj said, “Multiple factors go into a decision. Series B is in our DNA. Product should be really good, with a tangible difference in the product, and a well thought out business idea”. He further added that finding the right founding teams is critical too, it’s akin to a marriage. “We are long-term investors with a firm conviction in the founders’ vision. Backed by a 185-year-long legacy, we bring stable capital and are sector-agnostic. We work, we play snooker, hiking, badminton with our portfolio founding teams,” he revealed.

Abhay also stressed on the importance of bringing the right leaders on board. “It’s important to find the right investors who will continue to back you and believe in you. We can call Pankaj even in crisis situations and appreciate his inputs,” he added.

Pankaj added that VCs too are learning everyday, and they have learnt about the trends in the last 10 years. With increased allocation of $500 million, Bertelsmann expects to make 6-8 new investments every year until 2025. Connecting with founders early, Bertelsmann’s mid-stage funding will transition into the early-growth stage. “While there is a funding winter, India is in a good spot. Raising Seed, Series A and Series B rounds won't be difficult. We are open for business, so entrepreneurs can reach out to us,” he signed off.