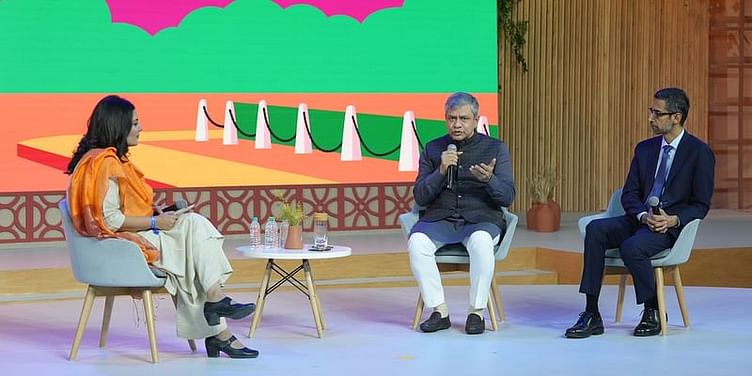 In conversation with YourStory Founder and CEO Shradha Sharma, Alphabet CEO Sundar Pichai and Union IT Minister Ashwini Vaishnaw discuss how technology can be made accessible to benefit a wider section of the society, including the most marginalised.

India is harnessing technology, particularly artificial intelligence, to not just transform payments but also improve agriculture, take credit to the poorest, and even bridge language gaps in a country of a thousand dialects—an effort Google is also deeply invested in.

At the ‘Google for India 2022’ event, Ashwini Vaishnaw, Union Minister of Electronics and Information Technology and Communications, and Alphabet CEO Sundar Pichai charted India’s evolving tech story and how the country can take advantage of its massive talent pool.

“AI will play a very big role in India’s tech story,” the Minister said in a conversation with Shradha Sharma, Founder and CEO of YourStory.

The use of AI for national projects will ride on the success India has already had with its payments system (UPI) and identity system (Aadhaar), as well as the “rapid adoption of technology across different sections of the society or across all geographies,” Ashwini Vaishnaw said.

“Once we have the Data Protection Bill, the Telecom Bill, and Digital India in place, it creates a robust framework in which we can use some of the public datasets and harness the power of technology to provide better solutions and better services,” the minister said.

Sundar Pichai said Google was increasingly using AI to scale up the number of languages on the platform, and that it had recently added nine Indian languages, including Assamese, Bhojpuri and Konkani.

“Now we are working on one powerful AI model which can bring information across thousand languages,” he said.

Bringing India to the rest of the world

Sundar Pichai also illustrated how Google was replicating the success of the Unified Payments Interface (UPI) in other countries. “We built Google Pay in India using the UPI stack and we are now bringing that to other countries in the world,” he said, adding that many such solutions would continue to influence technology developed elsewhere in the world.

Ashwini Vaishnaw said private players have a crucial role to play in leveraging India Stack—the government-backed project to create a unified software platform. He explained that while the government will provide a platform, it will be up to private companies to build on it and use the resources to the best of their ability.

Building technology from the ground up has its own challenges.

To address this, the minister said, the government is working on creating three horizontals—Indian Telecommunication Bill, 2022; Digital Personal Data Protection Bill, 2022; and the Digital India Bill. “These are the three horizontals on top of which will be multiple small, sectoral-focused modular regulations. We should be able to complete this exercise in 14-16 months,” the minister said. He added that the Data Protection and Telecom bills that have been put up for consultation should be passed in Parliament by July or August (during the Monsoon session).

Google’s top boss emphasised the need for proper regulation. “I think it’s important for countries to think about how to best safeguard its citizens,” Sundar Pichai said. And “I think India has a leadership role to play here.”

“Given the scale and the technology leadership (in India), it’s important to make sure you’re balancing and putting in safeguards for people, (and) you are creating an innovative framework so that companies can innovate (with) certainty in a legal framework,” the Alphabet CEO said.

Hopefully, “India will also be a big export economy and benefit from an open and connected internet. I think getting that balance right will be important,” Sundar Pichai added.

The minister and the Google CEO both agreed that India has a large reserve of tech talent.

Union Minister Vaishnaw’s word of advice for budding entrepreneurs was to think big. “Think in terms of global population… because all of the (previously) missing components which are needed for creating a huge scale solution are today available (in India).”

Adding to the minister’s point, Sundar Pichai said, “Tech is much broader than just programming or engineering. For tech to work at scale, including things like AI, thinking about the surrounding areas, be it policy, ethics… thinking about tech holistically will create opportunities for many more people.”

“The more people can get involved (from) across all walks of life, I think tech will be better for society.”