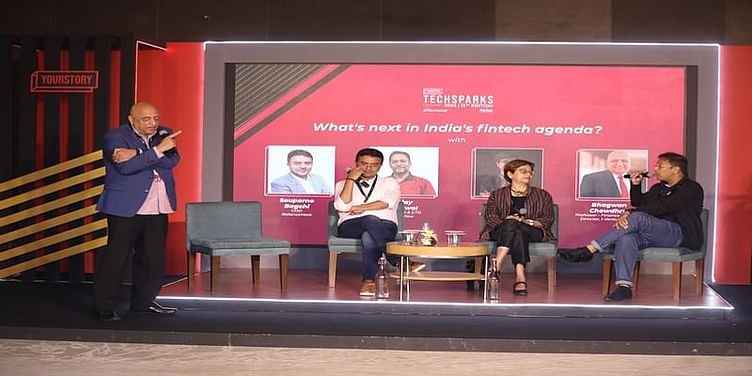 Given how India is already one of the largest and fast-growing fintech markets globally nurtured by several Indian initiatives, one must ask - What's next in India's fintech agenda?

Rapid advancements in technology with state-of-the-art innovation emerging every day have ensured that the global financial services industry, and fintech, in particular, is seeing exponential growth. This is true even in India, where the fintech landscape has never looked better.

EY reports that India is leading the world in the race to adopt fintech at a rate of 87 percent, over 20 percent higher than the global average of 64 percent. At this rate, it comes as no surprise that the Indian fintech market is expected to reach $200 billion by 2030. What are the next steps that fintech companies must take to inch closer to this projection?

“Before we even answer the question [what’s next in the financial journey], where are we in the financial services journey, as far as the country is concerned?” asks Sanjay Aggarwal, Co-founder and CTO, ﻿Money View﻿. Sanjay was talking at the final panel discussion in the Fintech track on Day 3 of TechSparks 2022 moderated by Bhagwan Chowdhry, Professor of Finance & Faculty Director, I-Venture @ ISB.

By Indians, for Indians

India is deeply underserved in terms of financial services, especially credit, he said, adding that despite being in the top five economies in the world, India’s household debt to GDP ratio is not in the top 50.

“Fintech is just making sure that financial services and products become more accessible to a larger number of Indians,” he said, adding that this work involves heavy use of technology and data and it has just begun by laying a foundation for fintech companies to build on to ensure services reach every nook of the country,

Sanjay cited an example of how nearly 80 percent of Money View’s customers hail from Tier II and Tier III cities to explain the rising demand in such smaller cities and towns.

Solutions for reach and depth of services

A lot has been on the infrastructure side of things, as is in the case of the India stack and digital currency, said Souparno Bagchi, COO, Balancehero. Looking at problems of scale and depth, Souparno believes that while fintech companies have done “awesomely well” in scale, there is work to be done in terms of reachability, awareness, and lead indicators.

“What is also going to be very interesting in the next 2-3 years is how we are going to solve the deeper problems,” he said, pointing out how Balancehero is underwriting around alternate data. There is a whole universe to explore to identify solutions that include both scale and depth, which is going to be a major driver in the sector, he added.

Regulators as partners of startups

Sandhya Vasudevan, former MD - Deutsche Bank and Member, Indian Angels Network noted that the bank is kicking off a series to communicate to and help fintechs understand that regulators are their partners.

She highlighted how regulators are taking care of country risks and individuals who don’t understand finance, which is essential, because “you see many companies that have done extremely well and yet, they finally get caught on some regulatory issue”. In Sandhya’s view, it is important to safeguard the ecosystem to prevent one failure from contaminating the whole community.

Souparno agreed that while regulators are partners of fintech companies, it may seem like the two are a binary sometimes. Given the number of sub-sectors in fintech, there is a huge need for self-regulatory organisations (SROs) within the space in India, he said, adding that there are steps that regulators are taking in this regard. “More and more intermediary interfaces like the SROs could be a big leap in terms of working together,” he said.

Can private entities take up monitoring?

Sanjay said that a regulator’s job is fantastic and probably the hardest as it needs to ensure responsible innovation occurs where customers are protected. “That job has to be managed by an independent entity. It cannot be given to the incumbents, the large private sector players because they will just vouch for their interests,” he added.

“We need to be very clear – both from the regulators’ and the players’ standpoint – if it is a matter of compliance, and therefore it is 0 or 1, or is it a matter of risk,” said Souparno.

Regarding the issue of people fearing fintech appliances, Sanjay highlighted government initiatives to push digital payments, such as real-time text messages after every transaction and added that communicating to people in regional languages and using voice instead of text can help reach a larger audience.

He noted that Money View has conducted successful experiments with voice such as replacing customer services executives in their call centres with a voice bot, which saw a huge uplift in response rates.

Sandhya cited the example of how blockchain can be used differently in India compared to other countries and wondered what decentralised and automated organisations can be created from this. The question that arises then is how much regulation is needed if digital currency is playing in, say, the social sector, she added. “Can we be a leader in pushing those dialogues?” she asked.

A development Sandhya hopes to see is quantum computing in the fintech space in India. Talking about cybersecurity, she noted that the fintech space could be vulnerable if it is not properly safeguarded. “Every startup needs to have a basic level of cybersecurity in place, otherwise it can be a serious disruptor,” she said.

Sandhya posed the question - how do we partner fintech with other major verticals such as mobility, agritech or the creator economy? Noting that this is something they are working on, she also highlighted that there is no database for fintech startups – which restricts how much they can be supported.

She highlighted the support from RBI for a project to boost rural women entrepreneurship among 500,000 women in Karnataka where they are trained in digital and financial literacy through an interactive medium. She also pointed towards developments regarding a cybersecurity perimeter and ‘Meghraj’, an Indian cloud.

Sandhya noted that while the government is not doing nearly enough about climate fintech, various groups are working towards impact lending, sourcing and other elements of fintech.

Bhagwan highlighted the various initiatives and projects ISB is working on, one of which is a voice solution for bank balances. “We are convincing the government to give us a number, 222 and BBB - Bank Balance Batao - and it is a one-trick pony, it does only one thing,” he said, adding that if a customer dials BBB, the service will call them back and report their bank balance. This can alleviate consumer fears about whether their transactions have occurred safely.

Bhagwan also believes that “we need to bring the human back”, and added that they are bringing out a book named Hum Tech - Human technology. This would be an attempt to help vulnerable people with their transactions. Having whom he calls digital didis to help can also ease the redressal process.