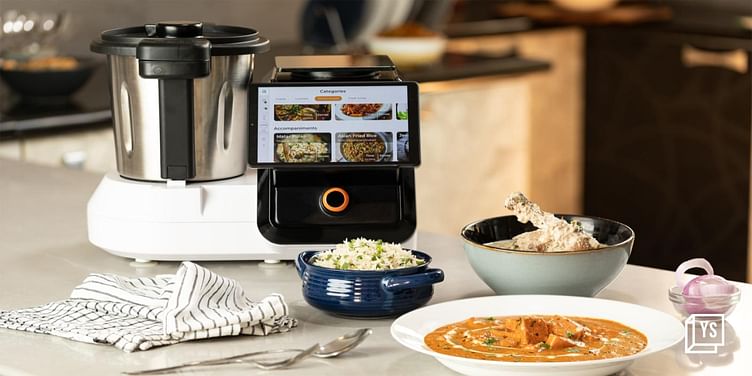 Imagine you are cooking pasta for a party. You start assembling the ingredients hours in advance. You take another hour to prepare the sauce and chop the vegetables while keeping an eye on the boiling pasta. Finally, after several steps, you combine the sauce and pasta, keep the garnish ready and begin plating the dish.

What if you have an appliance to do it all? Right from mincing and sautéing the veggies to preparing fresh, lump-free sauce in a single pot, one that can cook a perfect meal within 40 minutes.

To offer this convenience, Bengaluru-based consumer hardware startup Up has built a smart connected appliance called DelishUp, which people with zero experience in the kitchen can use to prepare hassle-free, nutritious meals.

“Smart TVs and phones are only the tip of the iceberg of connected tech that will revolutionise Indian homes. We are making investments towards hardware, software, and cloud technology to deliver superpowers to Indian homes via our connected appliances,” says Mahek Mody, Co-founder and CEO of Up.

Mahek was previously the Chief of Staff at mobility firm ﻿Ather Energy﻿, while co-founder Mohit Sharma has led the engineering team at beverage startup ﻿Chaayos﻿.

Built by a 28-member team, Up (legally Up⤴️) is a smart cooking assistant that aims to simplify daily cooking. It has raised $1.3 million so far from investors including Nithin Kamath-led ﻿Rainmatter Capital﻿, and co-founders of Ather Energy, ﻿Unacademy﻿, as well as ﻿Stanford Angels﻿, and ﻿Entrepreneurs India﻿. Early ﻿Tesla﻿ investor Tim Draper also participated in the round.

Smart-connected appliances that use Bluetooth and Wi-Fi can be both convenient and time-saving. These devices can be operated through smartphones. DelishUp is a combination of a smart cooking jar that uses pre-sets for cooking tasks, an integrated weighing scale that makes cooking for one to four people easier, and a touch screen that gives access to recipes and helps control the device.

The smart cooking jar controls chopping, stirring, and cooking functions, making it a mess-free and hassle-free experience for consumers. It uses varying blade speeds to customise chopping for different recipes and vegetables.​ Its auto-stir function tosses and mixes food efficiently. Its heating system can control the heat for steaming, boiling, slow cooking, sautéing, and stir-frying food, all in a single jar that doubles as a kadai, a wok, a pan, and a cooker.

The touchscreen gives users access to over 100 in-built recipes, including a variety of curries, gravies, rice dishes, and global cuisines, to be made with ingredients that are easily available. It also displays the macros and calories for all meals.

The appliance has a modular design, which means components can be separated for service or repair. Up will offer at-home service in Bengaluru, while consumers can also get the mechanical parts serviced through expert service professionals from Urban Company.

The appliance is made in India and comes with a one-year warranty. The lifespan of the product is at least ten years, cooking two meals every day, according to Mahek.

The device has gone through beta testing and has been used in more than 250 Bengaluru homes. During personal testing, DelishUp yielded positive results on usability, quantity, and taste, except on two occasions.

In one case, when cooking matar paneer, the paneer did not retain its cube form and was minced and blended with the thick gravy. Mohit told YourStory that the company has now fixed the issue with an over-the-air (OTA) update.

A separate attempt to cook paneer biryani proved unsuccessful as the appliance did not finish cooking the dish. This was caused due to an internal update to the recipe at the time of cooking, Mohit noted. He added the company is looking to continuously improve existing recipes based on user feedback and internal testing.

Barring these two attempts, DelishUp lived up to its claims. Both red and white sauce pasta preparations were considerably simplified by the appliance, reducing the cooking time and effort. The taste was at par with restaurant-style preparations.

It definitely makes home cooking easier for people with some skills or none, but requires human presence and involvement at different stages (more participation in the first half) of the cooking process. It is not an automatic cooking appliance wherein people can load all the ingredients for a dish and expect it to cook on its own. Mahek says that the company tested such an automatic variant, but discovered that people who were cooking wanted to be involved in the process.

Another aspect of using a cooking appliance is its cleaning process. DelishUp offers a rinse mode, wherein after adding water and liquid soap, the jar cleans itself from the inside. However, the extent of cleaning varies from one dish to another as in some cases food stuck at the base of the jar would require manual scrubbing even after an automatic rinse. The jars can be cleaned manually by removing the blade and people can also buy additional jars.

Mahek says Up competes with food delivery firms like Swiggy. “People are ordering from outside a lot and we want to change that. We want people to eat healthier, at home and cooking with this product is definitely cheaper,” he adds.

“Most of our consumers who think about buying a product almost ended up benchmarking us against that,” Mehak explains, seeming confident about the product’s value proposition.

Up also competes with Nosh, an autonomous cooking robot from Euphotic Labs, and Nymble, a company that builds robotic assistants for kitchens. Both firms are based in Bengaluru.

The smart connected cooking appliances market is expected to grow by $10.67 billion between 2021 and 2026 at a CAGR of 22.26% during the forecast period, according to market research firm Technavio.

DelishUp is slated to launch in January 2023 for Rs 24,999, while select early buyers can avail of it for Rs 17,999 through the website. The company expects to sell about up to 1,500 units in the first six months, and hit the 3,000 mark by 18 months. It will be available on e-commerce sites, including Amazon and Flipkart later in the year.

Users can also look forward to lighter and pro versions of DelishUp. While the lighter variant could have a more minimalistic design, the pro variant would have more functionality, different jars and accessories, and maybe a companion microwave or a pan.

Up also intends to build more smart connected appliances like refrigerators and microwaves for modern homes.