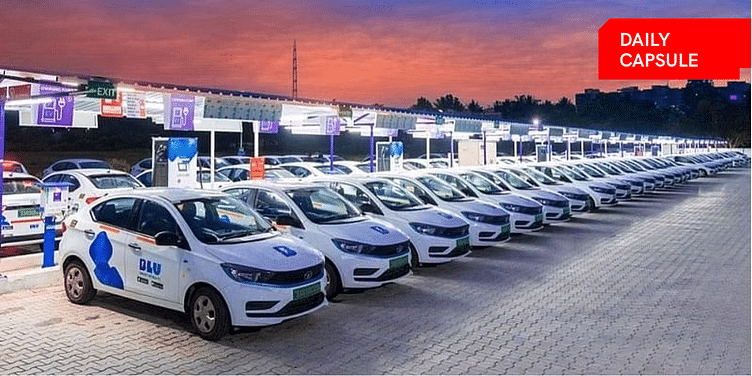 Electric ride-hailing company ﻿BluSmart﻿ is in advanced talks to raise $250 million in its latest Series B round, $50 million of which will come from existing investors and founders.

In a major fillip for the Indian EV industry, ﻿Ola﻿ is launching a fleet of 10,000 electric car taxis in the coming weeks.

The new "premium" fleet, currently in pilot, will be operated by top-rated drivers, and provide 100% ride assurance post allocation of the cab, zero cancellations, and 100% cashless payments.

In other news, Byju Raveendran is seeking funds to finance the buyback of stakes in ﻿BYJU'S﻿ by using his shares as collateral. According to Bloomberg, the founder aims to raise his stake in BYJU’S to as high as 40%.

Meanwhile, the biggest tech trade show of the year is back.

Starting today, the Consumer Electronics Show (CES) 2023 is set to showcase the latest developments in TVs and laptops, smart home gadgets, and plenty of phones, cars, and also smart toilets in Las Vegas.

The CES is scheduled to go on till Jan 8 and will reveal the latest trends, announcements, and ascendant product categories we will see throughout the rest of 2023.

Catch all the action from CES 2023 here.

Here’s your trivia for today: On which continent did modern humans first evolve?

Electric ride-hailing company ﻿﻿BluSmart﻿ is in advanced talks to raise $250 million in its latest Series B round, $50 million of which will come from existing investors and founders. The remaining $200 million will be provided by a large climate fund and a pension fund, Co-founder Anmol Jaggi told YourStory.

Driving into the future:

The dynamic duo of Kalpana and Uma Jha, founders of ﻿Jhaji Store﻿, failed to receive funding in Season 1 of Shark Tank India. Despite the setback, the entrepreneurs, who make pickles and chutneys, continued on their journey to build the brand. In Season 2, Sharks Namita Thapar and Vineeta Singh visited their factory and presented them with an Rs 85 lakh cheque.

Would you pay for a delivery fee or wait for groceries? Most consumers in India would skip paying extra to get their orders early, a survey by community and poll platform for governance, public and consumer interest, ﻿LocalCircles﻿, has found.

The survey also indicates that unless quick commerce startups were willing to offer discounts and differentiation, they might not be able to sustain themselves.

On which continent did modern humans first evolve?