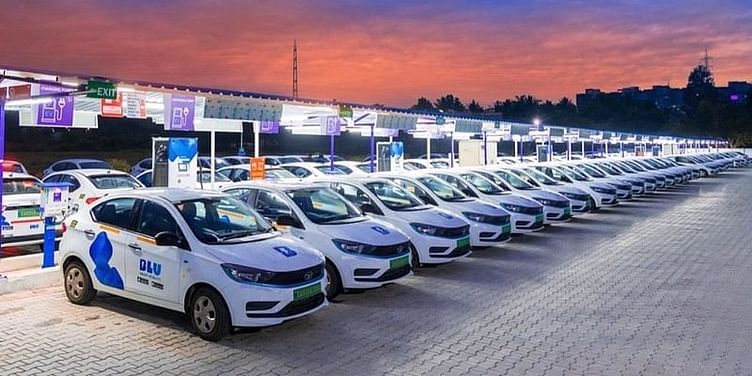 About $50 million of the $250 million in funding is from the company's existing investors and founders, said Anmol Jaggi, Co-founder of BluSmart. The remaining $200 million is from two new investors.

﻿BluSmart﻿is in advanced talks to raise $250 million in its latest Series B round, $50 million of which will come from existing investors and founders, while the remaining $200 million will be provided by a large climate fund and a pension fund, Co-founder Anmol Jaggi told YourStory.

The ride-hailing startup, whose affordable green taxis have received public traction, has also secured a $100 million credit line to expand its fleet via the purchase of 7,000 electric vehicle cars, Anmol added.

The new credit line will be disbursed in less than 15 days. The fundraise, however, has not formally been signed off on yet, he added.

BluSmart's founders will contribute $10 million to $20 million to the $250 million equity investment round, while existing shareholders including British oil company BP's investment arm, BP Ventures, will put up the remaining.

A climate fund and a pension fund will invest a total of $200 million in BluSmart as part of the current funding round, becoming new additions to the startup's list of shareholders.

Hail an EV for your daily commute

Talks are in advanced stages, and the final signs-off are pending, Anmol said.

The startup hopes to deploy the fresh capital to expand its fleet, bolster technology, and increase its charging infrastructure. By the end of March 2024, BluSmart expects to set up 8,000 charging stations, up 5X from the 1,600 charging stations it currently has, and operate over 40,000 EV cabs.

Founded in 2019 by Anmol and Punit Goyal, BluSmart started with 70 electric vehicles in Delhi-NCR.

Unlike typical ride aggregators, the company leases, owns and operates its electric cabs.

Drivers on the platform don't incur any costs such as fuel, EMI, or rent either-they're given a minimum guarantee pay (up to 30% of their total pay), and variable pay (up to 70%) depending on how well they maintain the car, and their behaviour with customers.

It currently has nearly 5,000 driver-partners.

After completing two million trips via 2,200 cabs and finding success in Delhi, the startup launched in Bengaluru in 2022. Currently, it has over 3,000 EVs on the road, across Delhi and Bengaluru and hopes to soon expand into more metropolitan cities.

The company has been garnering positive reviews on social media for its features such as zero cancellations, no surge fees, and on-time rides.

There has been a recent increase in the usage of alternative cab aggregators to Ola and Uber due to negative experiences with safety incidents, frequent cancellations, extra payment demands, and slow customer support resolution times. Bengaluru-based Lithium, Envi, and MYn have also been gaining popularity following strong demand from travellers in cities, although Ola and Uber still retain their prime spots.