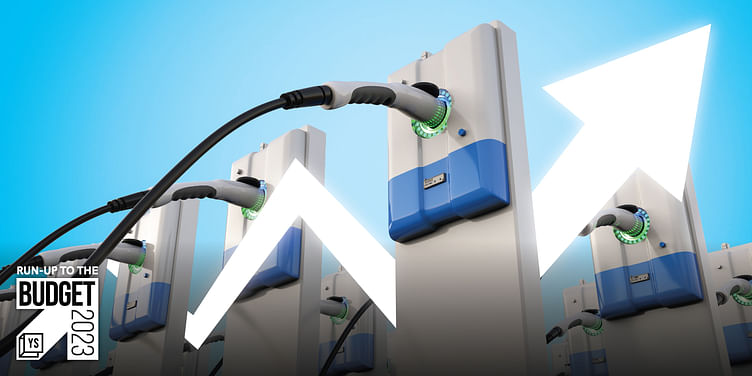 As the electric vehicle ecosystem gets more traction, players in the sector hope that more clarity on FAME subsidies, GST relief as well as production-linked incentive schemes will accelerate EV adoption.

The government also said it expects an increase in the estimated government expenditure for the Faster Adoption and Manufacturing of Hybrid and Electric Vehicles (FAME) scheme to reach Rs 2,908.28 crore for FY22-23 compared to Rs 800 crore estimated in the previous year.

As of 19 December 2022, 7.67 lakh EVs have been supported under Phase-II of the FAME India Scheme by way of a Demand Incentive amounting to about Rs 3,311 crore, according to the data released by Press Information Bureau.

For Budget 2023, the EV industry stakeholders hope for an extension of FAME and lower GST (goods and service tax) rates as well as policies encouraging domestic EV production.

“2022 was a mammoth year for EVs. 2023 will see EVs becoming mainstream. It is noteworthy that GoI’s subsidy schemes like FAME supported this development. Electric three-wheelers, which are the backbone of mass public transportation across India, are leading this transformation. We want GoI to take cognizance and expect an extension of the FAME-II scheme similar to the one given to two-wheelers,” says three-wheeler manufacturer Altigreen founder Amitabh Saran.

The financial year 2022-2023 showed new three-wheeler registration of over 5.31 lakh vehicles, according to the vehicle registration portal Vahan.

Companies hope that the upcoming budget will extend the FAME subsidy to batteries.

“We also hope to see swappable batteries being brought under the umbrella of the FAME subsidy. Getting Li-ion batteries under these subsidies will enhance buyer confidence and do away with EV users' apprehensions regarding the recurring investment involved in batteries," Pulkit Khurana, Co-Founder, Battery Smart, says.

Shailesh Vickram Singh, Co-founder of Climate Angels Fund shares that there is a need for more clarity on whether batteries sold separately have subsidies. He adds that this is why batteries are currently being sold with the vehicle and that users who purchase a battery separately end up paying more.

Companies say that the government needs to bring more clarity on GST as different components of EVs have different tax rates. For instance, 5% GST is levied on EV sales whereas spare parts have 28% GST, and swappable batteries have 18% GST.

“As the cost of the battery is removed from the total vehicle cost for the users, lower tax rates will push more end-users to invest in the technology,” Arun Sreyas, CEO & Co-Founder, ﻿RACEnergy﻿ says.

GST on EV charging services by end consumers is also another aspect that needs more clarification.

Avinash Sharma, CEO and Co-Founder of charging aggregator ﻿ElectricPe﻿, says that users are now charged  18% for charging at public points as there is very less clarity.

Range anxiety continues to be one of the key hindrances in EV adoption in India. In the upcoming budget, the industry looks forward to favourable policies for charging infrastructure.

“We also look forward to higher investments towards research and development in the country to help India become a hub for EV manufacturing,” Avinash from ElectricPe shares.

The government should also provide a CAPEX subsidy of at least 40-50% to set up charging infrastructure across India.

Also, manufacturing of electronic components for EVs in India can have a Production Linked Incentive (PLI) policy like the one on Advanced Chemistry Cell (ACC), according to Ankit Mittal, CEO of Sheru, a company that network of battery swap stations for three-wheelers

Today, several components for EVs are sourced from outside the country. Encouraging local production could be the key to establishing itself as an EV hub, industry insiders say.