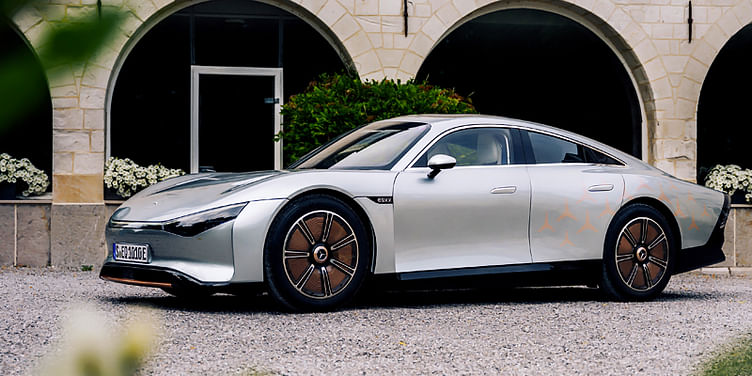 The Vision EQXX prototype, developed by Mercedes Benz along with its performance division AMG, is being promoted as the benchmark of efficiency in the EV segment

While electric vehicles (EVs) continue to grow in both popularity and share of the global market, many still have concerns about their on-road performance, especially regarding their battery range. Since EVs have a limited range on a single battery charge, it may put off people who travel long distances from buying them.

Further, inadequate charging infrastructure adds to the woes of the consumer, including those in India as the country only has 1,742 charging stations as of March this year. At present, battery swapping technology is at a very nascent stage and has only penetrated into the two-wheeler and three-wheeler segments. Range anxiety still looms large in the passenger vehicle EV segment.

Mercedes Benz, which has a string of EV projects under development, has managed to address this issue with its Vision EQXX prototype. The upcoming fully electric saloon is being touted as the most efficient EV in the world with a single-charge range of over 1,000 km. This claim has a strong backing as twice this year, the prototype electric sedan was able to breach the 1000 km mark on a single charge.

From Germany to France

The prototype made its debut in January this year at the Consumer Electronics Show (CES) in Las Vegas, USA and took on its first expedition in April where it was able to cover 1,008 km. Covering a wide range of terrains and altitudes– from Sindelfingen in Germany to Cassis in France, Vision EQXX was able to traverse through them all with 15 percent charge left on the battery which would have been good enough for almost 140 km more.

The journey was undertaken at average road speed including prolonged fast-lane cruising at up to 140 km/h on the German autobahn and near the speed limit elsewhere. This resulted in an average speed of 87.4 km/h for the entire trip which lasted for 12 hours. The average battery consumption during the entire journey was a record-breaking low of 8.7 kWh per 100 km.

From Germany to the UK

In June 2022, the German marque planned another trip for the Vision EQXX—from Stuttgart in Germany to Silverstone in the United Kingdom. This time, the challenges were different due to the hotter summer weather with temperatures of up to 30 degrees Celsius. This was coupled with increased traffic density around Stuttgart and in the southeast of England.

On this occasion, the battery-powered luxury car was able to better its previous record and cover a total distance of 1,202 km which took 14 hours and 30 minutes. The average speed on this expedition was kept at 83 km/h with maximum speeds of 140 km/h recorded. The average battery consumption this time was even lower at 8.3 kWh per 100 km.

Interestingly, on both cross-country runs, specs on the prototype electric car remained identical. Vision EQXX is powered by a 100-kWh battery which drives an electric motor churning out 241 bhp. Despite its large output, the battery pack remains compact thanks to a high energy density of 200 Wh/kg. The battery takes up 50 percent less space and weighs 30 percent less than batteries with comparable capacity.

Complementing the battery pack is a solar energy panel with 117 cells installed on its roof that can add up to 25 km of range on long-distance journeys under ideal conditions. The solar panel stored in a lightweight lithium-iron-phosphate battery is utilised in powering auto climate control, infotainment system, lights and other ancillaries. The German marque is also working towards using solar power to charge the high-voltage system.

The battery pack supplies energy to a 150 kW electric motor that is claimed to be 95% efficient. This essentially means that up to 95% of the energy from the battery ends up at the wheels. To put things into perspective, the most efficient IC (internal combustion) engine drivetrain has an efficiency of around 30%. The electric drivetrain is based on the same unit powering the upcoming Mercedes-AMG Project ONE hypercar.

Further aiding its range is its splendid aerodynamic design with a superior drag coefficient of 0.17. A sharp, sloping roofline flows gently towards the rear, giving the car the appearance of a water droplet. The prototype also gets a retractable rear diffuser which is deployed only at higher speeds when the air provides great resistance and fits seamlessly into the bodywork when retracted.

Up front, the bumper houses an air curtain which, along with the wheel covers, removes almost every last whisper of aerodynamic separation from the front wheels. Additional cooling vents are present in the bonnet to let the air in. A tear-off edge accentuated by a gloss-black end trim at its tailgate is key to its impressive aerodynamic properties even though the car measures 4,977mm in length.

The rear track is 50 mm narrower than the front further helps streamline the flow of air along the body panels. Despite a small front area, the fascia comprises some exotic details. For instance, it gets a gloss black grille that is flanked by energy-efficient headlights consisting of two star-shaped elements.

The EQXX’s cabin is futuristic with a minimalistic design draped in silky white upholstery which is pleasing to the eye. Mercedes has made use of a vegan leather alternative made from mycelium for its upholstery, which makes the cabin environment friendly. The carpets are also made from 100% bamboo fibre.

In addition, the VISION EQXX makes extensive use of recycled waste materials, such as recycled PET bottles used in a shimmering textile to enhance the floor area and door trim. The cabin layout, however, remains more or less similar to the current generation of Mercedes models.

Keeping the heat away

The design team has developed an advanced thermal management system to take care of the heat dissipated from the powertrain. This system is a combination of an innovative air-flow management setup and a cooling plate with two primary purposes—to preserve thermal energy and reduce cooling drag. Both factors contribute to maximum efficiency.

The cooling plate has been installed on the vehicle floor where the battery pack is placed enabling it to take advantage of the air flowing along the underside of Vision EQXX. This setup keeps the electric drive unit cool under normal conditions and also adds about 20 km to the overall driving range. On the other hand, the air-flow management only wakes up when the weather is hot or the driving style is “lively”.

When this happens, the shutters present at the front end of the car open up and send extra cooling air along a system of air guides through a series of inlets present in the front bumper. Even when the car gets heated at a standstill, a backup cooling fan kicks in (thermal-efficiency mode).

It will be interesting to see to what extent Mercedes will be able to retain these attributes in the production model. That said, there is no confirmation of a full-fledged production-spec version based on Vision EQXX but Mercedes would surely want to flaunt its lineup with models that could replicate this feat.