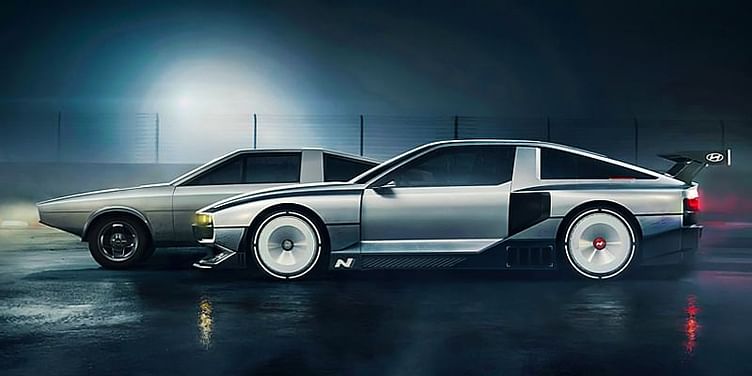 Electric vehicles (EV) have seen a growth trajectory in recent years both in terms of sales as well as technologies. At present, the primary source of electrical energy in EVs is mostly lithium-ion cells. However, automakers have started developing hydrogen-powered EVs that run on hydrogen fuel cells.

Hydrogen fuel cells are traditionally known to carry more power than conventional lithium-ion cells which is why they can be more suitable for high-performance vehicles in the future. The latest example, in this case, is the all-new N Vision 74 from Hyundai which recently broke covers at the Busan Motor Show 2022 in South Korea.

The N Vision 74 is a retro-styled sports car concept whose design is inspired by the Pony Coupe concept designed by the legendary Giorgetto Giugiaro which was showcased way back in the 1974 Turin motor show. The latter failed to reach the production stage but has been reincarnated by Hyundai’s performance division in the form of its latest N prototype.

The design illustrates its retro heritage with highlights like covered wheels and a sharp, angular roofline. The retro design has been revived and given a modern interpretation by Hyundai’s design head SangYup Lee and his team. In fact, the two-door coupe also borrows some styling inspiration from the N 2025 Vision Gran Turismo concept which made its debut at the Frankfurt Motor Show in 2015.

Aiding the car’s aerodynamics are an end-shape of the side skirt and a large spoiler mounted on the boot lid. Although the N Vision 74 Concept is not nominally an Ioniq model, it does flaunt shades of the all-electric range of crossovers from Hyundai that have been making headlines in recent months. For instance, the light signatures at the front and rear use pixel lights which are typical of the Ioniq 5 and Ioniq 6.

While the exterior is wrapped around in retro clothing, the interiors are packed with modern functionalities and hardware. N Vision 74’s interior inherits the driver-centric and piston-shaped cockpit from the Pony Coupe concept. The cabin resonates with Hyundai’s motorsport heritage with highlights like its steering wheel and seats. Performance blue details have been added to create an N-specific interior feel.

Powering N Vision 74 is a rear-wheel drive-biased twin-motor setup that dishes out a combined peak output of 670 bhp and 900 Nm of torque. The electric motors are fed by a 62.4kWh battery pack which gets charged on the go by a 95kW hydrogen fuel cell. The battery pack can be charged like any other battery electric vehicle (BEV) via an 800V fast charger while the 4.2kg hydrogen tank can be refilled in just five minutes.

This hydrogen-based powertrain results in a total claimed range of around 600 km. The car can achieve a top speed of 250 kmph. The electric sports car also benefits from active torque-vectoring thanks to the twin-motor layout. This enables the driver to tackle the corners at high speeds without losing control.

Hyundai has also devised a unique cooling system to keep this complicated powertrain within optimum temperatures. The system comprises individual cooling channels for each stack, battery, fuel cell, and motor which are controlled by a central unit. It is still unclear if the N Vision 74 will end up in production anytime soon but it has given us a glimpse of what lies ahead for performance cars and motorsports in the future.