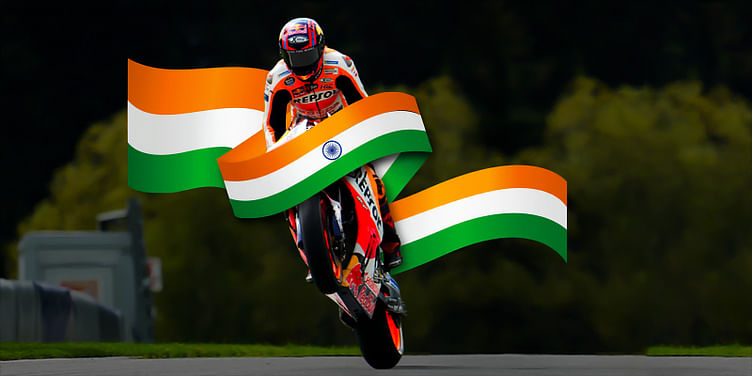 Riders from as many as 19 countries will participate in the Indian edition of MotoGP named ‘Grand Prix of Bharat’.

MotoGP is coming to India! Noida-based Fairstreet Sports and Dorna Sports—the official organisers of MotoGP—signed a Memorandum of Understanding (MoU) for seven years to bring the grand motorsport event to India.

Christened the ‘Grand Prix of Bharat’, the Indian edition of the biggest two-wheeler racing spectacle will swoon Indian motorsports enthusiasts. It will be held between 2023-24 to and 2030-31. While no official debut date is confirmed, the organisers are working round the clock to target a slot on the 2023 calendar.

Ezpeleta said, "India is a huge country and market, and an especially important one for the two-wheeled industry and MotoGP as a sport. The championship has a huge fan base, and being able to hold a MotoGP event in India would be an incredible spectacle for our fans.”

When and where will MotoGP be hosted?

The realistic possibility of slotting the Indian Grand Prix seems to be the 2024 calendar. The racing championship is most likely to be organised at the Buddh International Circuit (BIC), Greater Noida, which previously played host to Formula One races held between 2011 and 2013. At present, it is the only FIA Grade 1 racetrack in India.

The BIC needs to be homologated by the Federation Internationale de Motocyclisme (FIM) given the race track was originally built for F1 events. It may also require some tweaks to make it suitable to host the world’s highest level of two-wheeler racing. The homologation process is likely to take over a year, making it a stiff challenge to schedule the race in 2023.

Going by tradition, the Indian edition of MotoGP will be preceded by Moto3 and Moto2– junior and feeder categories. Besides, MotoGP plans to organise MotoE during the Grand Prix of Bharat which could become the first MotoE race outside Europe. The all-electric motorcycle racing series was first introduced in 2019 and has only been a sidekick event to the main MotoGP races, until now.

UP CM, Yogi Adityanath said, “It is a matter of great pride for Uttar Pradesh to host such a globally prestigious mega sports event. Not only will the event boost the hospitality and tourism sectors, but it will also put UP on the global platform. Our government will provide all the necessary support to make this event a huge success."

Echoing similar sentiments Minister for Industrial Development, Uttar Pradesh Nand Gopal “Nandi” said, "The event will not only be a boon to motorcycle racing fans but also provide a major impetus to the economy by generating an influx of foreign investments and ushering in advancement in the personal transportation industry which would transcend into global investments and a preferred destination for OEM’s in the state of Uttar Pradesh."

It isn’t the first time that BIC has explored hosting a major international two-wheeler series. A few years ago, there were plans to host a round of the World Superbike Championship at the track. However, after several postponements, the marquee event was called off.

The elusive MotoGP event is estimated to directly or indirectly generate employment for as many as 50,000 individuals, with 5,000 jobs for the race weekend only. This year, motorsport in India received a big boost when the all-electric Formula E championship was announced to be held in Hyderabad in February 2023.