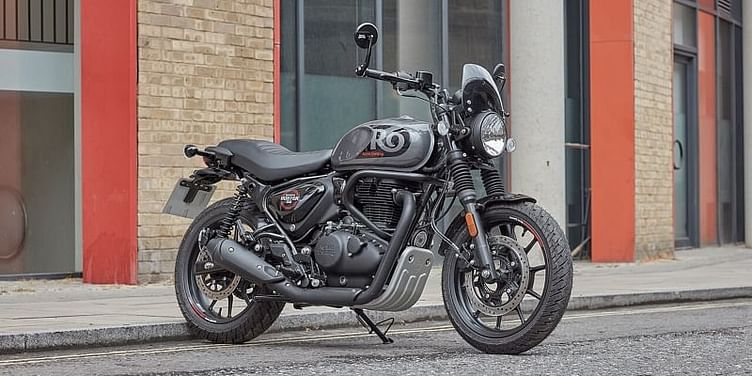 Royal Enfield Hunter 350 will take on other modern retro roadsters such as Honda CB350 RS and the recently launched TVS Ronin.

The highly anticipated Royal Enfield Hunter 350 has finally made inroads into the Indian market. With prices starting at Rs 1.50 lakh (ex-showroom), Hunter has become the most affordable offering from the Chennai-based motorcycle brand. It is based on the same J-series platform that underpins other 350cc models such as Classic and Meteor.

Royal Enfield Hunter also receives the same 350cc heart as its siblings. However, Hunter features a slightly modified chassis and powertrain to suit its characteristics. Royal Enfield is offering two trims of the modern retro roadster–Retro and Metro. The Metro trim is further divided into two variants–Metro Dapper and Metro Rebel which are priced at Rs 1.65 lakh and Rs 1.69 lakh (ex-showroom), respectively.

Customers can opt from eight colour options, of which two will solely be offered through Royal Enfield’s Make It Yours (MIY) module via the company’s website. The base Retro variant is available in two shades–Factory Black and Factory Silver. The Metro trim can be had in six paint schemes–Dapper White, Dapper Ash, Dapper Grey (MIY), Rebel Black, Rebel Blue, and Rebel Red (MIY).

Hunter 350 wears all-new clothing, which is different from the rest of the Royal Enfield lineup, although it does retain the retro styling cues typical of the brand. This includes round headlamps, taillamps, turn indicators, a teardrop-shaped fuel tank, and fork gaiters on the front suspension. Other visual highlights include split grab rails for the pillion, blacked-out internals, a single-piece seat with a ribbed pattern, and a stubby side-slung exhaust canister.

While Hunter 350 is essentially based on the same J-series platform as Meteor and Classic, it has undergone some crucial changes. For instance, it gets a new steering geometry which, accompanied by the retuned chassis, offers a different character to the bike. Revised positioning of the footpegs and handlebar offers a slightly aggressive rider’s triangle, which also hints at the bike’s sportier intent.

At 177 kilos (181 kg for the higher variant), Hunter is the lightest 350cc model from the company. This puts a positive impact on the bike’s power-to-weight ratio. It is also the smallest bike from Royal Enfield’s stable, with a wheelbase of 1370mm and a sharper rake angle of 25 degrees (compared to 26 degrees in Classic 350), which improves the motorcycle’s agility, cornering, and stability.

The modified twin downtube frame rests on 41mm telescopic forks up front and twin shock absorbers at the rear. While the base Retro variant runs on 17-inch wire-spoked wheels with knobby tyres, the Metro variant rolls on blacked-out alloy wheels of the same size. The Metro variant also gets thicker front and rear rubbers of 110/70 and 140/70 sections, compared to 100/80 and 120/80 sections in Retro.

Stopping duties are handled by a 300mm disc brake at the front as standard with a drum brake and 270mm disc at the rear for the Retro and Metro variants respectively. The base trim makes do with a single-channel ABS, whereas the top-spec trim gets dual-channel ABS. The top-end trim benefits from an LED taillight while the base variant gets bulb units. Halogen turn indicators are standard on both variants although buyers can upgrade them to LED units through the accessories package.

The Retro variant also misses out on a centre stand. Another prominent feature is the off-set semi-digital circular instrument console similar to the one seen in Scram 411 and Meteor. The tripper navigation pod will be offered only as an optional accessory through the MIY module. The seat height is accessible at 800mm, and the fuel tank has a capacity of 13 litres.

Hunter 350 draws its power from the same J-series 349cc, single-cylinder, air-cooled engine that puts out 20.2 hp at 6,100 rpm and a peak torque of 27 Nm at 4000 rpm. However, the ignition timing and the engine have been tweaked to suit Hunter’s sportier nature. This engine is mated to a 5-speed gearbox via a wet-multi-plate clutch.