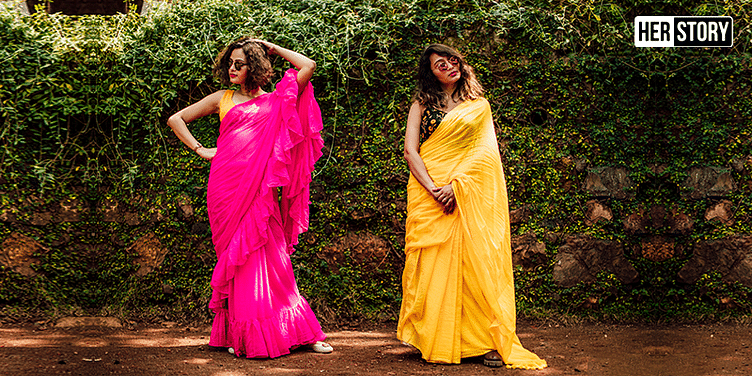 For sisters, Sujata and Taniya, the coming together of Suta was organic and natural, prompted by their love for textiles and memories of childhood.

An old rickety wardrobe. Layers of red, green, orange, and blue with an occasional hint of gold and silver. The familiar feeling of the soft, six yards of pure elegance.

Saree. For some it’s a heavy drape meant for special occasions, but for few others the word evokes emotions. It’s synonymous with the fond memories of childhood; of your mother’s layered cupboards and grandmother’s soft touch.

A feeling that sisters-turned-entrepreneurs Sujata and Taniya Biswas are familiar with, growing up in Kharagpur and various parts of eastern India.

Years later, it’s this love for drapes and the memories attached that prompted the two to quit their corporate jobs and embark on this magical journey of handloom with Suta. A house of hand woven sarees, sourced from the quaint villages of India.

The journey for Suta officially began in 2016. The siblings’ love affair with drapes, however, had started since their childhood days.

They recall, “As kids, we played hide and seek in the garden where our grandmother used to dry her sarees. We ran around them and felt the softest, fragrant fabric on our faces and skin.”

These memories lingered even when they were older and became a part of the corporate grind.

Sujata, who did her engineering from CET Bhubaneswar and MBA from IIFT Delhi, has an experience of close to eight years working across the Essar group, Jindal group and IIT Bombay.

Taniya, also an engineer and IIM Lucknow graduate, worked for almost three years with the Tata group and IBM. Together, the sisters believe they have the perfect right-left brain combination; an ideal team that resulted in the inception of this Mumbai-based saree brand.

“Our love for textiles and art forms and a strong will to empower very talented and deserving artisans, made us quit and take a big step towards our dream,” says Su and Ta , quickly adding, “the magic of thread, drew us like a magnet.”

Their coming together cannot be better captured than with the word Suta, which means thread and is also a portmanteau of their names – Su(jata) and Ta(niya). “We were elated with the fairy-tale like coincidence of the syllables in our names. It felt it was meant to be,” they add.

For the love of ‘loom’

Born of passion, Suta’s journey hasn’t been without obstacles. After quitting their cushy corporate jobs, the sisters grappled with many ideas, even tried their hands at product photoshoots, before realising that their true potential was not in the pictures but in the products itself.

“We had designed a few clothes and had posted them, but instead of getting requests for shoot we were asked about the products,” Sujata says.

What followed next was a quick pivot, and a hunt for the right fabric and skilled weavers, across the nooks and crannies of rural India. The search, Sujata and Taniya explained, took them to the remote villages of Madhya Pradesh; Meghalaya; the home of Banarasi sarees - Varanasi; Maniabandha in Odisha; the district of Kutch in Gujarat; and West Bengal; where they currently have their two offices - in Shantipur, in Nadia district, and Dhaniakhali.

From two young women bitten by the entrepreneurship bug to a team of 20 in Mumbai and 50 weavers around the country, Suta has since grown by leaps and bounds. Its exquisite handloom sarees, in varieties of jamdani weave, malmal, malkesh, banarasi, and fully handwoven ones, are now shipped across the country and to international markets. The venture itself, however, had humble beginnings.

Soon, Sujata and Taniya would rope in an entire neighbourhood of weavers into the business, laying the foundation of what has become an microeconomy in the nearby villages of Shantipur and Dhaniakhali.

“The weavers feel very proud of what they do,” they say, “and now that they have a stable income they are considering bringing their next generation into the same business instead of losing their ancestral craft.”

Say hello to the ‘Suta Queens’

Each saree has its own story -Sujata and Taniya swear by this philosophy.

A reason why every single piece from the Suta label is unique, distinctive, and evokes an entirely different sense of aesthetics. That they are targeting a very niche and contemporary market, is evident in the vey way they christen each saree – Violaceae, Heart of Wood, Desert Rose, Mockingbird, Shankho, Kalo Jonaki, Shorshe Phool, Cinnamon Dust, and so on. But when it comes to their happy family of customers, lovingly called ‘Suta Queens’, the sister duo makes no discrimination.

“We make sarees that anyone can drape, from a three-year-old to a 100-year-old. It’s fuss free,” they say adding, “It reeks of innocence yet looks the sexiest.”

One look at the Suta Bombay page and you would understand what they are talking about. Instead of going the typical ecommerce way, their social media marketing involves posting pictures of the muses, accompanied by colourful stories. Sometimes, the hero in these picture posts is the saree and on other occasions, the spotlight is on the Suta Queens.

“Our Instagram page reflect who we both are,” quips the duo. “In each post we try to talk either about the saree story, some anecdote, or trivia about saree, or the story of the draper.”

There’s a certain greatness in humility, in starting small, and in knowing one’s worth for what it is. For, Sujata and Taniya , this meant taking slow and steady steps, growing their business organically, and finding stability before chasing the big numbers.

When it was just the two of them, they took care of every chore to cut down on costs, wherever possible. “From sweeping the office to packing a saree to shipping, we did it all on our own. We even took trains rather than hailing a cab for our vendor meets,” they recall.

When asked about their lowest low, Sujata instantly recalls a 2017 incident when their stall at The Lil flea, an exhibition in Mumbai, caught fire. She was five months pregnant at the time, and seeing the precious inventory on blaze hit too close to the heart.

“Holding the sarees that were either sullied with mud or fire”, she says it “felt like holding your wounded child in your arms”.

They were fallen indeed, but not broken.

In moments of crisis, Sujata and Taniya leaned on their family, and more importantly, on each other. Just a year and a half apart in age, the sisters have continued to bring in their own unique talents to the table, helping the brand grow strength to strength. “We are at a revenue of 5.5 crore this year, MoM growth is around 10 percent,” they reveal. Their target for the next year is to double their top line.

For the sisters, in these past three years, Suta has become more than just a business.

As Taniya says, “Suta, for us, isn’t just work. It’s a part of our life. It’s mingled with our personal lives completely.”