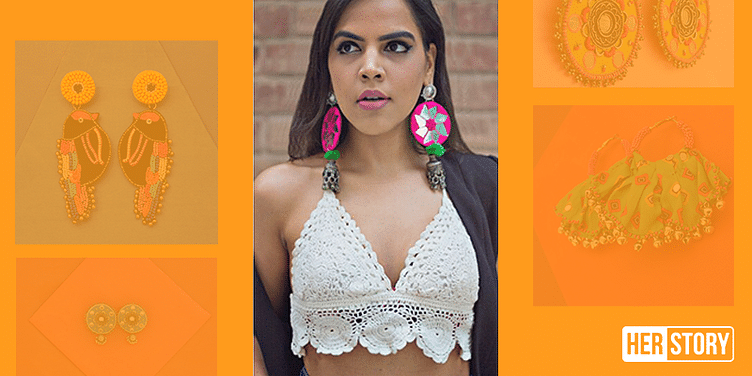 Started by Gursakhi Luganiin 2016, Gurugram-based NakhreWaali is an online store for handcrafted contemporary accessories and garments.

Gursakhi Lugani was fast asleep in her apartment in Gurugram when her phone started ringing. The person at the other end said, “Saw Masaba wearing your earrings at a party. Could I source them for Sonam?”

It was a call from Rhea Kapoor asking for the earrings she had designed on behalf of her sister, actor Sonam Kapoor.

This was just the beginning, says Gursakhi Lugani, the 26-year-old founder of NakhreWaali, an online store for handcrafted contemporary accessories and garments, she began in 2016.

This is an example of how passion grew wings to become a lucrative profession, with Gursakhi bagging prominent clients, including Bollywood actor Sonam Kapoor, designer Masaba Gupta, actress and stand-up comedian Mallika Dua, journalist Nandini Bhalla, and film producer Guneet Monga, among others.

After graduating from the University of Delhi, Gursakhi started her career in the corporate world, first with Google, and later for a US-based HR consultancy.

But she was itching to do something different. Her heart was no longer in the corporate world. “I was not getting the satisfaction I was looking for,” says Gursakhi.

She continued working but freelanced in fashion on the side.

“I used to attend a lot of fashion weeks and often made DIY (do-it-yourself) jewellery from old curtains and bed sheets at home,” she says.

While attending a fashion event, Gursakhi met Cosmpolitan editor Nandini Bhalla. “She stopped me and asked if she could buy my earrings.” Nandini also clicked a picture of the pair and posted it on Instagram. This later came to be known as NakhreWaali’s Pataka.

Now confident she was getting somewhere, in July 2016, Gursakhi resigned and started NakhreWaali in October the same year.

The celebrities began coming. Masaba Gupta spotted her Nakhras for the first at the Lakme Fashion Week. “She has made five more purchases in the last two years,” says Gursakhi.

Attention to detail has always been Gursakhi’s strong point, whether it was in her corporate job or with NakhreWaali’s designs.“Detailing has worked in my favour,” she says.

Her designs are diverse and “different” from those that exist in the market. For inspiration, Gursakhi travelled to several villages across Rajasthan (Pushkar and in-and-around Jaipur), Gujarat and North-east India (Manipur, Mizoram, Nagaland) and to Bangladesh to study and understand handicrafts. “I learnt about coin jewellery from Nagaland,” she says.

“Young India does not value Indian handicrafts since it is projected in a very stereotypical way. Patola has mostly been done on a saree and phulkari on a dupatta," she says.

Gursakhi wanted to use traditional textiles in a way that they appeared contemporary and is broadly accepted and flaunted by the millennial.

Her first collection was a curation of these raw materials. Gursakhi then hired karigars and set up a workshop and office in Gurugram.

Starting something new came with its fair share of challenges and scepticism.

“When I was starting up, aunties would ask ‘Boutique kholegi?’ (Will you start a boutique?). They thought it was just a pastime and I could not make it big,” says Gursakhi.

However, societal challenges were not the only barriers she had to overcome. Recalling NakhreWaali’s initial days, Gursakhi says that when she was exploring handicrafts in the North-East, she found it difficult to communicate with the artists.

"People from Bangladesh have come and settled there. They didn't know Hindi or English and felt threatened if outsiders approached them," she adds.

However, she persisted with the help of sign language and got her work done.

NakhreWaali, like most renowned brands, also saw its designs being ripped off.

“I have sold 200 NakhreWaali blouses, but there are around 2,000 women wearing a copy. Initially,I felt bad and also spent a lot of money suing people who copied the designs. But now, all that doesn’t matter. Imitation is the best form of flattery,” she says.

Similarly, NakhreWaali’s collection 'Please Stand Up' supports the LGBTQ community and is inspired by different parts of the body.

All products from NakhreWaali are handcrafted and so they are sold at a premium. A pair of earrings start at Rs 1,300 and can go up to Rs 6,800.

Besides statement earrings, other products in the jewellery section include nose rings, neck accessories, bangles, haathphool and head accessories. It also has bags.

The brand also has a variety of blouses as well, which are mostly inspired by Bollywood movie characters.

Although NakhreWaali caters to a niche market, Gursakhi has launched a few other products for the masses such as notebooks and keychains.

“I plan to launch a collection for the masses in 2019. Those would be smaller work wear earrings, but with some ‘Nakhra’ on them,” says Gursakhi.

NakhreWaali has a five-member core team - including Anushka Anant, the design head and Mehnaz ‘Bhaiya’ from Bihar, who is the head karigar. Under Mehnaz, there are 10 other karigars or artisans, who work day-in and day-out to handcraft the Nakhras.

Gursakhi has another seven employees handling the packaging, and a small team of photographers. Overall, NakhreWaali is 45-member strong team. The company has tied up with ShipRocket as its logistic partner.

Gursakhi started NakhreWaali by investing Rs 5 lakh from her savings. Bootstrapped so far, it is planning to raise its first round of funding this year.

According to Gursakhi, Mumbai and Delhi account for 60 percent of NakhreWaali's sales. “The other 40 percent is from Bengaluru, Pune, Kolkata and Punjab.”

Gursakhi, who is determined to make it big, plans to launch an experience store in Bengaluru or Hyderabad in the near future.

“NakhreWaali is standing up for who you are and being proud of your nakhras," says Gursakhi.

She believes that through her products, she is selling an emotion, an experience.

This 13-year-old has launched a personal care product line for teens, earns Rs 1.2 lakh in a month