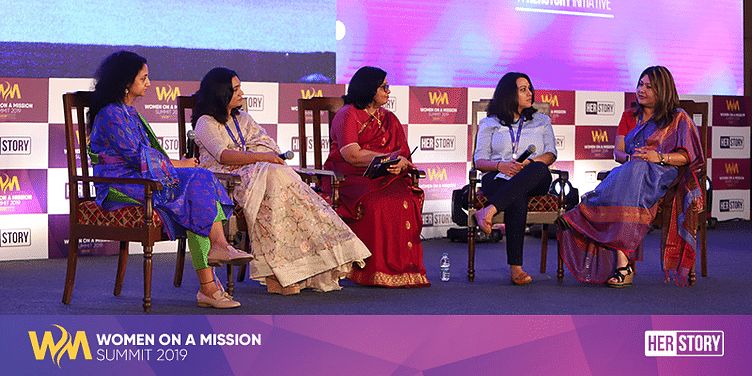 At HerStory’s Women on a Mission Summit 2019, a women-centric panel focused on the importance of workplace diversity and how they are making diversity and inclusion a part of their organisations.

The world has woken up to the fact that no country can fully develop if half its population is left behind. That’s why businesses, small and big, have made gender diversity their rallying cry.

An October 2017 report from Avtar Group, a talent strategy consulting firm, revealed that the number of women employed in corporate India touched 31 percent, rising from 25 percent in 2016. The number of women in India’s workforce may be climbing, but there’s a lot more that needs to be done.

Speaking about diversity, Vishpala said: “When you talk about inclusion, you want everyone to feel welcome - race, age, religion, ethnicity, gender etc. And that is an important conversation we need to have.”

It is clear that organisations are looking at gender diversity and inclusion closely and seriously. Things have changed from how they were a few years ago.

Citing an example, Vishpala said: “We have come a long way. I remember several years back, interview questions for women would mainly be whether they were married or if they were expecting a child. Many believed that would be a deterrent. Many believed women wouldn’t focus on their career if they were pregnant or were getting married. Today, that has changed.”

And yet there are biases. Because, as Tina said, organisations are a part of the larger society. To work around this it is important to accept that these biases exist, and you need to find solutions that work for everyone.

The need for inclusion

Tanushree, of AB InBev, said that it was important to hire women and give them the right space to work. “The only thing holding women back is bias; what we think of ourselves and what others think. Anyone who breaks that barrier creates history, like Sudha Murthy’s story of working on the shop floor,” she said.

It is important that each individual in the organisation pushes through, and women take their chances and raise their hand more. Tanushree said,

“We have to raise our hand on promotions, career path, and salary hikes."

Esha of Servify said that boardrooms are largely made up of middle-aged men. “Steps are being taken, but we still have a long way to go,” she said.

Most enterprises have accepted the functional need for diversity. Research has shown that a diverse group of people is more productive and has the ability to come up with innovative ideas.

“Diversity, inclusion, and equality are the key pillars that ensure sustainability. You need time, effort, and focused action,” Esha said. “ To ensure diversity, you need to think with empathy and with your heart,” Esha added.

Clearly, diversity is the way ahead, and it’s critical for the leadership team, and the men, to play a pivotal role. For as Theresa J Whitmarsh, Executive Director of the Washington State Investment Board, famously said at Davos 2016: “If you exclude 50 percent of the talent pool, it’s no wonder you find yourself in a war for talent.”

A stitch here, a snip there: How Lavanya Nalli made her presence felt in her age-old family business