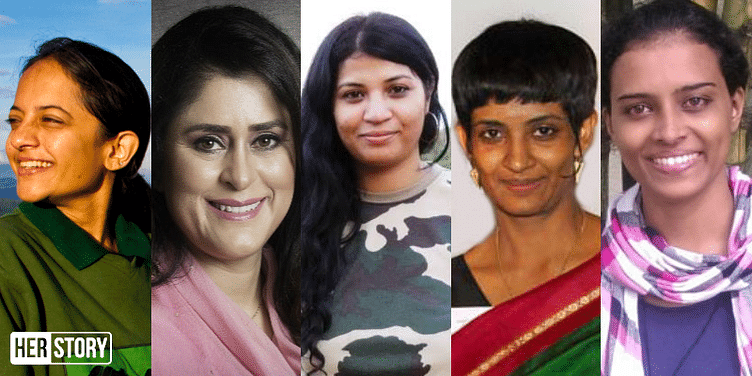 On World Earth Day, we briefly explore the stories of five Indian women tirelessly working towards keeping our environment healthy, often risking their lives for the cause.

Also read: This summer, save birds from the scorching heat by taking up the #BirdBathChallenge

Every day, trees are being ruthlessly cut down to expand infrastructure, and wild animals killed for wandering outside their ruined habitats in search of shelter and food.

So, this World Earth Day, we focus on the importance of preserving and rehabilitating flora and fauna.

Here are five women who have dedicated their lives to saving the environment, so that we can enjoy a greener and safer tomorrow.

Holding a PhD in Environmental Science and Policy from Duke University and a M.E.Sc from Yale University, Krithi Karanth's research about wildlife conservation in India spans over 20 years of studying human impact on the environment. Most of her work takes place in the Western Ghats, which is home to a variety of flora and fauna.

Krithi has conducted many studies that delve into the patterns of species distribution and extinction, consequences of wildlife tourism, human-wildlife interaction, and more. She has published over 90 articles and co-authored a children's book about Indian animals. She has also mentored over 120 young scientists and worked with more than 500 science volunteers.

For her prolific work, Krithi has received grants from the Indian government, and organisations like the National Science Foundation (NSF), the National Geographic Society, and the Society for Conservation Biology (SCB). She is also among the recipients of the 2019 Women in Discovery Award by WINGS Worldquest.

India's 'Tiger Princess' Latika Nath constantly braves near-death experiences to study tigers in their natural habitats - the wild and treacherous  jungles. She holds a PhD in Tiger Conservation from the University of Oxford, and is India's first woman wildlife biologist to hold this degree.

Latika began her career at the Indian National Trust for Art and Cultural Heritage (INTACH) where she coordinated the activities of its 172 regional offices, working on the issue of river pollution in Rajasthan. She then conducted extensive research about the wildlife corridors in eastern Madhya Pradesh between 1994 and 1997 through the Wildlife Institute of India (WII). She was also involved in project design for Terai Wetland Conservation in Nepal, where she worked on creating new natural facilities such as watering holes and territories for the tigers there.

In 2005, Latika Nath founded Wild India Resorts (Kanha) that aims to establish model eco-resorts across the country. Subsequently in 2008, she founded the Singinawa Conservation Foundation that works with park authorities and tribal communities to protect the ecosystem through education and health drives, and alternate energy programmes. In 2018, she unveiled her book of wildlife photography titled ‘Hidden India’.

Purnima Devi Barman, who grew up in rural Assam, has been working towards saving the Greater Adjutant Stork, or the hargilla as it is known in local parlance, from extinction. Once common across Southeast Asian wetlands, only about a thousand of them remain today, with the majority situated in Assam, making it an endangered species.

Local residents who used to consider the hargilla unwelcome because of its haggard appearance and carnivorous diet consisting of carcasses, now accept the bird and embrace it as a part of their society, thanks to Purnima Devi Barman's efforts. She incorporated the bird's character into Durga Puja celebrations, wove them into folk songs, made clothes with their motifs, and addressed public gatherings about protecting the hargilla.

Despite facing mockery for being a woman in wildlife conservation, Purnima Devi Barman went on to receive the UNDP India Biodiversity from the United Nations and was accredited with the title 'Earth Hero' by the Royal Bank of Scotland in 2016. She also received the Whitley Award, dubbed as the 'Green Oscar',  in 2017. Today she leads a self-help group of over 200 women called the 'Hargilla Army' towards the conservation of the endangered birds.

Also read: How to climb a wooden tower in a sari? The story of one woman and an endangered bird

An Earth Studies graduate from the British Open University, Suprabha Seshan is an environmentalist focusing on the importance of nurturing existing links between people and their environment. Her work takes place in the endangered forest land of the Gurukula Botanical Sanctuary, situated in the Wayanad forests of Kerala, which was founded in 1981 by German conservationist Wolfgang Theuerkauf.

Suprabha Seshan moves away from conventional theories about simple conservation of existing landscapes, and emphasises on their healing and restoration instead. Through the Gurukula Botanical Sanctuary, Suprabha Seshan trains horticulturists, children, teachers, other scientific researchers and policymakers, in environment conservation through tours and study programmes.

For her extensive research and work, Suprabha Seshan was elected to the Ashoka Fellowship in 2005, and also received the prestigious Whitley Award in 2006.

Conservation Ecologist Jis Sebastian enthusiastically works with plants and animals to help preserve the environment, but her speciality is studying the distribution pattern of orchids in the Western Ghats. From trekking across rough terrain, and climbing trees to reach the flowers high up in their canopies across altitudes ranging between 30 and 2,000 metres, Jis Sebastian has studied the distribution of epiphytic orchids to understand how their environmental conditions can indicate climate change.

Despite her enthusiasm and grit, Jis Sebastian still faces gender-based discrimination by forest officials. But she pays no heed and continues on her path, hoping to pave the way for other women in the field of environmental conservation.

In 2018, Jis Sebastian began working on a project to restore orchids in Wayanad, Kerala. She also took up the task of cleaning up the scenic village of Parunthumpara, where unregulated tourism added to the problem of environmental destruction.