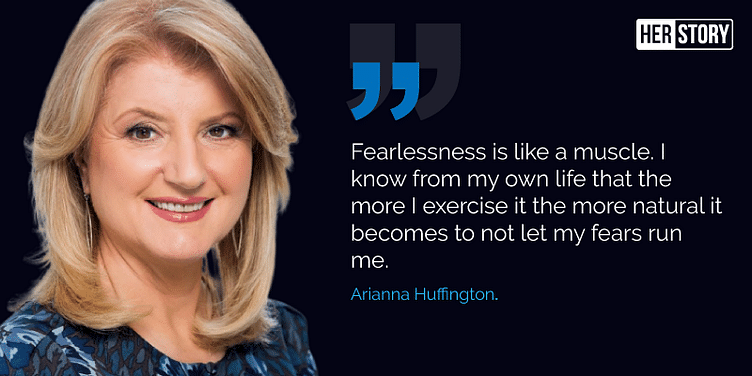 Inspirational quotes from these women will inspire you to be brave and move ahead in life with courage. The first step to tackle these is simple - take the first step.

If you ever choose to make a list of what scares you and what doesn’t, it is most likely that the one with things you fear is going to be longer. That’s because we fear so many things - speaking up, standing up for what is right, fighting for better wages, asking for equal rights, putting ourselves first, accepting our vulnerabilities - and the list goes on.

The first step to tackle these is simple - take the first step. Once you decide to battle your fears and conquer one thing on the list, the rest becomes relatively easy. It is that first step towards standing up for yourself, irrespective of whether you fail, falter or succeed, is what sets the ball rolling.

Here are 10 inspirational quotes from women who embraced their vulnerabilities, showed immense courage and did not let failure put them on the back burner.

“The fastest way to break the cycle of perfectionism and become fearless is to give up the idea of doing it perfectly – indeed to embrace uncertainty and imperfection.” Arianna Huffington, Founder of Huffington Post, author and businesswoman

“The most courageous act is still to think for yourself. Aloud.” – Coco Chanel, entrepreneur and fashion designer

“Being FEARLESS isn't being 100 percent Not FEARFUL, it's being terrified but you jump anyway...” - Taylor Swift, singer and songwriter

“One of the hallmarks of happiness is having close, meaningful connections with others. But keeping up a facade of having it all together keeps us isolated because it keeps us from forging real, honest, deep relationships where we can fully be ourselves and feel accepted exactly as we are.” - Reshma Saujani, Founder and CEO of Girls Who Code

“Think like a queen. A queen is not afraid to fail. Failure is another stepping stone to greatness.” - Oprah Winfrey, producer and television mogul

“It’s a courageous act to just be with whatever is happening at the moment — all of it, the difficult as well as the wonderful.” — Eileen Fisher, Founder and Chairwoman of Eileen Fisher Inc.

“I am constantly amazed at how courageous and radical speaking the truth is.” — Melissa Etheridge, singer, songwriter and activist