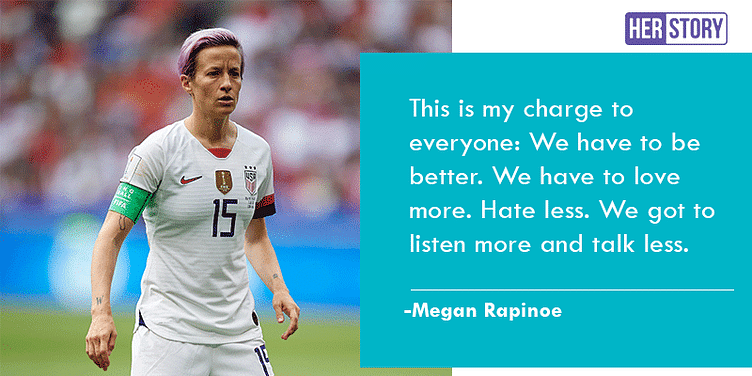 US football player Megan Rapinoe is riding high after the 2019 Women’s World Cup victory. Here are 12 inspirational quotes from the powerhouse.

Megan Rapinoe and the US Women's Soccer team has been in news for not just their great performance, but also the conversation around pay gap. The victorious team, which returned to the US after lifting the 2019 Women's World Cup, was honoured with a World Cup victory parade in the New York City.

The team has attracted their fair share of attention not just for their game, but for also driving the point about gender pay gap between the men and women's team. Given they are outperforming the men's team and still paid less, it is no wonder then that when they won, the crowds in the stadium continued to chant "equal pay."

This is the squad's fourth World Cup as they campaign for pay equity. Co-captain Megan Rapinoe at the parade took to stage and thanked her team calling then badass and unfazed. She had the world taking note of the fact that she and her team are unstoppable. When she took to the stage, Megan showed us what it takes to win. She was open, unabashed when she said,

“I couldn’t be more proud to be a co-captain with Carli and Alex on this team. It’s my absolute honor to lead this team out on the field. There’s no place I’d rather be, even in the presidential race. I’m busy, I’m sorry.”

Megan continues to inspire for she stands by her commitment to not just pay for her nation but to also not give up asking for equal pay. Here are 10 inspirational quotes from Megan that will inspire you to chase your goals.

“I take playing for my country very seriously. It's a huge honor.”

“Being a woman, we talk about equal pay all the time. We're not talking about if you're black or if you are Latina. I would like to get back to that and improving the relationship between the police community and the community of color. I don't know exactly all the right things to say, but I want to engage in that conversation.”

“This is my charge to everybody, Do what you can. Do what you have to do. Step outside of yourself. Be more. Be better. Be bigger than you’ve ever been before.”

“Be honest about how you approach failure. Don't just be critical of yourself, because that can be self-serving. Approach it honestly, assess your performance, and assess the areas where you have fallen short. Correct them and move on. Don't dwell on it. Don't hold on to it.”

“I play a certain style. I'm not willing to compromise that part of me.”

“Some people play best when they're frustrated and mad. I play my best when I'm happy. I really, truly do.”

“I've always been a risk taker. Growing up, I had a lot of freedom and room to roam and do what I wanted, and I think that's a huge part of my game.”

“Putting yourself out there is hard, but it's so worth it. I don't think anyone who has ever spoken out, or stood up or had a brave moment, has regretted it. It's empowering and confidence-building and inspiring. Not only to other people, but to yourself.”

Inspirational quotes from 4 Indian sportswomen to get you fired up