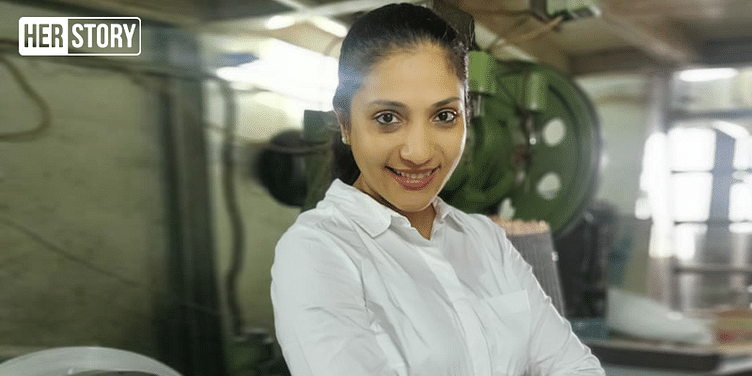 Sheetal Talati, owner of Pushpa Industries, took over her father’s business after his untimely death and overcame different challenges to grow and build his dream. She has grown the facility's manufacturing capacity by 5.5 percent from when she took over.

Based in Mumbai, Pushpa Industries is in the business of manufacturing heat transfer equipment. Exactly, 10 years ago, Sheetal Talati took over the reins of the family business after the untimely death of her father, Rohit Talati.

“It’s been 10 years, and we’ve received countless awards for being the best and business is good. I still miss my father everyday, but every time there’s a victory at work, I feel closer to him and finally it’s not just his dream... it’s ours."

Sheetal opens up to HerStory on how she took over her father’s business, became a self-taught entrepreneur, and charted a new course for its growth.

Losing an anchor is always difficult

Sheetal recalls how she and her two sisters were raised to be strong, independent, and smart by their father right from childhood.“He didn’t care about us getting married; we were always told to focus on making something of ourselves.”

Driven by this energy, Sheetal excelled in academics and also indulged in her love for drawing, while her father focused on building his empire. But life had something else in store.

Recollecting her last memory of her father, she says, “My father’s untimely demise came as a sudden blow to all of us. We were not prepared for it. In fact, just the night before he passed away, he had come home rather late and I remember chatting with him about taking a break. But he told me that his work was in its golden period and there was no stopping right now. He also shared his dream of taking the company to the next level. When he passed away, our lives turned upside down and I lost my hero overnight. Even though I was grieving, the promise I made him fuelled a fire inside me.”

In the face of loss, she decided to give wings to her father’s dreams.

"I did not want to let his hard work go in vain. In fact, I took over just 10 days after my loss and resumed work as usual with our existing clients."

Pushpa Industries was started in 1987 by Rohit Talati.The company is one of the leading coil manufacturers in Maharashtra, claims the 34-year-old. It manufactures all types of heating and cooling coils for air conditioners, AHUs, package units, FCUs, chillers, dryers, cold storage, refrigeration products, etc. It also provides coils and components to leading brands like Blue Star, Voltas, Hitachi, Daikin, and LG, among others.

When Sheetal took over the company in 2007, it had seven employees. Since, then Pushpa Industries has grown to 18 employees who form the core team, and includes managers, engineers, and accountants.

Young, dealing with her father’s loss, and with no one to hold her hand through the business, things were challenging for Sheetal. Older employees were worried how she would manage the company as she battled offers for a buyout.

“Our clients asked, ‘who’s the new boss’ and when they were told it was a young lady, they all left - I lost all our existing clients within a week. For a while, I went to work and had nothing to do but switch the lights off at the end of the day. I felt like a failure,” she says.

However, Sheetal was determined to turn things around and plunged headlong into learning. Some of the older employees helped and supported her in learning the ropes, and her father’s extensive notes helped her on the job.

“I began to read his words and it was as though he was guiding me; I felt confident again. I taught myself everything - from technical stuff like electrical wiring to running the show, I took on every role,” she says

She enrolled in a course on air conditioning and refrigeration at Father Agnel College, an “all-boys’ course” in Mumbai, after requesting special permission from the administration, to understand the nitty-gritties of manufacturing.

She focused on building processes and systems to remove all chances of error. “I feel processes are extremely important in my industry, to improve output and efficiency. I made mistakes and faced rejections, but thankfully, my commitment to learn kept me on the right track.”

To allay the fears and insecurities of the employees, she ensured they received increments and incentives on a regular basis.

She also reached out to the clients the company had lost. “When we lost business initially, I personally called up a lot of clients to retain them. I assured them that my father’s demise would not come in the way of fulfilling their orders, and requested them to continue having faith in the company. At the same time, I had all employees keep a strong focus on quality and excellence, and in doing what they could to create flawless products.”

In 2007, the unit had the capacity to manufacture 55,000 coils in a year. Since then, the company has seen an expansion in terms of labour and machinery. The current installed capacity stands at 360,000 coils per annum.

Sheetal adds, “We have an excellent tool room for research and development. Our product development team works closely towards clIents’ requirements and quality controls.”

Its manufacturing unit located in Sewri has 30 labourers working in two shifts. In the past 12 years, the company has successfully achieved its target growth of 15 percent in a year.

In fact, in 2018, the company saw a growth of 18 percent in its annual turnover. In the future, Sheetal is looking to grow the business and is also eyeing the international market.

Being in a male-dominated industry like manufacturing, Sheetal didn’t have any role models to look up to or emulate. She has been told multiple times that she got orders because she is a girl. On the flip side, clients and vendors have often walked into office demanding to speak with the boss, expecting a male to be in charge.

She has advice to others like her in this industry. “I remember how challenging it was for me when I started off, but then I decided to be my own role model. I didn’t shy away because I was the only female manufacturer in the HVAC and R industry then. I am hoping that if I can hold my ground through perseverance and courage, it will inspire other women to also charter this path, and this is what keeps me going.”

Sheetal still continues to face challenges, though not the ones she started out with.

"One of the biggest challenges is straddling different roles – I am a mother, wife, daughter-in-law, and the boss, all together! There are many who expect mothers to not work, but look after their kids. I’ve often been questioned why I need to work when my husband is professionally stable. Random people offer unsolicited advice all the time. I believe it is sentiments like these that force almost 60-70 percent of women to give up their careers," she says.

Sheetal is happy that she has been able to give wings to her father’s dreams and is also grateful for the learnings from the journey. Each new relationship she has forged has taught her something new.

“The last 10 years have been full of risks, hard work, and learning. I am not afraid to look back. The mistakes I made in the past have helped me improvise and become the individual I am today,” she says.

She touches upon an important learning that she says will stay with her throughout.

"Educate yourself at every stage. It is a lifelong process. One of the most important things my father taught me was to make each day count, by learning something new. In other words - chasing knowledge and learning, over money. When I took over the reins, this approach helped me immensely to focus on learning the ropes of the work, and win back the clients we had lost. This is a practice I continue to follow and I’m really grateful to him for teaching it to me."