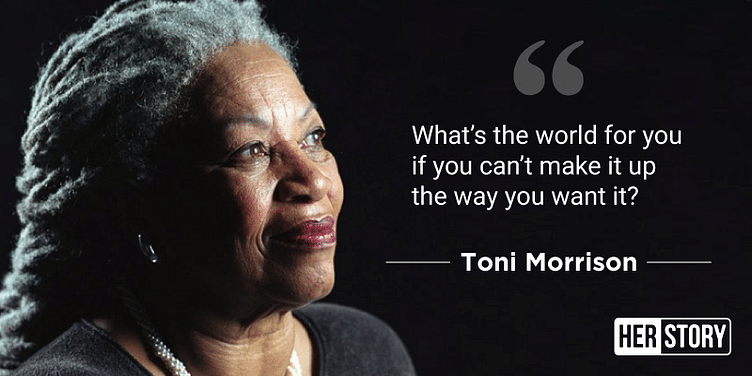 As we remember the legend Toni Morrison we look at inspirational quotes by her that are timeless and will always continue to inspire.

Toni Morrison is the first African-American woman to win the Nobel Prize in Literature in 1993. She authored multiple novels, children’s books and essay collections. One of her most popular and well-loved books Beloved won her the Pulitzer Prize in 1988 and also the American Book Award.

She passed away on Monday at the age of 88. As Barack Obama, the 44th President of the US, stated in his eulogy on social media:

“Time is no match for Toni Morrison. In her writing, she sometimes toyed with it, warping and creasing it, bending it to her masterful will. In her life’s story, too, she treated time non-traditionally. A child of the Great Migration who’d lifted up new, more diverse voices in American literature as an editor, Toni didn’t publish her first novel until she was 39 years old. From there followed an ascendant career — a Pulitzer, a Nobel, and so much more — and with it, a fusion of the African American story within the American story. Toni Morrison was a national treasure. Her writing was not just beautiful but meaningful—a challenge to our conscience and a call to greater empathy. She was as good a storyteller, as captivating, in person as she was on the page. And so even as Michelle and I mourn her loss and send our warmest sympathies to her family and friends, we know that her stories — that our stories — will always be with us, and with those who come after, and on and on, for all time.”

As the world mourns the loss of Toni Morrison, the African American novelist, essayist, editor and teacher we look at some of her inspirational quotes that have over the years inspired not just her readers but generations of writers and authors:

“You wanna fly, you got to give up the shit that weighs you down.”

“Definitions belong to the definers, not the defined.”

“You can’t own a human being. You can’t lose what you don’t own.”

“Writing is really a way of thinking – not just feeling but thinking about things that are disparate, unresolved, mysterious, problematic or just sweet.”

“Something that is loved is never lost.”

You need to define who you are: 12 inspirational quotes from Michelle Obama