10 historic ‘firsts’ by women in the last decade 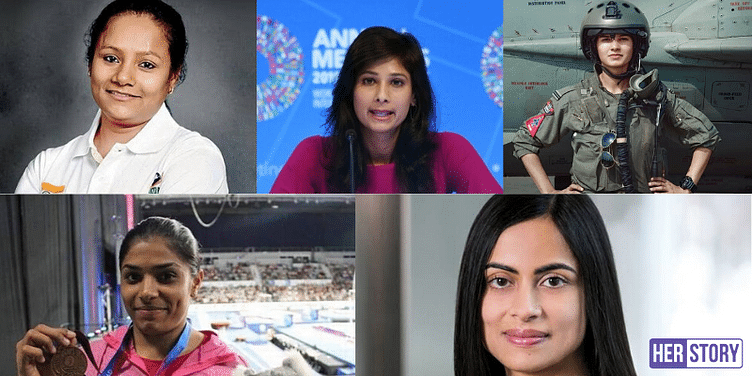 Here is looking back at the last decade in which several women became the first to achieve what they set out to do.

In the last decade, we have seen many women become pioneers. They have broken glass ceilings, conquered mountains and achieved many new feats. With the new decade approaching, it is inspiring to look back and see women be the ‘firsts’ in many fields and stand as inspirations for generations to come.

Presenting 10 women with “first-of-its-kind” achievements in the last decade.

Arunima Sinha is the first female amputee to climb Mount Everest. She achieved the feat in 2013, two years after she lost her leg when pushed from a running train by thieves. She is also the world’s first female amputee to conquer Mount Vinson, the highest peak in Antarctica. The 30-year-old has also summited Mount Kilimanjaro in Africa, Mount Kosciuszko in Australia, Mount Elbrus in Europe, and Mount Aconcagua in South America. Arunima is a Padma Shri awardee.

Gita Gopinath became the first Indian woman to be appointed as the chief economist at the International Monetary Fund (IMF) in 2018. The Harvard educated economist is the second Indian after Amartya Sen to receive permanent membership in the Economics Department at Harvard.

In 2011, she was chosen as a Young Global Leader by the World Economic Forum. In 2014, she was named in the Top 25 Economists under 45 list by the IMF. She was awarded the Pravasi Bharatiya Samman, the highest honour for a person of Indian origin. She was also named in the Bloomberg 50 by Bloomberg Businessweek in December 2019.

Flight Lieutenant Avani Chaturvedi became the first Indian woman fighter pilot to fly solo in a Mig-21 in 2018. The MiG-21 aircraft is known to have the highest take off and landing speed in the world at 340 kmph, making her achievement even more inspiring.  Along with her cohorts, Bhawana Kanth and Mohana Singh Jitarwal, the trio became the first women combat pilots of the Indian Air Force. They were inducted in the IAF Fighter Squadron in June 2016.

Aruna Reddy became the first Indian gymnast to win a medal at the Gymnastics World Cup. She won the bronze in women’s vault at the World Cup held in Melbourne. The 23-year-old gymnast trained for over 13 years before she was able to achieve this feat. The Hyderabad native also has a black belt in Karate and was a trainer before she joined gymnastics. She is supported by the Go Sports Foundation under the Rahul Dravid Athlete Mentorship Programme.

Dhivya Suryadevara became the first female CFO of General Motors, when she was appointed to the post in 2018. Born and raised in Chennai, she is a chartered accountant and has degrees from Ethiraj College of Women and University of Madras. She also holds an MBA from Harvard Business School. She joined GM in 2004 and since then, has climbed the ranks to the top of the organisation.

Sudha Balakrishnan became the first ever CFO of RBI in May 2018. Before taking over as CFO, she was vice president with the National Securities Depository Ltd (NSDL), India’s first and largest depository. She will be the 12th executive director of RBI and will have a term of three years. Sudha is a chartered accountant and was selected for the position after a search by RBI that lasted for a year.

She will be in charge of the government and bank account department, which processes government transactions like payments and revenue collections such as taxes. She will manage the RBI balance sheet and oversee the central bank’s investments in India and abroad.

Seema Rao is the first Indian woman commando trainer. Breaking into the male-dominated sphere, Seema has trained over 15,000 soldiers in a close quarter battle. She is also a qualified medical doctor and has an MBA in crisis management. She is one of only 10 women in the world who is trained in Bruce Lee’s developed martial art form of Jeet Kune Do.

Mary Kom became the first boxer in the history of the AIBA World Championships to win eight medals in the world meet. At this year's championship, she won the bronze in the 51 kg category. She has six gold medals from her previous attempts.The World Olympians Association granted her the use of post-nominal letters OLY, which signifies a sports person's ongoing role in society as an Olympian, living and promoting Olympic values.

Hima Das was the first Indian athlete to win gold at the IAAF World Under 20 Athletics Championship. She went on to win gold and silver medals at the Asian Games held in Jakarta in 2018.In July this year, Hima won five gold medals at various events in Poland and the Czech Republic. She made it to the ‘Forbes India 30 Under 30’ list. She has also been appointed as the country’s first youth ambassador to UNICEF India this year.

Looking back at 2019: What we can learn from the most powerful voices of the year