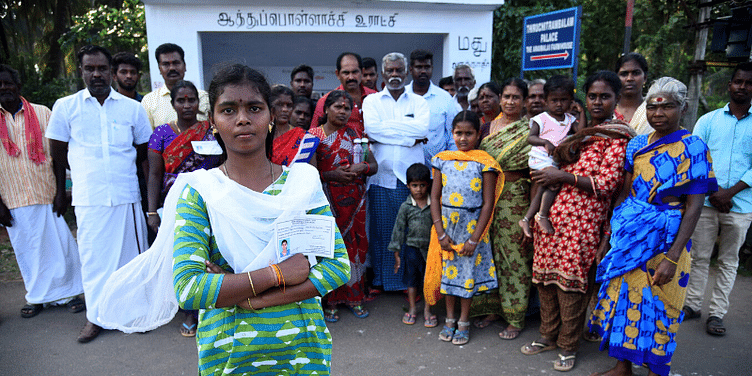 Saranya, an independent candidate defeated candidates from major political parties and won the election by a margin of 37 votes in the MK Nagar ward.

Saranya Kumari K, a differently-abled Dalit woman from Pollachi has won the local body elections in Tamil Nadu. The 22-year-old won by a margin of 37 votes and was elected the ward member of Aathu Pollachi panchayat which comes under the Anaimalai Union in Coimbatore district on January 2.

Saranya was three when a viral fever affected her nerves and left her unable to use her legs. Earlier she was not able to walk without support. With constant exercise, she can now manage to walk independently.

She canvassed the area for seven days and walked for hours to gather the support of voters. The hard work reaped benefits when the election results were announced on January 2, which also happened to be her birthday. The lone independent candidate for the ward, she defeated other candidates from major political parties. She secured 137 votes out of the total 470 votes in the ward.

"Forty houses in a region of my ward do not have drinking water supply. Also, the public toilets are not well maintained, most of the streetlights are non-functional and the place right in front of my house filled with sewage is a home for breeding mosquitoes. I will be addressing these issues one after the other,” Saranya was quoted after her win by a news website.

Saranya has been actively participating in social activities for the last three years. She regularly represents her area at the Collector's grievance meetings, has taught government school students for free, and members of her area about voting. She, along with Rotaract Club volunteers, has also helped renovate a bus stop, which was misused by drunkards.

Her victory, she stated to a news website, was not just a win for her community but also a personal win. Her contesting the election united her parents who had separated four years ago. Saranya's parents, Kittan and Saraswathi, are both daily wage labourers.

A first-year MA Tamil Literature student at Government Arts College, Udumalpet, Saranya aspires to become a Tamil teacher and believes that education is as important as politics.

3 reasons why girls outshine boys in board exams