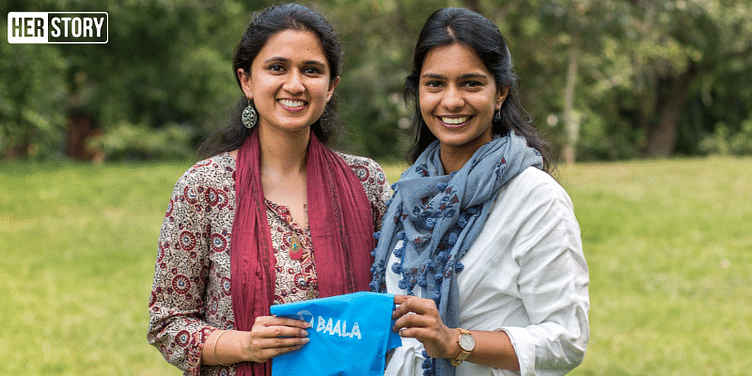 To tackle the the lack of access to proper menstrual facilities and awareness about menstrual hygiene and health in rural areas, Soumya Dabriwal started Project Baala in 2016.

Soumya was a student at the University of Warwick, England when she volunteered in Haryana and Ghana as a teacher. During this time, she discovered the common side of menstrual hygiene problems in both countries. Troubled by girls missing out on school and following unhygienic practices like using cloth rags, Soumya started the social initiative while she was still in college.

After returning to India in August 2016, she took up a job at a development company but continued to run Project Baala. However, while working in various rural areas, she understood the magnitude of the problem and after seeing the response to her project, she quit her job in 2017 to focus on Project Baala full time.

In 2018, she was joined by Aradhana Rai Gupta, a Cornell alumna who helps co-lead the organisation. Both the 24-year-olds visit villages and urban slums and distribute Baala pads and impart menstrual hygiene awareness to women and girls.

Starting from a garage with Rs 10,000, this woman entrepreneur is now making crores with her herbal beauty startup

The cause of hygiene

Baala pads are cloth pads that are designed to last up to two years. “They solve the problem of accessibility and disposal for women and girls,” says Aradhana. The pads are manufactured in their production unit in Delhi with some orders outsourced to a local manufacturer. Project Baala’s pads have reached 1,50,000 women and girls in 16 states of India. It also has a small team in Nepal and pads are also distributed in Ghana and Tanzania.

According to Dasra, a philanthropic organisation, only 48 percent of adolescent girls are aware of menstruation before their first period. Menstruation, especially in rural areas, is still a taboo topic and is plagued with myths and misinformation that leads to unhygienic practices. Project Baala conducts menstrual hygiene management sessions along with pad distribution to dispel the misinformation and myths.

The eight-part workshop is a fun and interactive session for women and girls that covers topics ranging from the process of menstruation, how to deal with pain, environmental implications, when to visit a doctor and more. Project Baala’s community outreach team of 60 women help conduct these workshops in various regions of the country. In Nepal, a small team imparts the workshop in the local language and in Ghana and Tanzania, partner organisations help distribute pads and conduct workshops.

“Awareness is a big part of the work we do. There are so many myths and taboos that get passed on from older generations and there is no breaking of the cycle of these taboos because women don't talk about their periods. They live in a bubble, which keeps getting passed on because there is no external intervention. So, we come in to break the cycle of misinformation and provide relevant information,” says Soumya.

Due to periods usually being considered a closed-door topic, it was difficult for the team to conduct these workshops. They decided to bring at least 100 women and girls for a workshop to help normalise the conversation instead of a small group. A small group would make it seem like a “behind the doors” conversation.

“If you can mobilise thousands of people and talk about voting, why can't you talk about a biological phenomenon,” asks Soumya.

However, the team still faced challenges. Women would take really long to even start speaking. Another challenge was to affect the behavioural change in women. Women were not convinced that Rs 190 for two years of their menstrual hygiene was an important investment.

They were able to navigate these problems through interactions with the community and learnings from on-field work.

Following the spread of coronavirus and the subsequent lockdown, Project Baala understood that women, especially from marginalised communities would face difficulties in accessing pads. Since the lockdown began, the team has distributed 18,000 pads in the urban slums of Delhi and other regions.

They have also digitised their workshop to help women receive information about health and hygiene even during this time.

Project Baala aims to reach 10 million women and girls by 2025.

“Our mission is to solve all issues associated with unsafe menstrual hygiene practices, not just in India, but in marginalised communities all over the world. That is something that we've been working towards for the last three years,” says Aradhana.

Involving more tech-based solutions in their work, Project Baala will launch an app Baala Boss in May to help bridge the gap between urban and rural women. Women who wish to engage with rural communities and help the organisation with onground work can connect through the app. It is also going to launch an audiobook about menstrual hygiene, which can be accessed by calling a toll-free number from any phone. It will be available in 14 languages.

Talking about the impact of the work, Soumya recalls how women in Alwar district, Rajasthan where they conducted their workshops two years ago remember everything they were taught. On recent visits, they noticed that women have become changemakers and are educating women and girls in nearby villages too.

“In the last two years, there's definitely been an openness to talk about menstruation in urban and semi-urban areas with movies like Padman. We have seen a huge shift in beliefs, practices and attitude towards menstruation in areas we have worked in. However, I believe we still have a long way to go,” Soumya adds.