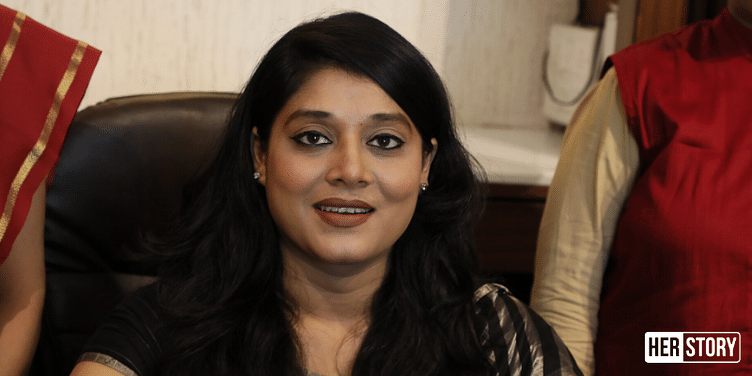 Aastha Ritu Garg, is the founder of Padmashali, a saree startup that works with 100 weavers across the country to revive the weaving and handloom crafts industry.

Like most young girls, Aastha Ritu Garg too was in awe of her mother’s saree collection and would always dream of wearing them when she grew up.

The incredible variety of sarees her mother owned and her fascination towards them would one day prompt her awakening as an entrepreneur and work towards the revival of the handloom sector.

“Being a connoisseur of authentic Indian weaves, Ma’s wardrobe was a medley of colours, textures and weaves, assembled from various parts of India, caught my fancy. I would spend a little time every day observing my mother getting dressed for the day and then spend a lot of time after trying to perfect the drape on myself,” Astha tells HerStory.

An additional love for Indian heritage and culture was passed to her by her father who would take her to attend flute recitals and ghazal nights. Every trip around the country would involve supporting the cottage industry, traditional handicrafts and handlooms.

Even though she loved Indian handlooms and weaves, fashion was never a career choice for her. Deciding to take up ‘conventional jobs’ she worked as Area Sales Manager for a leading coffee shop chain but her heart and mind, she says “remained elsewhere.” Eventually, she quit her job and reignited her childhood passion and started Padmashali that works towards reviving dying weaving and handloom crafts across the country.

Putting her city on the fashion map

Aastha got married and settled in an industrial town, Jagadhri in Haryana which is famed for its production of metalware. She noticed that even though it was a rich city, it lacked stores that offered fashionable clothes. For festive shopping, people would rather travel 100 km to Chandigarh or to Delhi to buy clothes.

“I wanted to put my city on the fashion map of India,” she says. This sentiment led her to start up and launch her label in April 2019 with a capital of Rs 8 lakh.

Having no professional degree in fashion or experience in the clothing and apparel sector, she says that the starting up process was both “nerve-wracking and exciting”.

“There is no force stronger than your determination when you have set your mind and heart on something that truly reflects what you stand for. I knew Padmashali was the dream I wanted to turn into reality, and I began envisioning the mission behind it,” she adds.

When looking for inspiration for her startup’s institution, Aastha recollected a tale from the ancient Hindu scripture, Vishnu Puran, which chronicles the birth of an enigmatic persona from the navel of Vishnu, who wove a beautiful fabric out of intricate thread work from the petals of a lotus flower. He came to be known as Padmashali where padma means the lotus and shali means to weave in Sanskrit. This led Aastha to name her startup after Padmashali who is revered as the first known weaver recorded in Indian scriptures.

Hoping to revive ancient weaving traditions and arts, Aastha dove deeper into the subject, travelled extensively to identify weavers to collaborate with, where she learnt about the art and science behind handlooms from heritage artisans. Padmashali works with 100 weavers from 10 clusters all over India. These clusters have weavers with mastery in weaves from Banaras, Kanchipuram, Bhuj, Ajrakhpur, Patan, Chanderi, Pranpur, Kota, Bhagalpur, and Sanganer.

To authentically present age-old art and craft of weaving, Aastha not only sources finished goods from these weavers, but also fabrics and raw materials.

She claims to have served approximately 750 customers in the first year of operations with a customer base in India, the US, Dubai, Malaysia and raking in revenue worth Rs 30 lakh.

As a woman entrepreneur

The path of entrepreneurship comes with its own set of challenges. For some, gender bias and discrimination also come into play.

“As a young woman I have had to work harder to prove myself. Nobody likes to take orders from you. You are constantly juggling between work and life. From weavers to senior staff, the compliance to your word comes only after you have gained their trust. You must find the way to patiently and politely get your work done. It is not an easy task,” says the 28-year-old entrepreneur.

Supporting other women through her startup, Aastha says that she consciously employs women as she feels that “empowered women empower women”. Her six-member team, apart from the 100 weavers is an all-women team supporting operations.

Running a business during COVID-19

Businesses during the global pandemic have increasingly pivoted or expanded their product line, digitised their operations or rethought their business model in order to continue operations during these difficult times.

For Aastha, the global pandemic has been a game changer as well. It forced her to re-evaluate her business model and launch a webstore for online shopping. She has also launched a virtual walkthrough service through video calls for customers to shop from the comfort of their homes.

However her costs went up with an increase in the prices of raw material by 20 percent, and it was available only on cash payment and not credit.

In the future, Aastha is already planning to expand her offline retail presence in Chandigarh by the end of 2021.