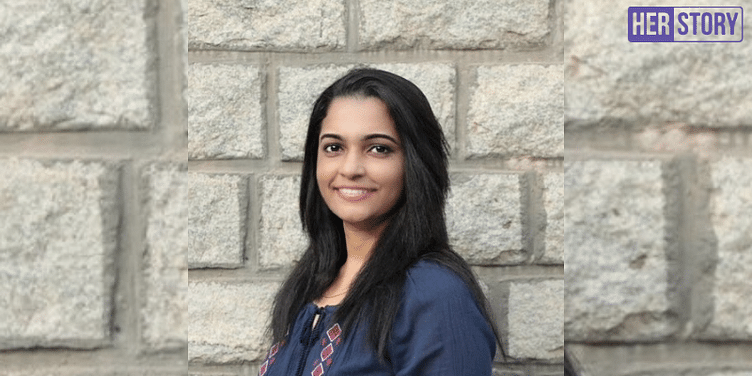 Nisary Mahesh founded HerMoneyTalks, a portal that aims to bridge the gap in financial literacy and planning for women.

A DSP Winvestor Pulse 2019 survey in association with research agency Nielsen reported that just 33 percent of women make independent investments. Only 20 percent women understood financial concepts according to data from the 2017 Global Financial Literacy Excellence Center study on the gender gap in financial literacy. In India, the gender gap in economic participation amounts to 66 percent, according to a 2018 World Economic Forum report.

This 24-year-old Chennai girl is changing a woman's world with education, financial literacy, and Inner Goddess

The need to be financially independent

Nisary was very young when her father taught her to be financially independent. After school hours, he would ask her to work for the family business and independently handle banking transactions at a young age.

“At that time I thought he was too harsh on me. However, now I am realising the benefit of that. Everything from my career to business and financial planning, I have been doing a lot of things on my own and that is a good feeling,” Nisary tells HerStory.

Nisary worked in the banking field for eight years with several banks and insurance companies which was her first-hand experience of the low financial independence that women had. She noticed the same lack of financial independence amongst women that she came across in her first entrepreneurial venture, Hubwords Media, an online branding, digital marketing and content services company.

Speaking from experience, Nisary says she has seen women handle their finances very badly, or known of widows who had no clue where their husbands had invested their money, or were duped or scammed of their money because they did not know how and where to invest. Women are often advised by their husbands or family members and prefer not to participate in financial decision making.

Nisary and her co-founder Hemant Gorur, former editorial head of ﻿Bank Bazaar﻿, wanted to do their bit in helping disseminate financial literacy for women. This led them to start HerMoneyTalks in 2019. Nisary runs the operations from Thrissur, Kerala and Hemant from Bengaluru, Karnataka.

The startup is now in the process of adding a marketplace for financial products like investments plans, loans, etc. that cater exclusively to women, which is expected to be launched next month.

When asked about the need for an exclusive platform for women, Nisary says, “Everywhere people are talking about women’s empowerment, but they are restricted to skilling and recruitment. So, we created a one-stop financial platform to address all their financial worries and help them.”

She adds, “Also, most financial portals and fintech brands talk in a ‘male language’ and mostly address men. If women go to a financial site, they get confused and immediately hand over the decision making to men. We felt we should talk to them in a language they understand and have an exclusive platform."

According to Nisary, the platform addresses the need to build confidence among women regarding their finances, create awareness, provide more accessibility and handholds them to a guided purchase. It has also created peer groups and forums for women to meet and interact both offline and online.

A ‘Trivago’ of financial services

The bootstrapped startup offers both free and paid services to women for mentoring and advisory services. It currently has a community of 25,000 women and hopes to reach one lakh women by the end of this financial year and three lakh women by 2022. It is rapidly expanding its focus to more cities and is looking forward to reach urban and semi-urban women across the country. It also plans to create new city chapters and peer groups in Delhi, Chennai and Mumbai.

“We want to become a ‘Trivago’ of financial services for women where all the choices and options are available to women,” says Nisary.

During the coronavirus pandemic, though the revenues for HerMoneyTalks have taken a hit, it has used the time to prepare a new marketplace feature. It has mentored over 60 people online, helped women who have lost their jobs due to COVID-19 and helped women entrepreneurs get visibility on its platform. It also conducted free workshops to help women arrange their finances when the stock markets plunged due to the global health crisis.