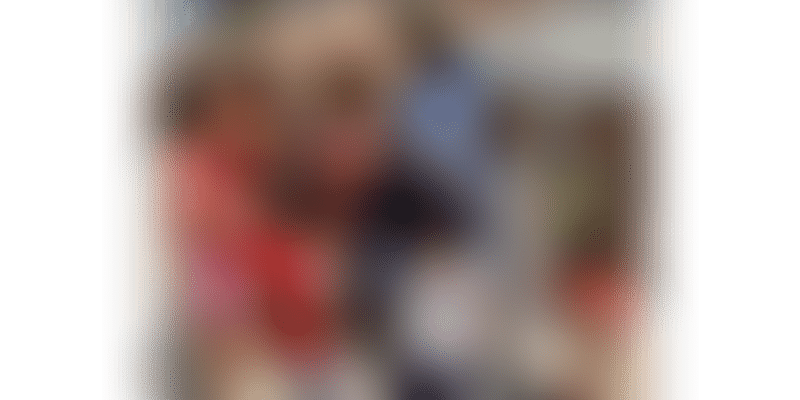 With support from her brother, Paytm’s Vijay Shekhar Sharma, social entrepreneur Uma envisions building an India where every child gets access to quality higher education without having to migrate to urban cities.

Growing up in a household where putting others before yourself was upheld as sacrosanct taught Uma Pathak the importance of and the joy that comes in giving.

A resident of Aligarh, Uttar Pradesh, Uma believes it is her moral obligation to help people in whatever way she can, although she’s most passionate about education.

The eldest among four siblings, Uma’s father - a school principal - played an important role in the way she saw the world around her. Education, she says, is one of the most important tools the youth of India has today - and her work reflects her belief unreservedly.

After she graduated from college with a bachelor’s degree in education, Uma started teaching at a school in the city, free of charge. In 2018, she quit her job to dedicate her life to education and uplifting poverty-stricken children, and founded an organisation in her father’s name - the SPS Foundation.

Education, food, hygiene, and sanitation for poor children are some of the core missions of the organisation, and Uma is personally involved in each project the foundation undertakes.

“If I can make a difference in even one child’s life, I will be happy. Happy though, not satisfied, because I want to keep working untill I can impact as many people as possible,” Uma says.

Apart from educating children that hail from economically disadvantaged families, teaching them about hygiene, sanitation and nutrition, Uma and the Foundation have undertaken several renovation projects around Aligarh to help make government schools and colleges better equipped to provide quality education in a safe environment.

The projects are mostly funded by her younger brother, Vijay Shekhar Sharma’s Paytm.

Education of girls is also a cause close to Uma’s heart.

Most schools in rural India only impart education up to grade 12. To pursue graduate education, students have to move to cities and gain admissions in colleges there - and that doesn’t sit well with their parents who fear the worst for their daughters.

Uma wants to change this scenario by not only taking girl students under her wing and helping them travel to cities to gain higher education, but also bolstering the higher education system in villages itself, so that the problem is fixed at the source.

“I want girls to pursue their passions and become whatever they want to irrespective of the location of colleges and opportunities. Villages in India need stronger higher education systems, and I will keep working towards the day when distance and location are no longer obstacles in students’ paths,” Uma says.

Her initiative to educate and uplift girls is commendable, but more importantly, necessary.

In a report published by the National Commission for Protection of Child Rights in 2018, it was revealed that nearly 40 percent of 15 to 18-year-old-girls were not attending school, and almost 65 percent of them were engaged in household chores.

These numbers are alarming especially since Prime Minister Narendra Modi has made a big push for education of girls through his ‘Beti Bachao, Beti Padhao' campaign.

Another study said that Indian women contribute only 18 percent to the country’s GDP, and only 25 percent of the labour force in India is women.

Uma says she wants to change these numbers, and help bring more and more women from rural areas into the folds of the mainstream Indian economy via the labour force.

“The perception of girls’ education in India is changing. Most parents today are supportive of their girls travelling to the city to get an education, especially after they get to know me and are reassured that I, a woman, will keep them safe and help them grow,” Uma says.

An inspiration for many young girls, Uma believes that education is not only a key to success, but also the only way to break the cycle of poverty.

The duo also provided thousands of water bottles, freshly cooked meals and take-home dry and wet food packets to migrant labourers who made long, arduous journeys back home on foot.

To aid and assist corona-warriors, Uma arranged for packets of biscuits and bottles of water and provided personal protective equipment such as gloves and masks.

“I firmly believe that if it is the duty of corona warriors to provide healthcare to infected patients, it is our duty to support them in any way we can,” she says.

Next on her very busy to-do list is to continue supporting migrant workers and their families and working on her lifelong dream of educating as many children as she can.