With more than 120 narrators on board, this platform is spinning stories in indigenous Indian languages 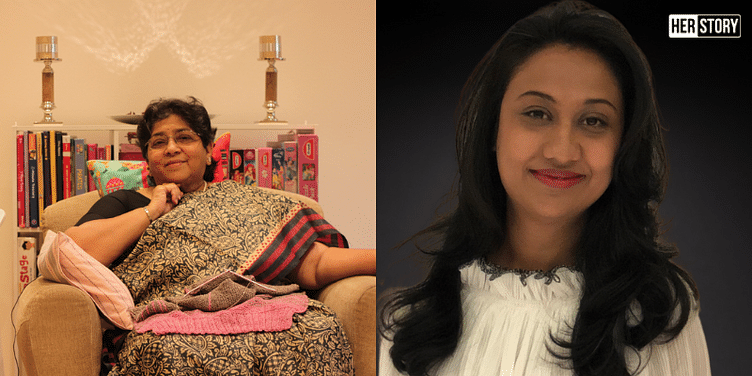 Reading stories to children expands their horizons and stirs their imagination. As people, native languages, and culture get drowned in the bustle of city life, a mother and daughter-in-law duo from Mumbai is helping people embrace storytelling in pure indigenous languages.

In 2018, Madhurata Deshmukh and her daughter-in-law Shikha Dalmia founded Spin A Yarn India. The platform has now evolved into a voluntary-based community of more than 120 narrators, mostly comprising older people, whose storytelling sessions are recorded and streamed on YouTube, Facebook, and Instagram.

“Children shy away from speaking in their mother tongue. It is really bothersome that society values and gives recognition for speaking in English. The next generation should know they are blessed with diverse cultures,” Shikha tells HerStory.

Madhurata adds, “The mission is to become a primary outlet for children-focused content by encouraging the participation of India’s latent indigenous story-telling creativity, knowledge, and culture.”

The platform allows children to read, watch or listen to narrations on its website and has recently announced the launch of its magazine by and for children. Students across schools in Mumbai have formed a core group to take charge of creating, editing and publishing the content. Based on a monthly subscription, it will be available from April, 2021.

Spin A Yarn India is the only organisation in the country to partner with UNESCO when 2019 was declared the international year of indigenous languages to preserve and promote the diverse languages of India.

It now hosts the Read Aloud project in over 600 schools through a partnership with the government of India’s Bhasha Sangam Initiative. The event is organised twice a year where parents come to school and read to groups of students.

The regular reading sessions online has gained momentum post COVID-19. The elderly storytellers who were earlier sceptical of the reach online are embracing the medium as they see their children working from home and the little ones attending classes virtually.

Rama Kejriwal joined the platform as a narrator on her granddaughter Raaya’s insistence. She says, “I was scared and a bit shy in front of the camera initially but the team helped me overcome my fears. Our first recording had so many glitches, but they were extremely patient and the experience was wonderful.”

Gul Malani is a performer at heart and enjoys writing about parenting and the role of grandparents. “I usually sing songs or narrate stories at a club on weekends and thought of reaching a wider audience with Spin A Yarn India was great and help children learn the languages and culture,” he shares.

More recently, Shikha started a new series called Daughters of India, inspired by her eight-year-old daughter who also narrated the first programme about the achievements of mountain climber Anurima Sinha.

Shikha says her daughter was reading the Goodnight Series for Rebel Girls and saw only two Indian women listed in the book.

“She had learnt about many extraordinary women in their classroom and wanted to amplify their work. These are not necessarily historical figures but women whose achievements have gone unheard. For example, there are five women who received Bharat Ratna but not many know about them and we wanted to throw light on these things,” Shikha adds.

A jewellery designer and entrepreneur for over two decades, Shikha is self-financing the expenses for Spin A Yarn India. The duo plans on monetising through brand partnerships just enough to sustain the operations. Shikha believes it will also add value and make people take the platform more seriously.

“The startup is too close to our hearts to make it a profit-driven company and lose sight of our motives,” she explains.

A mother of two, Shikha’s children were growing up in an intercultural family where Shikha hails from a Marwari background and her mother-in-law is Maharashtrian.

When she wanted to teach them the native languages two years back, the duo saw that the content and resources available were not good enough. “While the animations and stories are fine, the language used is not authentic and ‘very Bombay’ like using tum instead of ‘aap’ (which is the honorific term to address someone)”

That is when Shikha and Madhurata took it upon themselves to read to the children. Over time, they grew so fond of the storytelling sessions that once when Madhurata was away for six months, they asked her to record and send them.

Shikha says this laid the foundation for Spin A Yarn in late 2018. Nearly two years later, especially amid the pandemic, the platform is helping children and older people engage in meaningful stories.