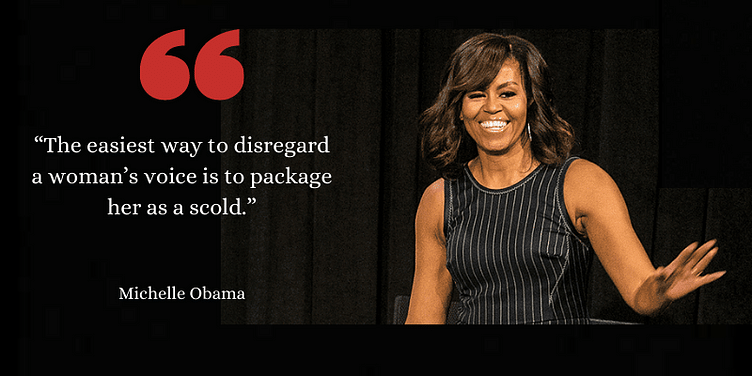 As feminist champion and former first lady Michelle Obama turns 57, here are some powerful quotes from her memoir, Becoming.

Former first lady Michelle Obama is an inspiration for people across generations.

Through her roller-coaster of a journey from a humble upbringing in the south side of Chicago, graduating from Princeton and Harvard University, and becoming the first lady, her enthusiasm of learning and commitment towards encouraging young girls, women, and people of minority background has remained constant.

Last month, a Gallup poll revealed that Michelle Obama is the most admired woman of 2020.

She has shared her awe-inspiring story of the values she grew up with, female friendships, and always being on the journey of growth.

As Michelle Obama turns 57, here are 15 powerful quotes from her memoir, Becoming.

“Failure is a feeling long before it becomes an actual result. It’s vulnerability that breeds with self-doubt and then is escalated, often deliberately, by fear.”

“We were planting seeds of change, the fruit of which we might never see. We had to be patient.”

“Time, as far as my father was concerned, was a gift you gave to other people.”

“Everyone on earth, they'd tell us, was carrying around an unseen history, and that alone deserved some tolerance.”

“Now I think it’s one of the most useless questions an adult can ask a child - what do you want to be when you grow up? As if growing up is finite. As if at some point you become something and that’s the end.”

“Friendships between women, as any woman will tell you, are built of a thousand small kindnesses... swapped back and forth and over again.”

“This may be the fundamental problem with caring a lot about what others think: it can put you on the established path.”

“If you don’t get out there and define yourself, you’ll be quickly and inaccurately defined by others.”

“There is power in allowing yourself to be known and heard, in owning your unique story, in using your authentic voice. And there’s grace in being willing to know and hear others. This, for me, is how we become.”

“Let’s invite one another in. Maybe then we can begin to fear less, to make fewer wrong assumptions, to let go of the biases and stereotypes that unnecessarily divide us.”

“You may live in the world as it is but you can still work to create a world as it should be.”

“At fifty-four, I am still in progress, and I hope that I always will be.”

"The lesson being that in life you control what you can."

“You’ve got to be twice as good to get half as far.”