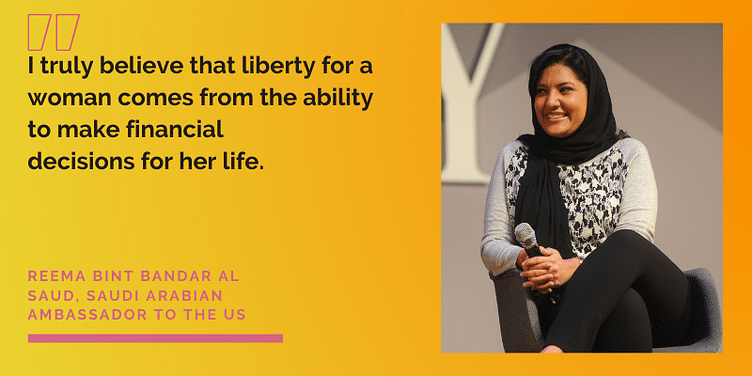 Financial security empowers women to tackle other biases in society. Here are 10 quotes on the importance of financial independence that will inspire women to work towards it.

The call for women’s financial independence could not have been clearer than in Virginia Woolf’s writing — "A woman needs money and a room of her own if she is to be able to write."

Many decades later, financial freedom and equal right towards managing money and other assets continue to be a struggle for many women in several parts of the world. However, attaining such freedom can boost their decision-making power and confidence.

Here are 10 quotes on the importance of financial independence that will inspire women to work towards it.

“Financial independence is paramount. My mom always says that when a woman is financially independent, she has the ability to live life on her own terms. I think that was the soundest advice that I ever got. No matter where you go in life or who you get married to, you have to be financially independent — whether you use it or not,” — Priyanka Chopra, actor.

“It (being financially independent) gives you a different kind of freedom. Today, I am not dependent on my parents, nor do I need to depend on a man from a financial point of view. And, it is a nice feeling,” — Deepika Padukone, actor.

"Money is only a tool. It will take you wherever you wish, but it will not replace you as the driver," — Ayn Rand, novelist and philosopher.

“A woman’s best protection is a little money of her own,” — Clare Booth Luce, American author and US ambassador.

“When money flows into the hands of women, who have the authority to use it, everything changes — for women, their families, and their communities,” — Melinda Gates, philanthropist.

“I truly believe that liberty for a woman comes from the ability to make financial decisions for her life. This is not a high-tech solution. This is a low-tech solution for a low-tech problem that has a high impact,” — Reema Bint Bandar Al Saud, Saudi Arabian ambassador to the US.

“Economic equity is enormous empowerment of women. Having jobs that provide income means that women can be a more effective force, a more equal force, in the political process. Women with income take themselves more seriously and they are taken more seriously,” – Betty Friedan, feminist writer and activist.

“Give a woman a dollar, and she can put it to good use. Teach her about how money really works, and she can change the world,” — Linda Davis Taylor, CEO and Chairman of Clifford Swan Investment Counselors.

Leadership is about the way we connect with each other, says Sukanya Padmanabhan of Swiss Re GBS India

This woman entrepreneur’s startup handles everyday problems of the elderly