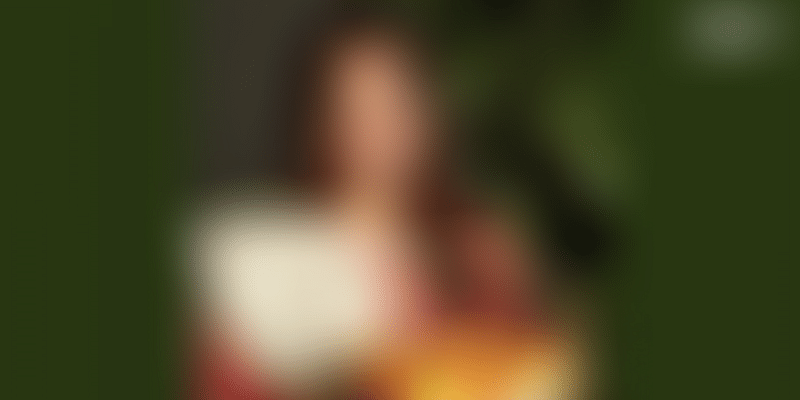 Sheetal’s Baked With Love, a Mumbai-based venture offering unique cupcake bouquets is finding ‘flavour’ with the who’s who of Mumbai including Nita Ambani and Shilpa Shetty.

After their wedding in 2000, Sheetal Dedhia and her husband, Dipen Dedhia moved to their farm in Karjat, 60 kms away from the hustle and bustle of Mumbai.

There, the couple started cultivating roses and once they got deeper into it, they even pursued hi-tech farming specific and special to Holland. This helped build a successful business of exporting roses and the couple soon became the first Indian growers to supply to supermarket retail chains like TESCO for its market in London and Dubai, among others.

A fashion designer by education, Sheetal started making candles in her spare time which evolved into a successful venture she labelled, Big Fat Cat. Giving birth to a son and ensuring his needs were met brought Sheetal back to Mumbai.

“My candle making business took a  backseat because my son needed more of my time. I always had a passion for creating stuff and felt the need to continue engaging in creative activities,” Sheetal tells HerStory.

This also marked the beginning of her latest home-based venture, Sheetal’s Baked With Love, launched in 2016. Donning the baker’s hat only in her late 30s, Sheetal has still managed to get her business up and running, and that too successfully. She has served the who’s who of Mumbai including renowned philanthropist Nita Ambani and fitness icon Shilpa Shetty, among others. "You name the top-notch personalities, and they are all among my clientele,” she says.

Sheetal works with a team of five to offer a wide range of eggless cakes and brownies, all priced between Rs 500 and Rs 5,000. Her passion for roses and flowers shone through in her creation of her bestseller - cupcake bouquets.

However, finding the right packaging for the edible bouquets was a challenge. She says the existing options would ruin designs with the icing floating about by the time it reached the customer’s doorstep. “It took me six months to get the right person that ensured the cakes reached the customer's doorstep as designed,” she adds.

The entrepreneur says word-of-mouth has played a huge role in the venture’s growth so far. While Sheetal says she could have used some smart social media tactics for marketing earlier in the journey, her Instagram account - where most of the business happens - is full with user-generated content.

When the baking enterprise remained shut briefly in the wake of the COVID-19 outbreak and the subsequent lockdowns, Sheetal was pushed into resuming service by her clients. “They called and insisted I start baking again. I haven't seen a bad day since then,” she quips.

The designer's instinct in her makes sure that the presentation is perfect, offered in any colour requested. To be precise, the desserts are made Instagrammable and hence, has been able to attract several brand collaborations with the likes of The Face Shop India and Jack & Jones.

Having served more than 4,000 orders so far, Sheetal is a trendsetter in the industry, with several bakers picking up her idea of delivering cupcake bouquets. Sheetal does not identify any single entity as a competitor but the market has seen the mushrooming of many players, especially during the pandemic. In 2020, the Indian bakery market reached a value of nearly $ 7.60 billion and is expected to become a $12.39 billion industry by 2026.

Started with Rs 50,000 dedicated to packaging cost and an OTG oven, Sheetal has made a total investment of Rs 10 lakh over the years. The venture is clocking an annual revenue of Rs 30 to Rs 40 lakh.

The entrepreneur decided not to shift the venture to a studio yet because her son is in Class X , and attending online classes. “I have decided to work from home to support him," she says.

At the same time, Sheetal refuses to believe that motherhood has come in the way of entrepreneurship. “If anything, my husband and son have only pushed me harder and encouraged me to keep going. When I feel like I should pay more attention to my son's education and not take more orders at times, he tells me to look after myself and the business and not to worry about him,” she says.

For Sheetal, the road ahead is clear: “to be creative-led to remain different yet be relevant in the market.”

Who are the three women entrepreneurs Ivanka Trump mentioned at GES 2017?