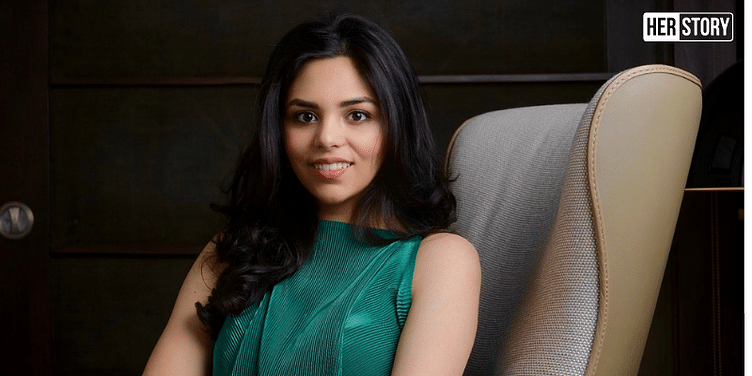 Gurugram-based Heyday is a homegrown sustainable brand that offers feminine hygiene products and baby diapers. The founder, Deepanjali Kanoria, was recognised as a Forbes 30 Under 30 in India and Asia.

About 121 million out of 336 women and adolescent girls of reproductive age in India have access to sanitary napkins, according to the National Family Health Survey 2015-2016.

The Water Supply and Sanitation Collaborative Council states that a woman uses an average of eight sanitary napkins per menstrual cycle, generating a waste of one million pads monthly, and 12 million annually in India. This causes an environmental hazard as pads made of plastic take anywhere between 500 to 800 years to decompose.

“The products are completely biodegradable within two years of disposal. For women and children, they offer a safer, softer, and healthier way of experiencing hygiene that is good for the body and the planet.”

Born and brought up in New Delhi, Deepanjali studied at Carmel Convent School and went on to Barnard College of Columbia University in New York where she majored in psychology and economics, both all-women’s institutes.

In 2014, she entered the corporate world, working as a financial analyst at Ernst & Young in Manhattan where she gained leadership skills and financial know-how.

She says, “While I loved my job, a huge part of me felt incomplete as I could not see any tangible difference I was making. I felt I was under-utilising my potential. I used to binge on TED talks and a little over a year into my job, I came across a lot of content regarding the need for upliftment, education, innovation, and development in India.”

That is when she noted the sorry state of  menstrual hygiene in India. Many women had access to period products like sanitary napkins, tampons, and menstrual cups, but a majority of them were unaware of the harmful effects of the plastic content.

In September 2015, she quit her job to build Heyday, which was launched officially in October 2017. A year later, being recognised as a Forbes 30 Under 30 Asia and India helped gain more visibility.

With 24 SKUs at the moment, the price for feminine hygiene products starts at Rs 99 while baby diapers are available from Rs 299. Present in over 300 retail chains online and offline, the products are available on ecommerce platforms like Amazon, Flipkart, and Nykaa, besides its own website.

The startup ensures its commitment to being an end-to-end sustainable brand, and uses degradable packaging to serve a loyal customer base of about four lakh people.

Diagnosed with PCOD, this woman entrepreneur quit the aerospace sector and started a range of natural food mixes

Deepanjali says starting has been challenging due to two reasons: the social taboo surrounding menstruation and market monopoly.

“Initially, most retail stores wanted to stock mainstream commercial brands and were reluctant to accept new brands. Thus, we had to establish our distribution network very carefully to penetrate the Indian market,” she explains.

Often, stakeholders would not take her seriously merely because they expect to do business with men. The stigma in openly talking about menstrual health only made it harder but the entrepreneur says she has been able to shape the narrative in the past three and half years.

Bootstrapped so far, the startup broke even in one-and-a-half years and saw 3X YoY growth.

The competition in the market has also grown with peers like Nua Woman, PeeSafe, and Azah, among others.

Deepanjali believes the multitude of brands only serves as a proof of concept to show an unmet demand for innovative personal care in India. Valued at $550 million in 2020, the sanitary napkin market in India is expected to be at 12.2 percent annually till 2026.

Heyday claims to conduct extensive research for each product and make it affordable to set the brand apart. It also engages actively on social media through influencers to raise awareness. Moving ahead, the founder hopes to introduce a new product every six months “and expand internationally as well”.