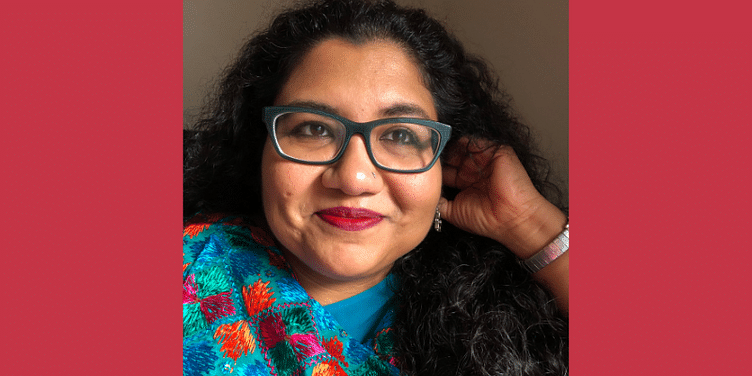 In her book ‘Women Who Misbehave,’ author Sayantani Dasgupta showcases the different shades of a woman – unconventional, reckless, imaginative and contradictory.

Here’s a book that celebrates women – with all their frailties, insecurities, (mis)adventures, longing and recklessness.

Women Who Misbehave by Sayantani Dasgupta, published by Penguin India, is a collection of stories that showcases the different shades of women, replete with unconventionality and what the world would call, “imperfection”.

It is in these imperfections that these women shine – whether it’s an aunt who comes to terms with an impulsive mistake made ages ago, a young woman spilling a dangerous secret at her friend’s wedding anniversary party, or how a group of girls mourn the loss of a mysterious neighbour.

Sayantani’s writing is imaginative and funny, and at the same time, in a subtle way, provokes thoughts and makes you come up with conclusions.

In a conversation with HerStory, the author talks about the concept of the book, women who misbehave, and the mélange of stories that make it stand out.

HerStory: How did you come up with the concept of Women Who Misbehave?

Sayantani Dasgputa: I didn’t start off by thinking of a collection centered around misbehaving women per se. But because I am drawn to interesting, unconventional women, I think they just kept appearing, demanding to be written. After I had written three or so stories, it seemed like tying them all together would make for an interesting collection.

HS: It's said, 'Well-behaved women rarely make history'. Do you believe in this?

SD: Well-behaved or not, woman or not, each of our lives is made up of stories. That you missed the bus on your way to work and had an argument with Bittu at the traffic light is a story. That Batra stores didn’t have your favorite mango pickle on a Sunday evening is also a story. How you tell it is where the art lies. Each of these stories happen to us or to those we know, in the backdrop of larger events, however you define “large,” whether that be traffic jams, or riots, or the melting of polar ice caps. Each of us lives through historic moments every day, and ends up with thousands of stories. Now who gets to tell stories, whose stories are valued and heard is another matter altogether.

I think more people are reading and writing because of me, says India’s best-selling author Chetan Bhagat

HS: Are your characters inspired by real life, in any way?

SD: Sometimes. Not necessarily, my life though.

HS: The book offers a mélange of stories, of women characters - do you believe women have many layers?

SD: My first impulse is to say, we all have many layers, not just women. But that’s not true because pretty much everywhere in the world I have lived, men have occupied space in ways far different and freely than women. A few years ago, when I was visiting my family in Delhi, an American friend also happened to be in town. On our way back from checking out the sights, he remarked, “I love this — this energy and frantic pace! But why so few women?” His question shocked me. It was the middle of the day. What did he mean there were no women? It dawned on me that having lived most of my life in Delhi, I stopped noticing the proportion of men versus women on the streets on any given day. His “outsider” gaze made me acutely aware of it.

But I will also say that having now lived in the US for almost fifteen years, I know that my female friends there too consider a variety of factors before stepping out or staying out, and the stakes are often higher if you belong to any kind of minority.

I would say that everyone has layers but since women have had to live inside their minds and in interior worlds far more than men, their layers are often buried beneath the surface and therefore they are much more fun and challenging to explore.

HS: Women also have their frailties - that makes them human, even when the expectations from them are sometimes beyond human.

SD: The answer lies in the question itself. Women are human, so they have the same range of every possible emotion, be it pride, wrath, desire, love or hatred. Whether they are able to show it authentically is a different matter.

HS: many of your stories, your women are also unapologetic, confident of their choices...what were your thoughts while fleshing out such characters?

SD: Once the characters arrived in my head, they did all the work. I only made sure I was asking them a lot of questions, such as, what do you want and what’s preventing you from getting it?

SD: I didn’t. I sent the completed book to my agent back in March 2019, a full year before the pandemic. Of course, it took a few months to shop the book around, then sign the contract, etc.

Overall, from the time I wrote the first story to the time I wrote the last, it took me thirteen years. During that time, two of my other books got published, along with many essays and short stories in magazines and journals, I switched jobs, got married, etc. I think my own life had to be as jam-packed as it was in order to give these stories the meat they deserved.

I’m not sure if there’s ever a perfect time to launch a book. So many factors influence the success of any creative product. As an artist, you can only do your part. The rest is up to the universe. But yes, if it weren’t for the pandemic, I would have been in India to celebrate the launch with my family.

HS: Can you tell us a little about yourself and when you first started writing?

SD: Professionally, I have worn several hats. I have worked as an editor in various publishing houses, I have been a member of marketing and communications teams at software companies, and I have been a content writer for educational sites. These days, however, I am a professor of creative writing. In all the different roles I have assumed, the two things that have remained consistent are my love for reading and my desire to have books in the world with my name on them. That I actually get paid to teach people how to write stories is the greatest gift I have given to my six-year-old self, which is the age at which I decided I wanted to write books.