100 Emerging Women Leaders: The story of Radhika Iyer Talati, an entrepreneur and a two-time cancer survivor 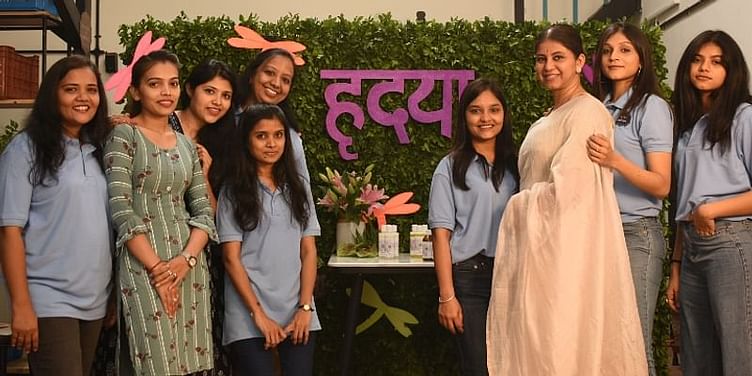 When Radhika Iyer Talati was diagnosed with cancer for the second time, she realised her life needed a 180-degree turnaround. After spending several months in the Himalayas, Radhika is now the founder of a yoga foundation and an organic brand called Anahata in Vadodara.

Close to 12 years ago, Radhika Iyer Talati was diagnosed with breast cancer. However, it wasn’t her first bout with cancer. In the early 2000s, she was diagnosed with uterine cancer, for which she had to go through the ordeal of vigorous cancer treatment.

“This time around, it was breast cancer and I knew there was a fundamental need for a change. I had already given birth to a child, and I simply loved my body. And the idea of taking it under the knife wasn’t something I was keen about,” Radhika tells HerStory.

It was then that she was introduced to the idea of alternative medicine and therapy – specifically, Ayurveda, naturopathy and yoga – by a family friend. After consulting with a naturopathy doctor, she decided to move her base to the Himalayas and undergo a complete lifestyle change. The naturopath had helped her with a skin infection.

For the love of mountains

The stint in the Himalayas was pivotal to Radhika, and there was no looking back. It helped her recover and even now found startups like Anahata and a foundation in Vadodara, Gujarat.

“Having said that, I am not prescribing to the fact that yoga and Ayurveda are magic pills for everything. It all depends on the stage of the disease, what the doctors recommend, and several other factors. I was lucky that the cancer was detected in the early stages and I could take this route. If it was in a little more advanced stage, I wouldn’t have been able to completely make the shift and would have had to take my regular treatment,” says Radhika.

For Radhika, what was surprising was that she had always considered herself fit, with her regime including exercise and diet. “My tryst with cancer helped me realise that there was more to it. The body, mind, and soul – all needed to be nourished. Spending several months in the mountains helped me focus on building my inner core, and pranas” says Radhika.

During the course of her treatment, she started feeling a sense of affinity towards nature, clean and healthy eating, and yoga. It was also during this time that she completely fell in love with mountaineering.

She is one of the very few women to have completed the “Panch Kailash Mountains” trek in the Himalayas. She scaled Mt Kilimanjaro along with her three children, as well as traversed the Ladakh-Manali route on a Royal Enfield bike.

“The mountains seemed to be calling to me. I felt a special affinity, and knew I had no choice but to go. If my health kept deteriorating, I simply couldn’t do much for my family,” says Radhika.

The need for natural products

After spending several months in the mountains, Radhika came back home to Vadodara to found a yoga foundation in 2010. She says her idea is to spread the knowledge. During this time, she was also thinking of starting an organic care brand ﻿Anahata Organic﻿. Then, the pandemic hit in 2020.

“The COVID-19 pandemic strengthened my resolve to start Anahata. I saw the dearth of real, genuine organic products in the market that are true to our culture, environment, and body type (genetics). A lot of these things are not reflected in most Indian brands. That pushed me to start on a large scale and establish Anahata as a corporate brand,” Radhika says.

The startup’s manufacturing process supports small farmers, women entrepreneurs, and local businesses. While the product formulations are curated in the Himalayas, its DIY recipes are handed down from one generation to the next in handwritten books and manuscripts.

Although Anahata began manufacturing the products like organic food, staples, as well as skincare and beauty products in September 2020, it is still exploring new ways to grow.

“We have consciously decided to adopt plastic-free packaging, and instead use glass, tin, and recycled materials, even though that amounts to slightly higher costs. As a company, we also decided to hire people and not mechanise our processes too much,” says Radhika.

At present, the startup has a team of 24 people. The production team is made up of about 70 percent local women who come from low-income families from the nearby villages around Vadodara and across Gujarat. During the pandemic, the team was also buying in bulk from organic farmers to ensure that they have a source of livelihood.

“We still have a long way to go. But we, as a brand, believe in empowering more women as well as in building communities that help other women and children to enhance their lifestyles. Our team has people from different age groups,” says Radhika.

A mother of three, Radhika says that women automatically learn how to multi-task and are hardwired and trained to look at everyone else. “Look after yourself as well. We don’t realise how important that is until we hit a roadblock ourselves,” she says.

Advising women entrepreneurs, she says, “Avoid doubting yourself. Everything will fall in place once you start doing things. Just take the plunge and get things going.”