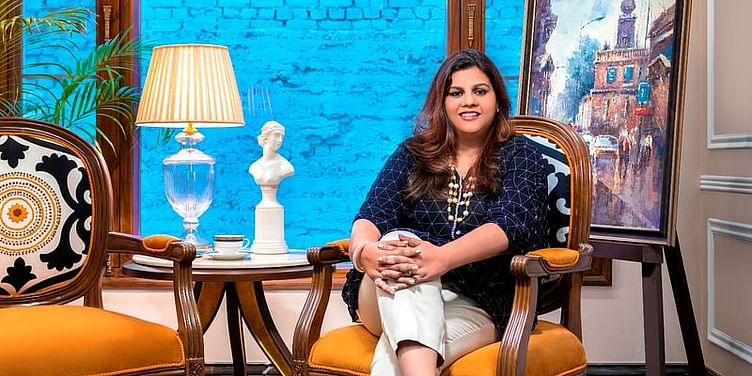 Pooja Gupta is the Founder of Amiraah, a multi-designer store in Kanpur that features creations of some of the biggest designers in the country. She is also the Founder of I-Design Studio and the Vice-Chairperson for FICCI FLO – Kanpur chapter.

In 1999, Pooja Gupta had just finished her MCom studies from Kanpur University, and came back home to Kanpur for a break. But unfortunately, little did she realise that a tragedy would change her life forever. She lost her father suddenly to a cardiac arrest.

“It’s an understatement to say that my world had completely changed. I was suddenly not just the breadwinner in the family but was also trying to keep us emotionally together. I took up small jobs in schools, did drafting work, as well as tuitions here and there – all the while desiring to be an interior designer.

I didn’t have the luxury back then to take on an internship and gain experience like the others, but life is a great teacher and the lessons I’ve learned have shaped not just my personality but even the way I approach things,” Pooja tells HerStory.

She worked as an English teacher in a school in Kanpur, and apprenticed with a leading architect in the city for three years, while also launching her own practice with I-Design Studios in 2000, and later, Amiraah in 2016.

Amiraah, a multi-designer store in Kanpur that features creations of some of the biggest designers in the country like Tarun Tahiliani, AM:PM, Amprapali, Namrata Joshipura, Anushree Reddy, Kavita Bhartiya, Joy Mitra, and more.

And I-Design Studios, an interior design firm that is also credited for building beautiful homes, some of which have been featured in the top 25 list across publications. Pooja is currently the Vice-Chairperson for FICCI FLO – Kanpur chapter, along with being a single mother.

What helped Pooja was the early experience she gained from working different jobs. At the start of her career, Pooja received several opportunities to work in the adjoining areas of the city like Lucknow, Gorakhpur, Bareilly, and Banda.

“Anyone hailing from a small town will tell you that the people’s lives and businesses are all interconnected. So, if one client takes notice of you, they’ll share your contact with their circle and that’s how you end up acquiring new clients, purely through word-of-mouth,” says Pooja.

The love of art

Pooja also kept herself updated by working on different projects and understanding the different and emerging practices in the fashion industry. She attributes her creative sensibilities to her childhood that was spent growing up across several cities in north India.

“This exposed me to the traditions, sights and sounds of India’s diverse cities and cultures—colourful bazaars, peaceful shrines, breathtaking art and craft forms, beautiful embroideries and textiles and complex architecture,” says Pooja.

Pooja explains that all of her products are made as per the specifications of the design composed and curated in tandem with the client’s demands. Post this, the team sources raw materials to actualise the client’s vision.

“So simple things like the kind of detailing, patterns, and metalwork are looked into. Whether it’s a piece of furniture, artwork, or a ceiling transformation, research into the design is key,” says Pooja.

However, the journey hasn’t been an easy one. Pooja says society makes single women feel validated only in association with a man or with a child.

“So yes, these biases do creep in and sometimes, they get the better of you and it’s difficult to shake it off. It was difficult for me to navigate my professional life without the support of my family. Despite these tumultuous times, I had a dead set goal on being a successful interior designer and that’s why on my gloomy days, my passion is like a rainbow that cuts through the stormy skies of self-doubt,” adds Pooja.

Though COVID-19 has pushed back some of the plans that were in the pipeline, but there’s no stopping Pooja. She says she is looking to expand retail stores of House of Amiraah in the near future, and focus on interiors as an extension.

“In addition to that, I am also looking at online as an interesting medium that will help me reach out to a larger audience, both locally and nationally. For example, a person sitting in Canada should be able to have access to designers that are not only household names, but also upcoming and distinct,” says Pooja.

She adds that with I-Design, she also wants to work on restoration projects.

Advising all women entrepreneurs, Pooja says, “Be positive and passionate about your craft. There are no dead ends when you’re driven and motivated to succeed. You’ll always carve out the road to success. The only secret formula is to just go for it, think of nothing else, and take the risk because without it there is no gain.”