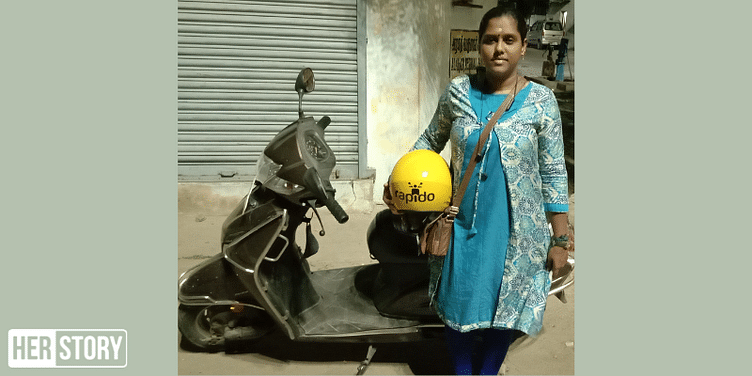 Every work has its own dignity, says Chennai-based Ambica who became a Rapido captain and delivers food across the city.

The pandemic has thrown up innumerable challenges to the human race. Apart from infections and deaths, it has displaced families, shut down businesses, and left a large number of people without any source of income.

Thirty-four-year-old Ambica was no exception. Her family had roots in the film industry – while her father was a tabla player for famous music directors in Kerala like Johnson Master, her brother is a keyboard player. Ambica too followed in their footsteps.

Born and raised in Chennai, Ambica used to do the background scores for films, sing at stage events, and also has her own orchestra. In between, she also sang at hotels like the Ramada. With the onset of the pandemic, her 14-year musical career came to a grinding halt. Her husband had passed away following an illness two years ago, and she was looking at ways to supplement the family income.

“I was living with my children, mother, and brother and thought there’s no way I am going to sit at home, doing nothing,” she says.

Every job is ‘good enough’

She joined the local corporation office and worked as a supervisor for four months, helping COVID-19 infected people, before joining a bike-taxi service. But when this too came to a stop, she turned to Rapido.

“I have seen my brother using Rapido’s services to go to places. I thought I could apply for a job as Rapido Captain. I filled in the form and spoke to them, and was offered a job immediately,” Ambica says.

During the pandemic, Rapido has tied with ecommerce platforms for pick up and drop of essentials and also food delivery. Ambica now delivers food daily between 6 pm and 10 pm zipping through Chennai city on her Honda Activa, often travelling long distances.

While the work is good, she says, the “frustrating part is sometimes having to wait for more than an hour at restaurants to pick up food”. She does around six deliveries every day.

“This is a difficult time, and I cannot be choosy about jobs. Even with a BCom degree, I am offered only around Rs 6,000-7,000 when I apply to companies. This work at least gives me a steady income – around Rs 250 a day,” she adds.

Besides taking tablets to boost her immunity as advised by a doctor, she continues to take all Covid precautions – wearing a mask, gloves, and using the sanitiser liberally before and after each delivery.

She says people have been very kind and usually tip her for most orders. Also, riding through the city is a breeze now with almost no traffic due to the lockdown.

Ambica emphasises each work has its own dignity. Though her brother was somewhat upset about her choice of work in the beginning, he now supports her decision.

“The pandemic has cost the livelihoods of many. I am not going to let go of a job that helps my family,” she says.

Her future, she says, revolves around her two daughters, now eight and six years. She plans to sell their family house in Kerala and buy one in Chennai. Ambica wants to save enough money to secure a good future for children.

In the meanwhile, she cautions that the best way to combat this pandemic is to take all precautions and not take this virus lightly even when things start getting back to normal.

She advises everyone to wear double masks, maintain social distance, sanitise their hands, remain indoors and let delivery people do the fieldwork.