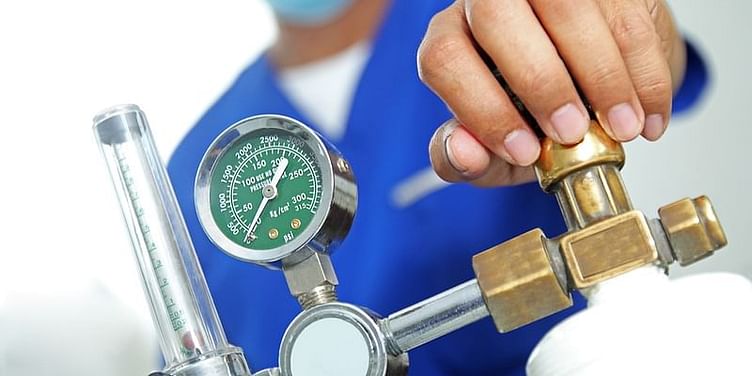 An Oxygen Express train piloted by an all-female crew arrived in the city with 120 metric tonnes of medical oxygen from Jamshedpur.

"The 7th Oxygen Express to Karnataka has arrived in Bengaluru from Tatanagar (Jamshedpur) on Friday. This Oxygen Express train piloted by an all-female crew will ensure continued supply of oxygen for COVID-19 patients in the State," Railway Minister Piyush Goyal tweeted on Saturday.

The 7th #OxygenExpress to Karnataka has arrived in Bengaluru from Tatanagar.

This Oxygen Express train piloted by an all female crew will ensure continued supply of Oxygen for COVID-19 patients in the State. pic.twitter.com/UFWgKwVyuZ

The state government has sought 1,200 metric tonnes of oxygen daily in view of rising COVID cases in the state.

Karnataka has reported 32,218 COVID-19 infections and 353 related deaths on Friday taking the total infections and fatalities to 23.67 lakh and 24,207 respectively.

On Friday, the state received the sixth Oxygen Express from Kanalus in Jamnagar in Gujarat carrying 72.94 metric tonnes of Liquid Medical Oxygen (LMO) in four cryogenic containers for COVID patients in the state.

According to the Chief Public Relation Officer of South Western Railway Aneesh Hegde, the Oxygen Express reached ICD Whitefield in Bengaluru in the morning.

"A signal free ''Green Corridor'' was created by the Railways to enable swift transport of this Oxygen Express, i. e. this train has run stoppage free, and has not had to wait for crossing/passage of another train," Hegde said.

According to him, the train carried 72.94 tonnes of LMO in four Cryogenic containers.

So far, Karnataka has received 712.94 Tonnes of Liquid Medical Oxygen by Rail, said the officer adding, Indian Railways has so far run 208 Oxygen expresses and transported nearly 13,319 tonnes of LMO in 814 tankers to various places in the country to assist state governments in their fight against COVID-19.

Karnataka has demanded that the Centre should provide at least 1,200 tonnes of oxygen daily in view of the growing COVID cases in the state.