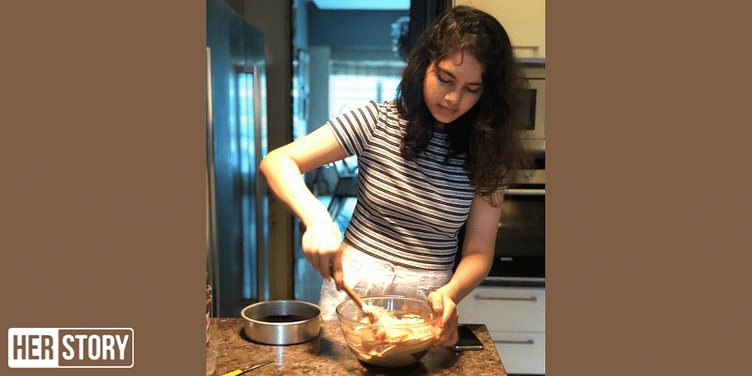 Elisha Parikh, aka elithebaker, is a 15-year-old self-taught baker from Mumbai who uses the proceeds of her thriving business to contribute to various charitable causes.

Elisha Parikh started baking at the age of seven. Now, at 15, she is known as elithebaker and has a thriving Instagram page, a website of her own, orders pouring in, and celebrity mentions on social media.

The young girl is also an entrepreneur twice over. Apart from her Eli the Baker persona, she has also teamed up with a classmate at Dhirubhai Ambani International School to launch Cakeify, a startup that sells DIY cake kits.

However, her story is all about being elithebaker and the noble thought behind her venture.

Speaking to HerStory, Elisha comes across as a girl with her own “business” mind. She handles everything herself and is articulate about what she is doing and what she wants to do. There is no hesitancy or doubts; she has chalked a clear path for herself and that is evident throughout the conversation.

“My interest in baking came from my family, with my parents and grandparents being avid foodies. My father has a food blog as well,” she says.

Inspired by a book

Inspired by Start to Cook, a cookbook for children, Elisha baked her first batch of cookies at the age of seven.

“We didn’t really have much baking equipment at that time, because it was for the first time someone in the family was trying to bake a dessert. They turned out to be pretty good and more than the result, I enjoyed the process – measuring and mixing. So that’s where it all really started from,” she says.

Being very young at that time, she got a little help from her mother on handling the gas oven. She was soon able to do it herself. With the support of her parents and constructive criticism, Elisha was soon inspired to bake other desserts.

In 2017, encouraged by the response she received from friends and family, she decided to have an Instagram page of her own, titled @elithebaker, and the whole venture went commercial. She soon began getting orders from people from Mumbai on her page.

“Initially, I never had any intention of taking orders. Once I started receiving an overwhelming amount of interest, I decided to give it a try. Soon, I was flooded with others. In the beginning, it was stressful, but over the years, I have learned to manage it,” she says.

Elisha admits that she has to handle quite a bit of pressure and stress juggling baking and school.

“It can get a bit tough. On weekdays, it can get a bit overwhelming as I might get four to five orders in a day. That’s why I do not take any orders during exams. But I do bake for myself to cope with the stress. Over the years, I have learnt to be organised. But if someone makes an urgent order, sometimes I may decline because it gets a little too much,” she says.

From being an intrepid baker, Elisha has grown into a seasoned one, practising new techniques over time. She now makes classic desserts as well, including cheesecakes and French pastry.

“I love a good challenge, and if someone asks if I can make a special dessert for them, I am always up for it and give it my best shot. I can now bake quite a spectrum of desserts,” she adds.

Elisha sources the ingredients and keeps the accounts herself, seeking help from her parents whenever she needs it. She says she uses only premium ingredients, including Belgian cocoa and chocolate and charges anything from Rs 2,000 upwards for a cake. Her cookies are priced between Rs 125 and Rs 150 apiece.

A number of celebrities are her clients. Deepika Padukone mentioned her on Instagram, but Elisha prefers to keep a celebrity clientele a secret.

Baking for a cause

Interestingly, Elisha donates the entire proceeds of her sales to causes. She explains the story behind this.

“Since I was a child, I have always been passionate about helping people who don’t have the same opportunities as me. As a child, I used to support PETA. Now, during the pandemic, I hold regular bake sales and use the money to buy masks and essentials for hospitals that have a shortage of them. Some of the revenue goes towards helping underprivileged families. My most recent initiative was baking 150 cupcakes for KEM Hospital in Mumbai. I try to pitch in wherever I can,” Elisha says.

She is also part of HelpOut, an organisation that strives to improve the lives of children living in Ladiwali, Karjat.

Her other business Cakeify is also doing well “because a lot of people now have the time to bake their own cakes”.

According to Elisha, the business has increased during the pandemic due to two reasons. A lot of people are now at home and since schooling is now online, she gets the time to experiment on new creations.

“There’s a new trend of little lunchbox cakes. I have received a number of enquiries and orders for these. The pandemic has boosted my sales and also helped me evolve as a baker,” Elisha says.