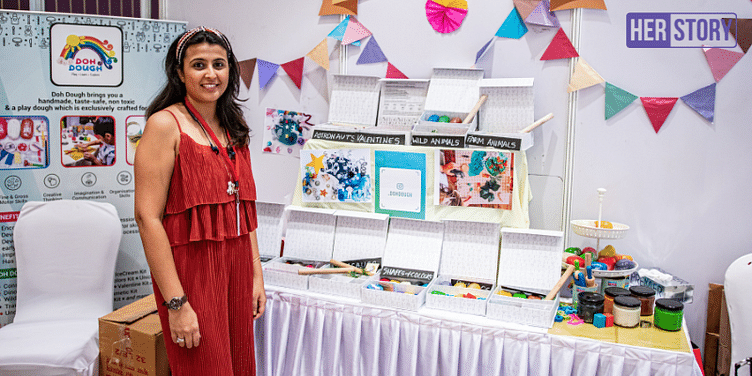 Entrepreneurship is no child’s play - but for some, like young mother Deepti Bhandari, who spent many hours playing with her toddler son, a business idea took shape during play time. Teaching her young son colours and shapes led Deepti to think about safe and non-toxic play materials, which made her launch an organic playdough business, Dohdough, in June 2019. In the same year, she started an activity centre in Bengaluru for children up to 10 years, which operated till March 2020 when the coronavirus-induced lockdowns were imposed.

The first time Deepti brought home playdough, she was amazed at how calming it felt to play with it. The process of rolling and moulding clay into shapes is known to help little ones develop fine motoring skills, spark creativity, and improve hand-eye coordination as well.

However, when she stumbled across an article raising concerns regarding the safety of commercially produced playdoughs by bigger brands, Deepti began experimenting and making playdough from her home kitchen.

“An American journal stated that most playdoughs contain many chemicals like Borax, Sodium Phosphate and Kerosene that are not healthy for children,” she says.

By referring to online recipes and after many trials, she made a few organically coloured and scented playdoughs for use as well as distribution among friends and family. The product was so popular that a friend urged her to sell commercially. Deepti took the advice seriously, and started to sell the playdough through Instagram, Facebook and three different pop-up stores in Bangalore. She also used it at her activity centre.

Surprised by how many other parents agreed with the product, Deepti began experimenting more. “People are looking for something organic and chemical-free, not readily available store-bought products with longer shelf life,” she says.

She adds that Dohdough’s products stand out due to its softer texture and healthier ingredients. She firmly believes mass manufactured products harden over time despite showing longer shelf life.

Priced between Rs 225 and Rs 2000, Dohdough’s products are made in small batches only once an order is placed. Deepti receives orders from her social media channels, other online marketplaces, as well as Dohdough’s own website.

The children’s toy market in India was valued at $1.23 billion in 2020, and between 2021 and 2026, the market is expected to grow at a CAGR of 12.2 percent, according to the IMARC Group. Some of the key competitors in the market are Funskool, Faber Castell, and Play Doh.

Deepti was not entirely new to entrepreneurship. Hailing from a business family, she had worked with her father for about a year and a half in their family’s iron and steel business, where she learned the administrative side of running a company.

However, with Dohdough, Deepti had no set plans and its organic growth left her rather unprepared. She says, “I was quite clueless, and only found out later that those other entrepreneurs draw time-specific goals and chart out different areas to focus on through women entrepreneurship platforms.”

Additionally, as Dohdough maintains a strict shelf life of six months and ensures eco-friendly practices, entering the highly promising retail market is also a challenge. “For entering retail, plastic packaging would be cheaper and easily available too, but we want to stick to cardboard boxes to promote eco-conscious packaging,” she adds.

Deepti has also added other tools in the product range like wooden rolling pins, play dough cutting knives, and wooden stamps. Asked if she plans to diversify into other toys, the mumpreneur says, for now, she is happy to just focus on creating safe and non-toxic playdough experiences.