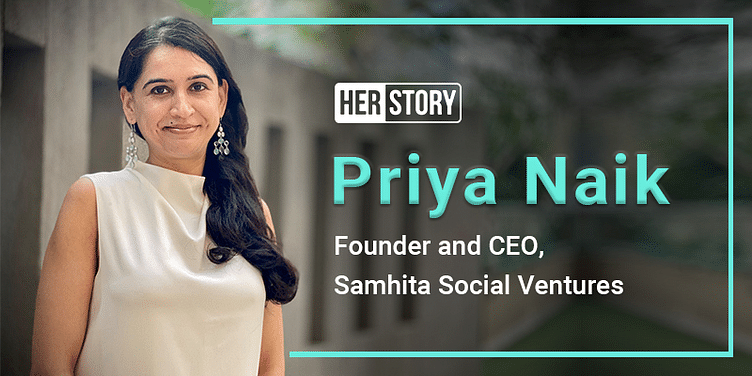 Understanding privilege and using it for social impact is the hallmark of a good social entrepreneur.

By the time Priya Naik, founder of Samhita Social Ventures, had turned 25, she had visited 25 countries, including Cuba, Bangladesh, Ghana, and Nigeria – typically unknown countries for their tourism.

“I was raised in the Middle East, where the concept of seeing poverty in motion does not exist and is not part of your lives. This was something of a shock when I came to India for the first time. These two combined, plus the need to make a difference and to address it responsibly, was ingrained in me,” she says.

The third was the privilege of an excellent education – three master’s degrees - in Economics from Yale University, Public Policy from the University of Michigan, and Commerce from Mumbai University. Priya also holds an Executive Education degree from Harvard Business School. She is also on the advisory board of Vision Catalyst Fund and, in the past, engaged often with CECP, ANDE, FICCI, and Unstereotype Alliance.

Priya says she stumbled into entrepreneurship while studying at J-Pal, Massachusetts Institute of Technology (MIT) in Cambridge. “At MIT, I was part of two student-led startups – Aerovax, a company that created safe, inhalable aerosol vaccines that could be delivered without the use of needles, and Kalpataru, a company that delivered innovative, low-cost technology to increase the efficiency of microfinance institutions,” she says.

Priya believes there are usually two responses for social work. “You see something happening, and you can either take up the responsibility to fix it, or you can give in to despair and believe there’s no way around it. It is difficult to pick the former.”

Of the pain point behind Mumbai-based Samhita Social Ventures, Priya says, “NGOs in India do incredible work to solve several problems right at the grassroots level. But unfortunately, they do not have the resources to scale this into an initiative for a bigger community."

"We saw the private sector's potential and the work they were doing, and the question of using the same methods to solve all the problems in society was raised. India has a very robust nonprofit ecosystem. There’s NGO’s, the government, philanthropists and the idea is to bring all of them together.”

Samhita calls itself a full-scale “alliance builder” that works with corporates to align their CSR efforts and social initiatives with the needs of the social sector. This is done in partnership with various stakeholders who come with in-depth knowledge and first-hand experience of dealing with social issues — this ensures a long-term and outcome-oriented approach to problem-solving.

“We decided to create instruments tailored to meet different people’s needs instead of assuming a one-size-fits-all approach. With millions losing their jobs and livelihoods due to the pandemic, we are at the forefront of livelihood revival and healthcare response with two multi-stakeholder alliances — REVIVE and India Protectors Alliance (IPA),” she explains.

How this social entrepreneur has been rescuing children during the pandemic

The creation of multi-stakeholder alliances - India Protectors Alliance and REVIVE Samhita has positively impacted many lives.

REVIVE, supported by USAID, MSDF, Omidyar Network India, British High Commission, New Delhi, and UNDP, is a blended finance facility leveraging corporate and philanthropic funding to provide accessible and affordable capital in the form of returnable grants to 1,00,000 informal workers and at-risk nano and micro enterprises, with a focus on women and youth.

The India Protectors Alliance, an initiative by Samhita, Hindustan Unilever, RBL Bank, and BMGF, has engaged companies and foundations in COVID-19 response and relief for over 5,00,000 protectors - healthcare practitioners and sanitation workers, and communities.

“Samhita started with interns/ young people from IIT and BITs. They were all brilliant engineers who were 20-21 years old, on their way to the Stanford’s and Mackenzie’s of the world. And this was something they were doing as a first step into the real world where they were trying to make a difference without really making this their line of work or career choice,” she says.

Samhita’s clients are companies in the private sector on regional, national, and global levels from the likes of Hindustan Unilever, Cipla, IDFC Bank, Godrej, and a lot more.

“We provide end-to-end services, including program and implementation design, research support, impact assessment, and program management, which effectively drive social change with the support of philanthropic and CSR funds. We provide customised solutions for companies and foundations for social empowerment. We also help organisations transition from compliance-driven CSR to catalytic CSR strategies, thus helping them not just participate, but also meaningfully engage in the process of building social solutions,” she adds.

When Priya’s first started Samhita’s business model, it was to leverage technology to bring together stakeholders. Around that time, the government brought forth the CSR mandate, and it had both a positive side and limitations.

“The positive angle was that all companies now compulsorily had to invest in CSR and solve problems that were not about stock, and sales, and marketing. It instilled an inherent sense of purpose, and I heard someone say that when one walked into the boardroom, we talked about the company and the society and the citizens of the country and the things we could do for them. It got some of India’s prominent leaders to think about more than just their company and focus on being citizens of this country as a matter of routine,” she says.

It was initially funded by NSL in the first five years when it was pivotal to understand the dos and don’ts as a social enterprise. It is funded through various grants from USAID, UNDP, etc. A combination of upfront seed investments and consulting fees has helped Samhita build on alliances and large-scale projects, sustaining it as an NGO.

“Samhita’s biggest success is the ability to design projects that could be scaled, and its focus on delivering solutions to people. Since our inception, we have evolved into a full scale “alliance builder” that works with corporates to align their CSR efforts and social initiatives with the needs of the social sector,” Priya says.

In the future, Priya wants to build as much integration with various unicorns and companies as possible.

“As a collective, we want to resolve issues like getting people vaccinated quickly and women resuming work to start with. By playing off each other’s strengths through collaborative efforts, bigger problems can be addressed,” she adds.