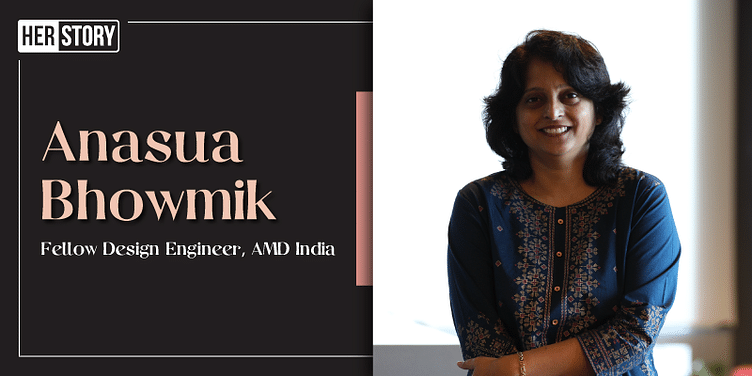 As AMD India’s first woman Fellow Design Engineer, Anasua Bhowmik leads the CPU performance modelling and microarchitecture team. She speaks to HerStory about her career, and why more women should be encouraged to join the tech workforce.

Anasua Bhowmik is the first woman engineer to become a Fellow, one of the high ranking designations in the engineering stream at AMD India. In a stint spanning 15 years, Anasua has built her expertise in areas such as microprocessor design, performance analysis, simulation, and compiler design.

Prior to AMD, Anasua worked as a research scientist at the Indian Institute of Science (IISC), Bangalore.

After Class 12, when Anasua decided to study engineering at Jadavpur University, she was completely unaware of computer science.

“However, my father, who was an engineer, encouraged me to take up a career in the field. He said it was a fast-evolving technology and going to play an important role in the future,” she says.

While studying computer engineering, she was fascinated by computer systems and hardware design more than the software part of it, as it allowed her to understand how computers functioned at a fundamental level.

After her undergraduate degree, Anasua decided to specialise in computer systems and architecture and pursued a master’s in Engineering in computer science from the Indian Institute of Science in Bangalore and then went to the University of Maryland at College Park, for a PhD.

In a conversation with HerStory, Anasua speaks about her journey in tech, her role at AMD and her biggest successes, and challenges.

HerStory (HS): Tell us about your work at AMD India.

In addition, I work closely with business teams and help them to showcase the performance edge of AMD CPUs through benchmark performance, address queries and observations from customers. As a Fellow, I also work with senior architects at AMD to plan IPs that will set the stage for next-generation AMD technologies.

HS: What have been your biggest successes?

AB: I was part of the design team that developed AMD’s highly successful Ryzen CPUs. It was a brand-new CPU design that delivered more than 50 percent performance over our previous generation CPU. It helped re-establish AMD in the high-performance CPU market. In 2019, we launched the second-generation Ryzen CPUs based on Zen 2 core, which became the most successful lineup of processors for the company. I was the lead for the CPU performance for Zen 2 core. Being able to successfully deliver this project in partnership with my local and global teams has been one of the biggest highlights of my career.

It is very satisfying to see CPUs that I have worked on being used everywhere from large data centres, supercomputers to personal laptops. During the pandemic, our technology has become indispensable in education, business activities and maintaining communication.

HS: What have been some of the challenges in your journey?

AB: When I joined AMD, we had limited talent availability in the very complex area of high-performance CPU microarchitecture. To bring high-quality work to AMD’s India Development Centre (IDC), I focused on building deep expertise in the x86 processor architecture and high-performance computing, both at the personal level and at the team level. We hired fresh talent and mentored them closely to build a very strong team.

The team began small, but we delivered on time and with high quality. Soon, we started getting more ownership for complex tasks and responsibilities. Over the last 16 years, my team has navigated different challenges that came with the ground-up development of the Zen microarchitecture. I have built the largest CPU modelling team at AMD and we play an important role in defining the performance and microarchitecture of all AMD microprocessors. I lead an extremely talented and motivated team of engineers who have developed deep expertise in processor architecture. Currently, there are 16 engineers in my team, and more than half of them are women.

HS: What more can be done to attract women engineers to the semiconductor industry and more importantly retain them in the workforce?

AB: I believe, young engineers lack women role models in the semiconductor industry. It is the responsibility of senior women leaders to connect with them at the university level and educate them about the opportunities in this industry. A great way to inspire other women engineers would be to showcase one's own contributions to the innovations and candidly share how we overcame the personal and professional challenges. Hosting technical workshops, providing internship opportunities and regular industry-academia interactions are great ways to attract women engineers to the semiconductor industry.

To retain women in the industry, offer good career growth prospects and family friendly policies so that they can balance their career and care-giving responsibilities at home. Regular mentorship sessions will also play an important role.

HS: Do you mentor women in tech?

I also maintain a strong academic connection through my role in AMD’s University Relations programme. I have given guest lectures on AMD technologies at IITs, IISC and at various conferences. I have shared my experiences in this industry with women engineering students on multiple occasions and organised Women in Engineering sessions in VLSID conferences.

[Women in Tech] Talent above gender should be the mantra for every organisation, says Rachel Ler of Commvault

HS: Why is networking essential for women in tech?

AB: Often, women tend to focus on their immediate work environment, without trying to get exposed to more ideas and opportunities. They also hesitate to share their ideas and opinions with others or seek support when needed. Networking helps overcome these hesitations, meet like-minded people, learn from their experiences, exchange ideas, and find support. It also opens new opportunities and possibilities for career advancement.

HS: Why do you think there are very few women in leadership positions in tech?

AB: Technology is a relatively new career path for women. Traditionally, women have preferred to join fields like medicine, law, or teaching. It takes many years of hard work and perseverance to rise to a leadership position in any field. So, you find fewer women leaders today in this sector. We also find that many women drop out in the middle because they find it hard to balance work and family life.

Having said that, times are changing. I am very optimistic about the future. Today, there are some prominent women leaders in the technology space who are beacons for those who would follow.

HS: Why should every organisation have an equal opportunity mindset?

AB: Equal opportunity mindset should be a default in any organisation. There should not be any question about it. Diversity at the workplace broadens everyone’s outlook and creates a healthy and friendly work environment. It fosters greater mutual respect which is essential for successful collaboration and innovation.

HS: Who have been your biggest inspirations?

AB: While growing up, my parents were my biggest source of encouragement. They always showed confidence in me and motivated me to pursue my career and my dreams. I was also fortunate to have great women teachers throughout my school and college, whom I admired a lot.

In addition, AMD CEO Dr Lisa Su has been a huge inspiration. Similarly, Jaya Jagadish, our Country Head, has also been instrumental in the growth of the AMD design centre in India. It has been a great learning experience working alongside her. I also get to work and interact with many highly talented senior technical leaders at AMD. They inspire me each day.

HS: What do you like to do in your spare time?

AB: I love travelling, and especially off the beaten tracks. I have visited places like Tibet, the Sahara Desert, the rain forests of the Amazon, the Arctic, and have hiked in the Himalayas. I love going to forests and seeing wild animals in their natural habitats. A few years back I hiked in the rain forests of Uganda and tracked mountain gorillas and chimpanzees there. One of my hobbies is also cooking. I love cooking for my family and friends. Being a quintessential Bengali, I spend a lot of time in virtual “addas” these days with my family and friends - discussing world affairs and arguing about everything under the sun.