Bihari cuisine? Meet the saas-bahu who started up amid the pandemic and are getting over 450 orders every month 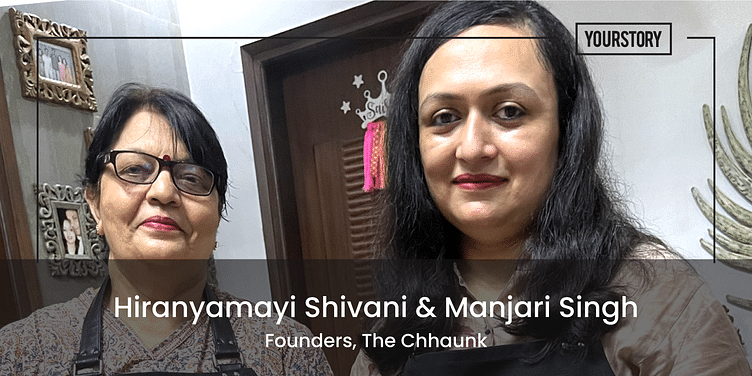 The Chhaunk, started by mother-in-law and daughter-in-law duo Hiranyamayi Shivani and Manjari Singh, is a cloud kitchen that serves authentic Bihari cuisine in the Delhi-NCR region.

Chhaunk, also known as tadka, taalipu, vaghaar, or poron, in different Indian languages, adds the extra zing to most Indian dishes. Usually, a tempering of mustard seeds, cumin, or hing (asafoetida) in sizzling hot oil is poured over food – carrying a wafting aroma and a taste that symbolises home.

Manjari is already an entrepreneur with her ecommerce cooking and kitchen serveware brand, Favola. Hiranyamayi, who has a master’s in history, was a homemaker until July 2021, when the pandemic disrupted her plans of returning home, to Bihar. She decided to start a business with her daughter-in-law instead.

“My mother-in-law is a fabulous cook – she has that maa ka haath ka jaadu (magic in mother’s hands) that everyone keeps talking about. Since childhood, both of us have been exposed to diverse cuisines, which also helped us develop an interest in food and learning more,” Manjari says.

Food that tastes of home

When the second wave of COVID-19 hit India, and Hiranyamayi was unable to leave Delhi, the duo thought there must be people, especially from Bihar, looking for authentic Bihari food. Manjari says they dived deep into a new business without a second thought.

“As we are a specialised Bihar cloud kitchen, people from Bihar automatically became our initial target customers - especially those living away from their families.”

In just a couple of months, the opposite has happened. While retaining loyal Bihari customers, their promotions now target people fond of exploring new cuisines. To this end, they keep adding more Bihari items to the menu and are also attempting a fusion of cuisines.

The duo started with Litti Chokha, a signature Bihari dish that is basically stuffed whole wheat dough balls served with a brinjal or potato curry.

“The first person who ordered was our family friend, a non-Bihari living far from his family in Delhi. He once ate food prepared by my mother-in-law, and soon after he got to know about our venture, he placed an order with us. He now orders food regularly,” Manjari says.

The Chhaunk offers a variety of dishes from its cloud kitchen, including snacks like Bajka, Jhalmuri, Chura Matar, Chura Badam, and more. They have Sattu ki Kachori, Litti Chokha, Pulav, and Dal Puri with kheer for full meals. They also offer Sattu Sharbat, a quintessential Bihari drink.

They use glass packaging to deliver lead-free, safe-freeze, leak-proof food.

​​How this woman entrepreneur went from starting a Facebook group to building a marketplace for plant-based, vegan snacks

In less than two months, with an initial investment of Rs 50,000, The Chhaunk has registered a 40 percent growth and delivers up to 450 orders in a month. Prices start from Rs 180.

Manjari is philosophical about the whole idea and venture.

“Amid every crisis lies opportunity. The pandemic brought so much havoc but did not stop us from dreaming. We had constant doubts after seeing the conditions of other food businesses but thought to give The Chhaunk a chance in our way.”

The duo works from their home and office in Gurugram and has a team of 13. They use social media extensively, especially WhatsApp and Facebook. They have partnered with Zomato and Dunzo, and are launching their website soon.

While the saas-bahu complement each other in their love for food, they also have unique working styles. Hiranyamayi looks after the recipes and cooking process while Manjari manages the vendors and finances. “It’s a great family and business partnership,” Manjari says.

The duo also has ambitious plans for The Chhaunk.

“From the chowks of Bihar, The Chhaunk aims to create an ecosystem that has a home feel. We aim to open at least 50+ outlets in the next two to three years to deliver Bihari homemade food. In the next year, the company plans to open outlets in Delhi-NCR, Mumbai, Pune, Goa, Bangalore, and Jaipur,” Manjari says.