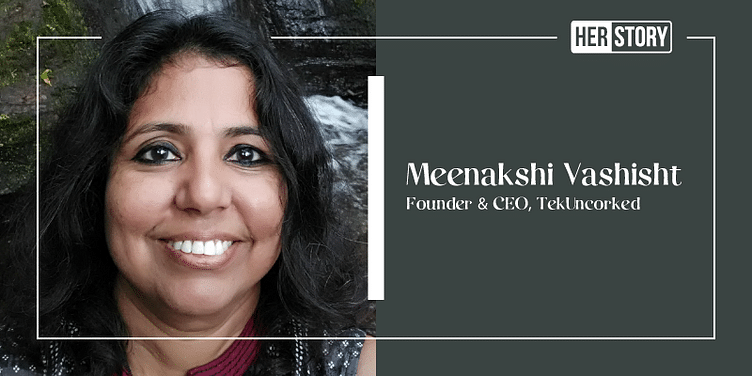 After leaving a cushy corporate job, Meenakshi Vashisht hit the reset button to start up. She founded TekUncorked that builds, deploys, and manages an enterprise-ready AI-IoT platform to monitor and track assets in real-time to detect wastage, leakage, malfunction, and pilferage.

She shares stories of how the forest and the small piece of land they tilled sustained their family. She recalls, “While enjoying chai hospitality in a lone home in the middle of a jungle, I saw the lady of the house carrying a big load of dried sticks that she had collected from the forest floor. The small solar panel that the government had donated could not bring electricity to her home but kept them connected to the world as they could operate a small transistor radio using it.”

The trek made her reflect on life and ponder about a person cut off from the grassroots realities of the country. The thought kept on nagging Meenakshi, and she finally decided to pull the reset button.

“I wanted to solve an endemic issue in the country using technology. And that served as a trigger to start my entrepreneurial journey,” she says.

A sports enthusiast, archaeologist, and passionate techie, Meenakshi spent nearly 23 years architecting and driving globally relevant product innovation programmes at ISRO, C-DoT, Temic, Motorola, and NXP, before deciding to step off the corporate path to start a life of an entrepreneur.

In 2010, she left her job at Freescale Semiconductors (earlier Motorola SPS and now NXP), and for the next year travelled across 20,000 km rural, suburban, and urban India, meeting people from academia and various grass root enterprises.

“A couple of my childhood friends joined me, and we started TU Technology, an edtech company which conducted innovation boot camps to teach young engineering students about conceptualising products and making them commercialisation ready. There were some good product successes, and long term paid skilling partnerships with about 10 universities. Our simple yet intelligent product lines solved day to day issues for our consumers. There was a case study about us in Ivy League. We were making money, were profitable, and creating good impact,” she explains.

However, Meenakshi was itching to solve a more significant pain point. But all was not well in the founding team – one of her co-founders was faced with an excruciating divorce while another was going through some challenging family issues. They were unable to walk any further.

For the next few years, she operated as a single founder, along with a small team engaged in researching, experimenting, and pivoting.

Along the way, she met her current co-founders – Ram Sethi and Rohit Monga. Meenakshi knows Ram from her Motorola days, where he led the Enterprise Software team. They met again in 2016 when he was in the process of moving out of Microsoft to set up his venture. She met Rohit through her family network. He has 20 years of experience in driving domestic and international accounts.

In 2018, they found their product-market fit with Electricity Utilities - converging all their efforts in solving losses in last-mile electricity distribution. A large amount of electricity generated did not reach the end consumers.

In 2019, was incorporated with its LVIoT platform to check the health of grid infrastructure in real-time 24X7.

With our platform, any conditions on or around the grid that can pose a risk or threat to electricity distribution to intended consumers are detected and alerted. LVIoT leads to an up to 8 percent reduction in distribution grid losses, thereby reducing the power sector’s carbon footprint. Further loss reductions are expected as the platform penetration in the distribution grid infrastructure goes up.”

TekUncorked’s clients comprise electricity distribution utilities in India, Southeast Asia, Eastern Europe, and the US. Some of its early customers include FabHotels, Kota Smart City, DAPP, NTPC, and others.

On competition, she says, “We reduce distribution grid losses, and our revenue is a function of savings generated for the utilities. There is a lot of focus on building efficiencies in Electricity Distribution Grids, and there are companies like Power Easy who are working in this space besides the giants like Siemens, Schneider, and L&T. UK-based GridKey (part of Lucy Electric now) is also working to solve the problem of grid losses in the UK.”

TekUncorked’s strategy is to let customers experience technology through few pilot deployments in the field, experience immediate savings, and benchmark losses through a subscription model followed by sharing of savings for the rest of the inventory.

﻿TekUncorked﻿ has been funded ($150K) through a promoter, friends, family, and customer revenues during the bulk part of its R&D and market exploration phase.

Besides, it also received equity free assistance of $50,000 from Microsoft and Workspace Credits from Qualcomm.

“We engaged with one utility in November 2018, got agreement for pilot in April 2019, deployed our first pilot in June 2019 in Delhi NCR and the second pilot in January 2021 (nearly 18 months were lost in COVID), first commercial trial order in March 2021, and agreement for pilot from 3 utilities in August and September 2021. Our biggest challenges have been getting entry into utilities as an outsider, COVID, and keeping afloat through the long sales cycle this sector has,” she adds.

TekUncorked is part of Qualcomm’s QWEIN cohort for 2021. “Masterclasses during incubator/accelerator programmes like Empower, ACT4Green, QWEIN helped in getting me up on the entrepreneurial learning curve as well as building the right networks. Access to resources from Qualcomm and Microsoft helped us develop, mature, and refine our technology,” she says.

Her aim is for the startup to acquire a 30 percent market share in India and about 10 percent Internationally and chase a $10 billion revenue target in the next 5-8 years.