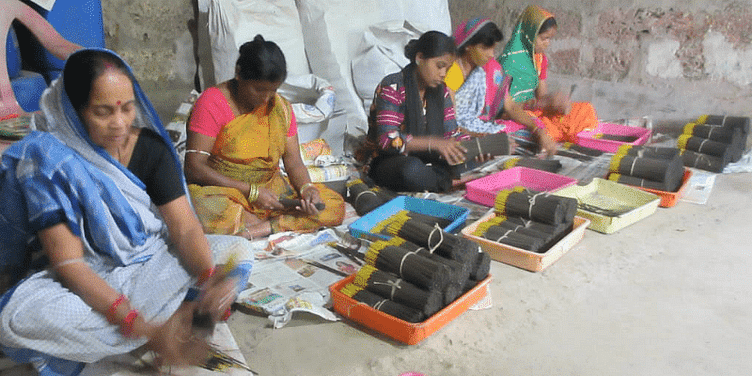 For more than five decades, the All India Agarbathi Manufacturing Association has been ensuring the employment of unskilled women across rural India. Today, it has over 300,000 women in its value and supply chain.

In Sathanur village, Mysuru, 30-year-old Shruti Mahadev is making ends meet for her family of six by making raw agarbathis.

“Earlier, I used to supply it to local traders but constantly faced payment delays. That is when I enquired about vendor requirements in the nearby cities and showed them my samples, and became a vendor,” she tells HerStory.

Shruti starts her day at five in the morning and takes care of her household work, including tending to her husband who is a stroke patient, their two children, and a differently-abled sister-in-law, with the help and support of her mother-in-law.

By 8 am, she is ready to begin work at a unit attached close to her house.

After her husband’s stroke that restricted his mobility a few years ago, Shruti took the opportunity in agarbathi-making to fend for the family without having to move cities for work.

During the lockdown, when workers could not come to work, the agarbathi company they supplied to, provided raw materials with which Shruti managed production with the help of her husband.

Shruti is one of the 300,000 women who are either supplying to manufacturers as micro-entrepreneurs or have joined the workforce of manufacturing companies in the network of All India Agarbathi Manufacturing Association (AIAMA).

According to IMARC Group, the incense sticks (agarbathi and dhoop) market in India is expected to grow at a CAGR of 10.1 percent from 2021 to 2026. Over the years, export demand has also increased and touched a revenue of Rs 965 crore in FY18 from exports alone.

Designing functional pockets: Why this Kerala-based entrepreneur and feminist is bullish on customising women’s apparel

The All India Agarbathi Manufacturing Association was established in 1949 as a platform for redressal of grievances of agarbathi manufacturers. Today, women from rural areas make up 80 percent of the manufacturers under the association.

Arjun Ranga, who took over as the President of AIAMA last year, says that the agarbathi industry may not be a glamorous one but is surely consistent as far as women’s employment is concerned.

Manufacturers and the association identify areas with little farming activity, team up with local NGOs and communities to identify and train uneducated and unskilled women into making the product.

“The best part is there are no prerequisite skills. We provide training and if we train 1,000 women, about 100 work with manufacturers. They are then given sufficient materials and support whenever needed to upskill themselves,” he explains a procedure that has been in play for decades now.

While it has been confined to Karnataka and Tamil Nadu until the 1990s, it has now gradually expanded across the country.

However, the industry is largely dependent on the availability of natural raw materials and woods, especially during the pandemic. Failing to ensure consistent raw materials would adversely affect its growth and employment avenues.

Arjun says the industry employing women for decades results in structural change. “Most women are working from home for about three to five hours alongside the household chores. Regardless of what the husband earns from hard labour for the family, this income provides financial freedom to the women,” he adds.

The association claims to help several thousands of women from marginalised communities by raising funds for the education of their children. The manufacturers contribute to funding the higher studies and college education of these children as part of its CSR activities.

Some of its member companies include Cycle Pure Agarbathies, Vijay Agarbatti, and Thakral Perfumes, among others.