Meet the woman whose organisation works for the upliftment of nomadic, denotified tribes in Maharashtra 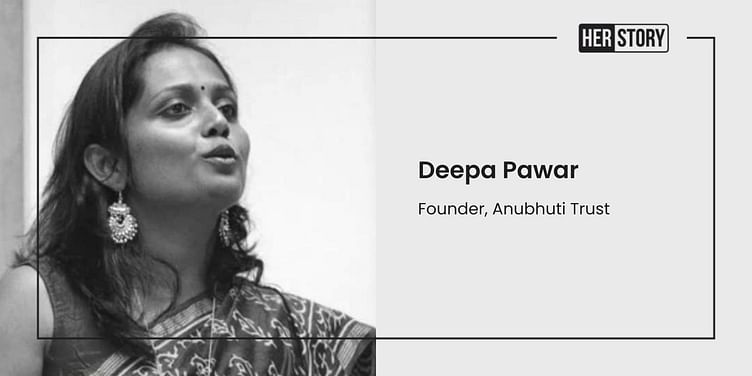 The only woman-led Nomadic and De-notified Tribe (NT-DNT) organisation in India, Anubhuti Trust, is founded by Deepa Pawar. In this conversation with HerStory, Deepa talks about intersectionality in caste and tribes and how her identity is beyond that of a Bahujan woman.

Deepa Pawar founded Anubhuti Charitable Trust in 2015 when she realised that she wanted to work for the upliftment of Nomadic and Denotified Tribes within the marginalised section.

Hailing from the Lohar tribe of Rajasthan, Deepa’s family and a few other families migrated to Maharashtra in the late 80s. Her tribe still faces several social barriers due to lack of education, income security and awareness.

While most in her tribe are not able to secure basic education, Deepa’s sheer determination to be educated and her interest in studying pushed her to work at the age of 14. Two decades of work in the social sector, fellowships, and degrees later, she has won several awards, including the recent Martha Farrell Award for the Most Promising Individual category.

“We didn’t have any awareness around education. My father studied till class four or five and my mother could barely read out of her own initiative. I completed seventh standard in a government school somehow. But there was no school after class seven in our locality. One had to go to a semi-private school for further education and spending Rs 700-800 for a girl’s education was a challenge for my community in the late 90s,” Deepa tells HerStory.

To continue her education, Deepa had to work several menial jobs so she could pay for the tuition fees.

“This is the time I found an NGO which was looking for a girl my age to teach young children and women living in city slums. I joined them and this is how my journey into intellectual literacy began,” she says.

Finding her calling with Anubhuti Trust

Anubhuti means to experience, and to empathise and not just sympathise, says Deepa about the trust’s name which comes from Buddhist philosophy. It works for the progress of the youth in tribal and migrant communities in the various parts of Mumbai’s suburbs and slum areas.

I realised that my identity was far more marginalised being a Bahujan woman. It comes from the fact that I come from a migrant nomadic tribe. Many communities suffer from poverty, but my tribe hasn’t seen eradication of poverty for generations. There are no resources or awareness to fight against social evils like gender violence or injustice

Deepa, who is based out of Badlapur in Thane district in Maharashtra, shares what moved her to start Anubhuti Trust despite having a successful career in the social sector, “In 2010-11, after working in the social sector for a decade, I realised that my identity was far more marginalised being a Bahujan woman. It comes from the fact that I come from a migrant nomadic tribe. Many communities suffer from poverty, but my tribe hasn’t seen eradication of poverty for generations. There are no resources or awareness to fight against social evils like gender violence or injustice,” she says.

According to Deepa, she realised that despite her work in the social sector, she was unable to reach out to her own community.

“It took me a few years to understand my calling and when I was unable to push it further, I quit my job at the NGO I was working at then and got my organization registered,” she adds.

Some of the areas, Deepa works in include mental justice — an intersection with social security and justice — gender empowerment, leadership training, sexual and reproductive health rights, and safe higher education among others.

Deepa is also the Grand Prize winner in UC Berkeley’s Tell Her Story contest 2018 and was a finalist in the CII Foundation’s Women Exemplar Award 2018.