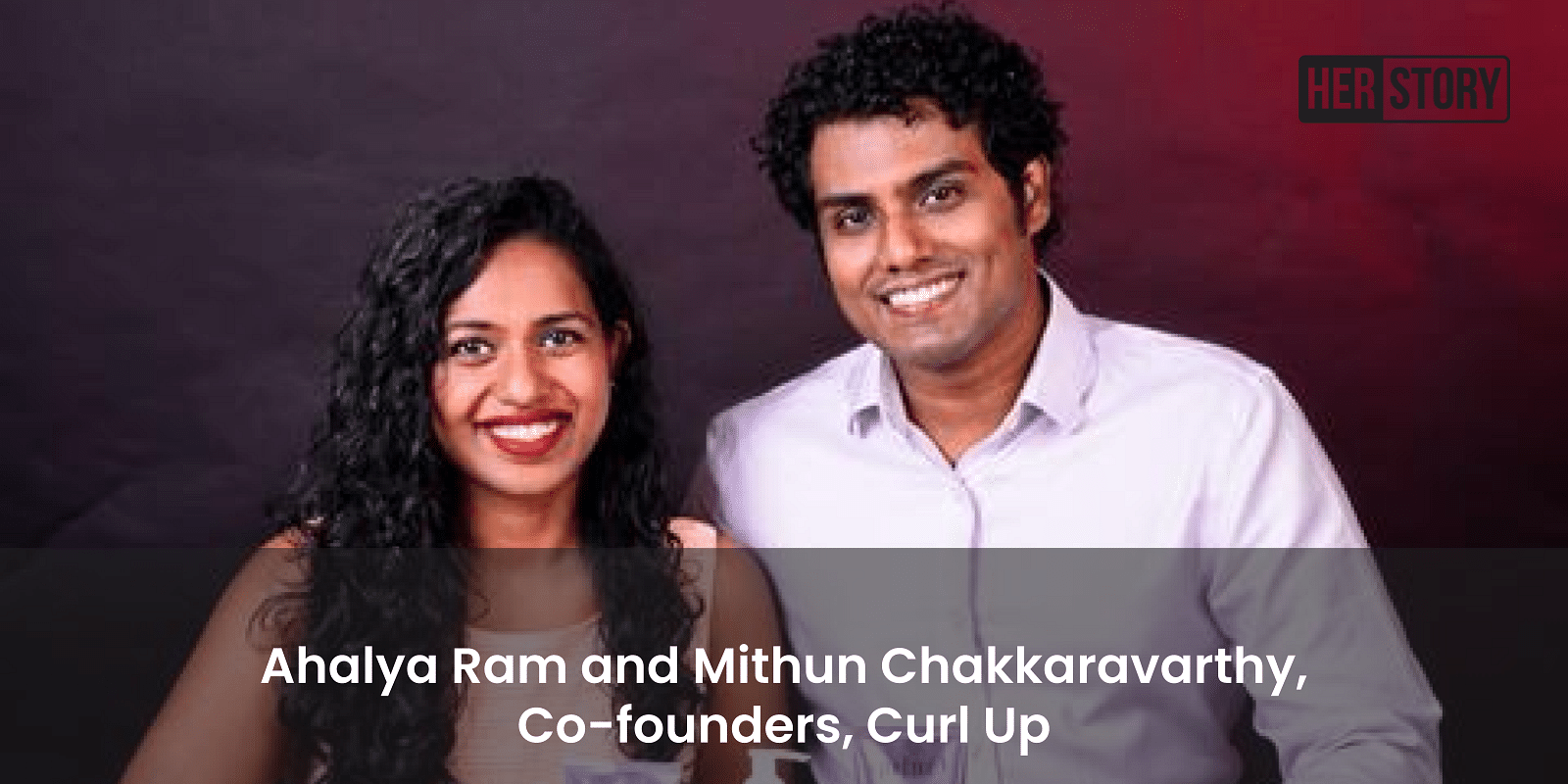 Ahalya Ram and Mithun Chakkaravarthy quit stable jobs in the US to launch Curl Up, a haircare brand for curly and textured hair. The D2C brand has received a lot of love on social media, and aims to help people across India embrace their curls.

Have curls, want straight hair! After all, the grass is always greener on the other side.

So it was for Ahalya Ram, who like many others with curls, dealt with her hair by fighting its natural texture. As soon as she got a job in the US, she invested in a straightener and used it religiously every day for three years. Getting ready for the day included an hour-long process of straightening her curly hair.

However, the damage showed when she gave birth to her daughter and could not keep up with straightening her hair daily. “I was really short on time and started to see the damage it was doing to my hair,” she said.

Feeling frustrated, Ahalya began looking for other products for curly hair and stumbled upon the Curly Girl (CG) method that African-American people in the US had innovated. The CG method involves discovering one’s curl type and hair characteristics, and trading damaging habits such as heat styling for a healthy hair regimen by avoiding harmful chemicals and shampoo.

Using the products available there made a world of difference to both Ahalya and her husband, Mithun Chakkaravarthy, who discovered that he had curly hair only at 27.

“He used to have very dry hair and maintain a buzz cut. He just used shampoo, but that is the opposite of what should be done. People with curls should use more conditioner and less shampoo. As he also started using the products and grew his hair a bit, we saw the natural texture of his hair,” she tells HerStory.

Their experience led to the realisation that even though many Indians have curly and textured hair, there were no specific products catering to the Indian ethnicity.

A handful of the population who knew how to take care of curly hair often relied on international products not made for the Indian climate or hair texture.

Noting this market gap and opportunity that struck a persona chord, the couple decided to quit their jobs in the US and returned to India for good in 2018.

The duo spent time on research, attended many conferences, and spoke to formulators and professionals in the cosmetic industry before flying to India. They then started the ground work from Bengaluru, developed an in-house formulation for Indian hair, and officially launched Curl Up in 2019.

﻿Lets Curl Up﻿ entered the market with a basic bundle kit of three products (shampoo, conditioner, and curl-defining cream) – all CG method-friendly.

The idea behind offering a basic set of products was to keep it simple as the consumers are already overwhelmed and unaware due to the presence of many products in the market. Now working with a team of 20 people, the haircare startup has a total of six different products priced between Rs 595 and Rs 750.

The couple is committed to keeping the products accessible, and they are sold through their website and ecommerce platforms like Nykaa, Flipkart, and Amazon.

Curl Up’s social media presence has helped it stay connected to the customer base, and hear their needs and wants publicly and via direct messages. This helps them with the pipeline of products they innovate.

The brand is now working on its next set of products, which was delayed due to the pandemic-induced lockdown and logistics difficulties. Ahalya says a lot of the initial efforts and painstaking processes have “gone out of the window”.

The entrepreneur declined to share initial investments and other finances as Curl Up is “a fledgling company at the moment”.

The brand’s USP is its focus - helping people embrace their curly and textured hair. They share the market space with haircare and cosmetic brands that offer a wide range of products, including those for curly hairs as well.

Ahalya says their number one challenge  is creating awareness among potential customers.

“As a country, we are very unaware of how curly hair should be taken care of. In fact, the most common question we received was if our products would make straight hair curly. We had to inform that this product was meant for naturally curly hair.”

Curl Up amplifies its motto “embracing yourself” by leveraging its social media presence. Instagram has been a blessing for the young brand as many users, including influencers, have shared their unfiltered experience without the need for paid collaborations.

For now, the end goal is to reach as many customers as possible and help them understand their natural hair texture.

“That would be our success metric because India is such a diverse country. I don't think we have even touched the tip of the iceberg yet. There are so many people out there who are still not aware of caring for their hair; they damage it with so many chemical treatments,” she adds.

In the long run, Curl Up aims to be the one-stop shop for curly-haired people.

Ahalya advises aspiring and budding entrepreneurs “not to take criticisms to heart, drown out the background noise, believe in yourself, and work for it”.

After all, their belief in a product that would solve a unique Indian problem got them through the times when their family and friends thought they were crazy to abandon a well-settled life in the US to take an entrepreneurial risk.

Beyond laboratory glassware: how Priyanka Kheruka wants Borosil to be an everyday-use brand