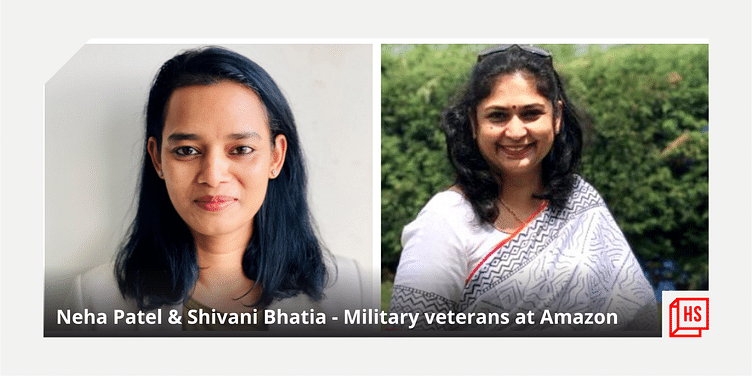 On Republic Day, meet Neha Patel and Shivani Bhatia, veterans who are leading operational and corporate roles at Amazon India after successful stints in the Army.

In 2019, Amazon launched the Military Veterans Employment programme to offer opportunities to military veterans and their spouses.

The company partnered with the Office of the Director General of Resettlement (DGR) and the Army Welfare Placement Organisation (AWPO) to ensure continued work opportunities for military families in the country. Through this programme, Amazon India has created hundreds of job opportunities for military veterans enabling them to establish fulfilling alternate careers after serving in the armed forces.

This Republic Day, HerStory speaks to two women from the Army, who are now successfully forging new careers in Amazon. They bring with them invaluable experiences and unique skills with a focus on serving people, be it at the border or at Amazon.

Hailing from a background of educationists and medical specialists, Neha Patel was the first in her family to join the Army. Inspired and intrigued by the pictures of women in Army uniforms in her school library, Neha decision to join the Army when she became an adult.

In her 12-year stint with the Army, she held appointments across the country including Dras, ground zero in the Kargil district in Ladakh.

She says of the experience, “The most memorable one was at Dras, where I was appointed as the first Woman Staff Officer and Advisor to the Brigade Commander. I was responsible for managing logistics of the area, including transport, ordinance stores, and casualty evacuations. I, along with the team, achieved ‘Battle Casualty Status’ for the area – an honour that provided benefits to the next of kin to any casualty in the area for serving in the inhospitable, uncongenial terrain and succumbing to death with or without Hot War situation.”

Her memorable experiences of the stint include moving a unit from the northern to north east sector in six months of service as advance party commander.

“I also published a paper on process change automation in the Ordnance Journal and achieved the Best Automated Depot Award for my unit. I managed the vertical for pan-India procurement at two major mother depots and was responsible for indigenising the non-commercial/non available items,” she says.

In 2019, Neha quit Army life to explore new avenues in the corporate world, which brought her to Amazon India.

As procurement manager, she looks after the procurement vertical for Capex Procurement dealing with safety and support facility items. She is also responsible for the procurement for sustainability equipment such as solar panels to reduce consumption and increase green energy utilisation.

“I believe military training has equipped me to perform and execute my role better and parallelly, enabled structured transition into the role. We carry out a complete dissection of pain points and address them with processes and solutions to ensure that operations run smoothly.

"While I believe that military training equipped me to perform and execute the role better, Amazon Warriors (the dedicated group for Military Veterans), my team, and managers made the transition seamless for me. I am also a part of Diversity, Equity & Inclusion, and Sustainability groups, which helps me contribute to the overall inclusive culture narrative,” she explains.

Neha wants to work together with teams to amplify customer experience by, innovating, and bringing structured and sustainable processes.

“It was a certain change from Army life, but I am evolving, learning, and changing my work sphere processes day by day. Carpe Diem,” she says.

A second-generation Army officer, Captain Shivani Bhatia’s father retired as a Colonel in the Army from the Regiment of Artillery. She grew up in various cantonments across the country and studied in army schools and kendriya vidyalayas.

As a child, Shivani loved nothing more than seeing her father in uniform.

“That’s the only way of life I understood - disciplined, patriotic, and nomadic. It made me who I am today. I always wanted to follow in my dad’s footsteps and adorn the olive green and so I decided to join the Army in 1998,” she says.

She joined the Army Ordnance Corps in September 1998.

She explains, “An ordnance officer is responsible for providing material and logistics support to the Indian Army. My job was to ensure that weapons, systems, vehicles, and equipment in my charge were ready and available in perfect condition at all times.”

She recollects an incident that happened in a small village called Banar near Jodhpur.

“During Operation Parakram (2001-2002), I was posted to Rajasthan as a young Captain. We established our camp in the middle of a desert near Banar. Soon, word spread that there was a lady in uniform among the men. The villagers used to get their families - women and children - to see me from a distance. I started interacting with the kids. After a year, when I was leaving, the Sarpanch of the village asked me, ‘What do I have to do to get my girls this uniform?’. I politely told him to let them study. I hope some lady officer someday tells me she belongs to Banar!”

After completing a short service commission of five years, Shivani left the Army when she was expecting her first child.

Having worked across multiple industries in a variety of roles, she approached Amazon India Operations in 2015, and joined the company’s last-mile operations. Today, after six+ years, she is the Program Lead for the Easy Ship team in IN Marketplace.

“The Indian Army prepares its officers, men and women, with skill sets that prove to be invaluable in the corporate world. The teamwork, comradery, leadership, logical thinking, problem-solving approach, and self-discipline are a few traits that I imbibed during my time with the Army. These are very similar to the Leadership Principles that Amazon operates on, so I found myself in familiar territory,” she says.

Her day involves strategising, setting goals, meetings with stakeholders/partners, guiding the team, and unblocking them on their deliverables.

Shivan’s plans include building solutions and serving Amazon “as long as I can”.