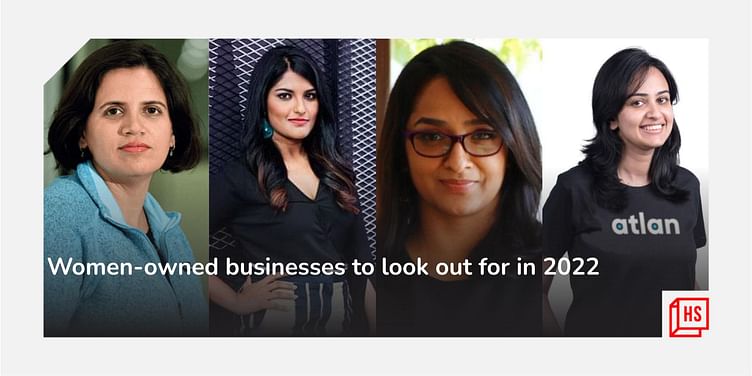 Women-owned startups have been brewing a revolution in the last few years. Here’s a quick low down of some promising female-founded businesses to watch out for in 2022.

The year 2021 saw Falguni Nayar-led ﻿Nykaa﻿ launch a stellar IPO, which was subscribed 81.7 times in October 2021, making Falguni the wealthiest self-made woman in the country.

Then, there is ﻿MobiKwik﻿ co-founded by Upasana Taku. The startup entered the coveted unicorn club in 2021 and is all set to get listed this year. One of India’s largest mobile wallets and Buy Now Pay Later (BNPL) players, Mobikwik’s revenue grew by more than 100 percent for three years between FY17 and FY20.

However, there is still a lack of women-led unicorns, and it is time women founders get their due.

With the progress women entrepreneurs have made in the last few years, 2022 is bound to be a year of wins — by taking risks, solving problems, and seizing opportunities.

Here are seven women-owned businesses to watch out for in 2022. These companies are either already champions in their sector or show great potential.

Co-founded by Ankiti Bose and Dhruv Kapoor and headquartered in Singapore, ﻿Zilingo﻿ is a B2B tech platform. The startup was started with the idea of allowing small-scale sellers of Thailand and Malaysia to sell their goods online, but over the last couple of years, it has transformed itself into a B2B platform, which resolves the various logistical issues the merchants face in their businesses and provides them with supply chain solutions.

Zilingo is edging towards the unicorn club so it’s a high possibility to see another woman-owned business among others join the league in 2022.

An Artificial Intelligence company, which powers retail, education, healthcare, media, and finance, among others, with its image-recognition platforms Vue.ai and Blox.ai, ﻿Mad Street Den﻿ was founded by Ashwini Asokan in 2016.

Today, it has raised over $35 million in funding and its investors include Exfinity Venture Partners and Sequoia Capital India. Some of its clientele include Tata Cliq, Kapiva, Mercado Libre, and Macy’s.

While Niveda worked as a UX designer at Amazon where she was one of the product owners for the Alexa-Cortana integration and designed new features for Kindle, Madhumitha finished her doctoral studies from Carnegie Mellon University in early 2021, before which she was a software engineer at Amazon Web Services.

Nume Crypto has developed a protocol to make cryptocurrency-based payment transactions easy to initiate and extremely economical to process.

A fintech startup founded by entrepreneurs Anisha Dossa and Anusha Ramakrishnan, Mumbai-based ﻿Jify﻿ operates on the B2B2C model. While it was started in July 2021, it is already catering to about 50,000 employees through 15 to 20 corporate companies in India.

With the goal to turn every borrower in the country into a saver, it will offer educational content to nudge its users into saving based on their financial capacity. Amid the information overload, choosing the source for financial advice and data can be the first time entrants into grey and white-collar workers.

[100 Emerging Women Leaders] From dealing with data points to democratising data with Atlan, the journey of Prukalpa Sankar

After delving into social intelligence with Social Cops, Prukalpa Shankar founded a data democratisation startup with ﻿Atlan﻿. The startup recently raised Series A funding of $16 million.

Since emerging from stealth, the company has grown rapidly. It reported a 16x growth within the last two quarters. It is currently used by teams at large enterprises like Unilever as well as high-growth startups such as Postman and Delhivery,.

Atlan was recently recognised as a Gartner Cool Vendor 2020.

Another fintech startup, ﻿Findeed﻿ defines itself as a holistic financial service for the working class Indian. Co-founded by Srividhya Ramaratnam and Sriram Shankar in 2019, it provides low to mid-income Indian families access to formal credit with simple and fair collateral-free loans.

With over 20 years of experience, Srividhya has worked across several sectors, including strategy and growth in ecommerce, financial services, and management consulting. She earlier led ﻿Flipkart﻿ 's fintech initiatives and was also a business leader at Intuit.

In 2021, Findeed announced raising an undisclosed seed round facilitated by Venture Highway, Anicut Angel Fund, and First Cheque to hire fresh talent across profiles to build a strong team and fuel its business growth.

The edtech startup by Tanushree Nagori and Aditya Shankar, ﻿Doubtnut﻿ is leveraging technology to help every student with instant answers and explanations to all their study questions. It was started in 2017, and today answers two million questions asked in different languages on a daily basis.

The startup is riding the COVID-19-led edtech rise, and claims that every day, three million students ask about two million questions and watch six million videos on its platform, making it one of India’s largest education apps in terms of the number of daily users.