One year of Telangana’s women commission: Here’s how it was brought back to order 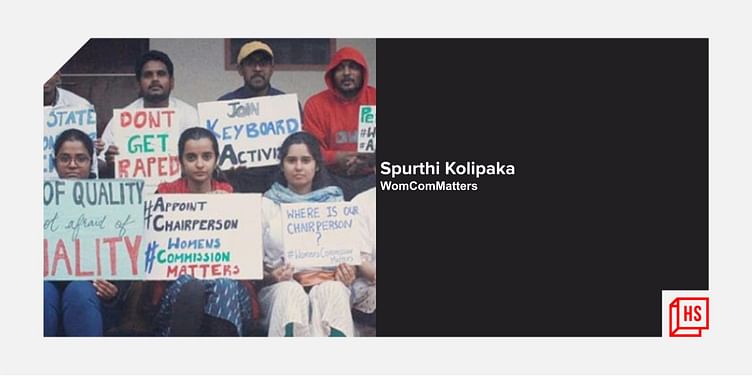 Bringing the Telangana State Commission for Women back to order was a herculean task Spurthi Kolipaka took upon herself. She fought for two years to get the state government to appoint its chairperson and members and get the commission to function properly.

In December 2021, the Telangana State Commission for Women completed one year of being brought back to order with former minister Vakiti Sunitha Laxma Reddy as its Chairperson, a position that was vacant for over two-and-a-half-years after Tripurana Venkataratnam demitted office in July 2018.

HerStory spoke to social activist Spurthi Kolipaka, Founder of ﻿WomComMatters﻿, who led the fight to get the Telangana government to bring the women’s commission back to function.

Spurthi tells HerStory, “It took us about 30 months to advocate for the commission, and it was not just about getting it back but to ensure that it is also fully functional with a website, regular information, and updates online, women having access to them through social media etc. Now, one year has passed since its constitution and even an office with a legal cell has been set up.”

The women’s commission also has an online portal through which one can file cases. The team also takes up cases flagged on social media or sent through WhatsApp. The commission is also inspecting women’s hostels, one-stop centres, and Bharosa centres – a state-level initiative for the protection of women and children with logistics help, funding, and support from the Department of Women and Child Development Telangana – to ensure that women are being treated well there. While domestic violence has been a predominant issue, the commission is also spreading awareness around POSH in rural areas.

Apart from these, the commission has also taken suo motu cognizance in several cases of crime against women that took the state by storm.

Cases with the commission

In the last one year, the commission has received around 600 cases of which it has disposed of 60 percent. Sunitha Laxma Reddy, Chairperson of TSWC states that the majority of cases were of domestic violence and dowry harassment.

“There were a few cases of dowry deaths and at least 10-20 cases of workplace harassment among other miscellaneous cases like property disputes,” she says.

Telangana has also seen a rise in the NRI marriage disputes cases with 728 cases filed in one year alone out of which 678 cases are lodged in the police stations of rural areas.

Rekha Sharma, NCW (National Commission for Women) chief while addressing a campaign, had earlier said, “There are 5,858 NRI marriage disputes registered with NCW which require coordination with different departments/agencies in different countries to solve them.”

Reddy admits that there were 15 cases of NRI marriage disputes registered with the state commission. She explains, “We call respondents’ parents and counsel them. If they come to a compromise with the man then the case is resolved. Otherwise, we forward the case to the NRI cell, which is led by the state police. In some cases, the authorities impound the passport and a lookout notice is also issued.”

While it's easier for Telangana women now to approach the state commission for grievance redressal, the grind for its revival was not easy. There were several moments of self-doubt for Spurthi.

“For a system that’s already available, asking for its functionality doesn’t garner instant support as opposed to having a fresh idea which creates a lot of buzz. With something that was set up decades ago and hasn’t been functioning to its full potential, people had lost all hope so to break the mental barrier amongst the development and social sector for them to sign the petition was a huge challenge. Somehow, in such cases, the cynicism is at its peak rather than a belief or a hope,” she shares, adding that the initial days were filled with despair.

So to counter this mindset, Spurthi and her team decided to empower themselves with knowledge by reading and understanding the National Commission for Women Act, 1990.

'To all distressed women out there, my doors are open for any help' — Lalitha Kumaramangalam, NCW Chairperson

“I have read it over 30 times. But reading a legal document isn’t the most fun activity so we started an initiative called “Act reading” where whenever we get 10 sign-ups from people who’re interested in the commission, we would have an orientation programme where we would read the act together and highlight some parts of it. Once they read it themselves, they realised its potential and the power it holds. This is how we reached out to over 300 people who we just found in different batches.”

One of her volunteers walked the streets of central Hyderabad asking people if they knew what a women’s commission is and they received a negative response in general. “That itself showed that unless citizens hold the system accountable, it isn’t going to work because the government also has its priorities set and it was time to put gender justice back on the agenda and make it a priority,” says Spurthi.

The petition she started on Change.org to campaign for a fully functional women’s commission in Telangana received about 35,000 signatures before the state government was moved to take action and appoint the Chairperson and members for the women’s commission.