From a place to find safe drinking venues to a platform for women-led businesses, how Sarah Vee built Women Of Hong Kong 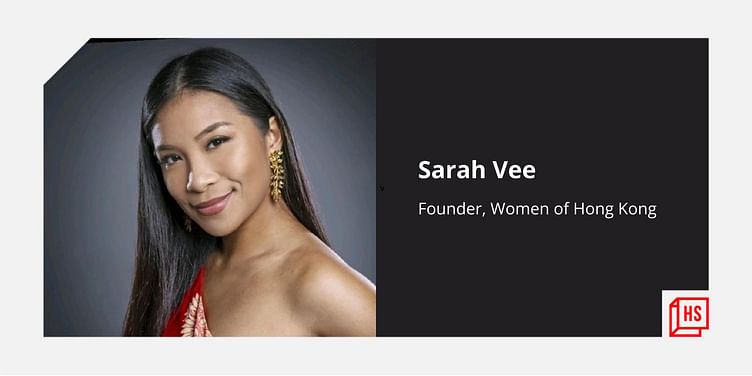 Women of Hong Kong allows women to collaborate and learn from others’ experiences. It allows members to add their events, classes and courses and gives access to women-led businesses, groups and forums, job listings, and skills.

A Filipino, Hong Kong resident, and a single mother, Sarah Vee, is known for building the online networking and community platform — ﻿Women of Hong Kong﻿. Prior to building the platform, Sarah had made her mark as one of the top entrepreneurs in digital marketing in the city.

Sarah’s journey to building a digital marketing firm and later Women in Hong Kong has been long, and one with multiple ups and downs.

“I was the girl next door until I turned 18. I discovered alcohol, meeting a lot of friends and exploring nightlife. Along the way I worked my way to becoming a club manager at one of the prestigious nightclubs in Hong Kong,” says Sarah in a conversation with HerStory.

As a club manager, Sarah noticed what every woman across the globe faces — trying to have a good time at a club or bar without attracting unwanted attention.

Starting with a safe drinking group

Sarah also observes that in Hong Kong everybody places importance on how full the venue is and if it’s empty, it isn’t worth visiting.

“I realised when women go to crowded places in the night, they face numerous – they feel unsafe, they have to go in groups, they have to protect themselves from the men, being taken home drunk, not knowing how to make a person realise  ‘no’ means ‘no’ and to shake off those feelings of guilt or shame,” says Sarah.

To address all these, at the age of 21 in 2014, Sarah built a Facebook group, Girls of LKF. LKF is a party district in Hong Kong. By the end of the year, the small group had over 200 women in Hong Kong and by 2015 they started a WhatsApp Group, that by 2019, there were 25o women on the WhatsApp Group and 2,500 women on Facebook.

“This community soon changed its name to Girls of Hong Kong, because we were young, networking and meeting each other frequently. Soon, this became less about partying and drinking and more about community. It went from happy hour drinking to brunch spots, or meeting the right people for consultation, or sharing numbers,” says Sarah.

Questions, I can’t ask anyone else

Sarah explains women started asking for other advice on the group that one cannot find on Google, ask on Facebook or even ask their parents.

It has become a supportive space for women where irrespective of age, ethnicity, location, or designation, it is about helping everyone equally.

The group found a shift in 2019 when the geopolitical scenario in Hong Kong changed with the Anti-Extradition Law Amendment Bill Movement, also known as the 2019 Hong Kong protests.

COVID-19 also changed the way group reacted to situations and as the pandemic raged on, conversations took on different hues.

“They changed from vanity questions to life-changing ones like - I have lost my job? Who can I speak to? I have these skill sets… and this heightened during COVID. Women were losing jobs or were forced to leave jobs as they were the primary caregivers. Children were at home, and women were stuck between continuing with their jobs or quitting, and women by default quit. It was one of the many problems COVID threw up,” says Sarah.

Apart from a geopolitical turmoil and a pandemic, women were also dealing with a rise in domestic violence cases. About 60 percent of women who lost their jobs also had to endure losing their relationship.

“WhatsApp became a lifeline for many women. By January 2020, I felt that there were many women that needed help in Hong Kong, but just building WhatsApp groups wasn't scalable. I decided to create a website and a community. I decided to start forums and build business directories so that women could post details of their businesses and services. I also thought of using my marketing expertise,” says Sarah.

The website was completed only in August 2021. “When people ask me why it took a year, it was because I was battling with my own mental health. I was going through the imposter syndrome. I often asked myself, ‘Who am I to build a network that other women believe will help them. For a year-and-a half, I didn’t do anything. I kept thinking someone will build it. There were communities for a business need or for charity, and I would think - you don't have to be working at a charity to connect with another women. You could simply have coffee, or just ask a question. It is about having just your space,” says Sarah.

In February 2021, Sarah happened to listen to the podcast —  The Fear of Doing Something. It said if you are fearful of starting something, ask yourself this question. “If you let your fear of starting something stopped you, how many other lives are you not impacting, simply, because you are too afraid to start?”

“I then thought let me build the community and help a few women rather than none at all,” says Sarah.

The platform allows women to collaborate and learn from others’ experiences. It allows members to add events, classes and courses, and also gives access to women-led businesses, groups and forums for job listings, and skills. Sarah believes the platform could soon go global.

Her advice to young leaders is pragmatic.

“Believe you can do it. No one else can convince you that you are powerful, you are skilled, you are smart, wise and knowledgeable unless you believe in yourself.”