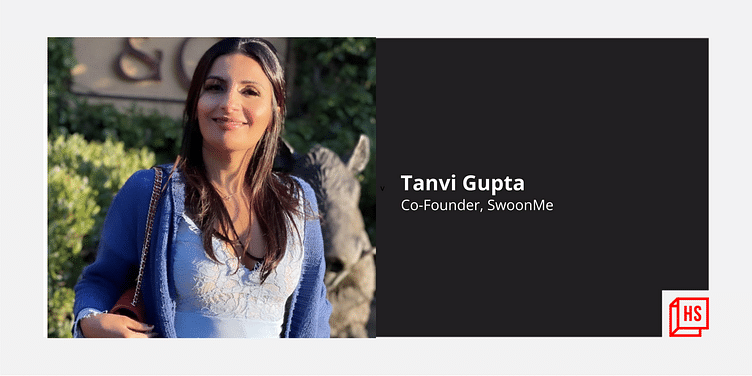 Tanvi and Rishabh Gupta launched SwoonMe in the US and India as a voice-first dating app that aims to bring intimacy and authenticity back to online dating.

Tanvi Gupta, founder of dating app ﻿SwoonME﻿, believes that true compatibility goes beyond looks, but the dating world is heavily indexed on forming connections based on physical appearances.

“I wanted to solve the problem of judging someone based on superficial factors like looks, status, money, job profile, etc. I wanted people to actually lean into emotional connections and see each other for who they really are as that is what makes/breaks a meaningful relationship. I’ve always thought voice is a strong medium of interaction when it comes to getting to know new people,” she says.

In 2021, along with her brother and co-founder Rishabh Gupta, she launched SwoonMe, a voice-first dating app that aims to bring intimacy and authenticity back to online dating.

Tanvi explains, “It is very easy to filter and completely change the way you look in profile photos but it's hard to fake your voice. A person’s voice shows emotion, personality, sociability, and so much more. We want singles to focus on voice rather than swiping through endless profile photos. It’s really like bringing new tech to old-school dating. The voice-first concept takes away the feel of dating based on looks while the avatars help you imagine what they might look like. Think of the Netflix show “Love is Blind”.”

Tanvi moved to the US at the age of 16, for higher education and has an MBA degree from Marquette University in Milwaukee. After that, she worked on Wall Street with Morgan Stanley and Citi Group. She also met her husband and moved to the Bay Area - joining Facebook to work on Messenger and Instagram for three years.

Tanvi says SwoonMe is a culmination of her personal grievances when she was dating a few years ago.

“I knew I wanted to build something different because I felt none of the existing mainstream platforms such as Match.com, ﻿Tinder﻿, ﻿Bumble﻿, and ﻿OkCupid﻿ were solving my key need for a deep/meaningful relationship. I wanted to feel seen and heard without 100 percent focus on just my full-screen photos,” she says.

When the pandemic hit, she felt it was time to move on from Facebook and put her technical and product experience into use and build something that would revamp the dating space.

Once Tanvi had built her hypothesis around the concept of Avatars + Voice-first dating, she started a website to gain newsletter subscribers and ran surveys to understand the demand for this type of product.

“I was surprised with the number of sign-ups we received and those early subscribers ended up being the Beta users that gave us a lot of valuable feedback in launching and improving our product,” she adds.

One of the key factors she understood from one of the surveys of 200 people was that 70 percent of straight women feel dating apps rely too much on looks as compared to 60 percent of straight men. Overall 40 percent said that listening to sound bites/voice clips on a profile would increase their interest in a potential match. All these data points fed into building a dating platform that focuses on bringing a dater’s personality to the forefront led to SwoonMe.

The app allows users to interact with one another through voice and customisable avatars before revealing/showing their photos to their matches after playing audio icebreaker games with each other. These icebreakers involve users sending each other cute/about you voice notes to each other. This process lends itself to getting to know each other’s personality, voice, the way they sound, their emotions, and how they might be feeling and brings that concept of matching based on personality to the forefront.

On SwoonMe, photos come later. After two ‘Swooners’ have matched and played two rounds of icebreaker games with one another, they can then choose to reveal/show their photo. The best part is that they can also hide it again later if they choose to.

“The market for an app like this is huge, but the options are limited as of now. None of the competitor apps are offering anything like this at this time. We are seeing strong retention and traction with users because of audio icebreaker games and the use of avatars and sound bites. That’s what makes us niche,” Tanvi says.

Rishabh Gupta, who is also the CTO of SwoonMe, has worked at companies like Samsung, Grofers and Expedia. He single-handedly built a performant, stable, and delightful SwoonMe app on both iOS and Android platforms.

SwoonMe is a team of eight people including engineers, designers, and a marketing team. Elizabeth leads the design team while Vaivhav Kumar is Head of Growth for India where the app launched on January 26 this year.

SwoonMe targets Gen Zs and millennials who are already familiar with audio-first products and have shown strong adoption for platforms like Clubhouse, and Twitter spaces.

Right now, the app does not charge users but the founders are actively working on finding a PMF.

“We will introduce the Freemium model towards the end of the year with a monthly subscription fee and will have premium features such as the ability to send flowers/food etc by partnering with delivery services through SwoonMe while maintaining user privacy, offering other cool features like Avatar video calls for fully immersive experiences, personalised Avatar stickers and a lot more that I‘d like to keep quiet about for now,” she says.

According to Tanvi, the biggest impact of SwoonMe is that it provides a safe, secure, private platform that doesn’t make people, especially women feel judged, insecure, or conscious.

In the two to three weeks of its launch in India, SwoonMe has crossed 10,000 users, seen over 100,000 swipes on the app, with nine minutes being the average time the user spends on the app.

Its biggest competitor in this space is Hinge in the US as they are also focused on connecting people that are looking for a meaningful relationships.

“I wouldn’t expect users that are looking for casual dates/hook-ups to come to SwoonMe as we require some upfront effort and investment of your time talking through your voice with potential partners rather than mindless swiping of photos. As far as competition in India is concerned, Happn has some voice features but again, it’s not a voice-first platform. We’re also competing with apps like Aisle and Truly Madly for our user base,” she adds.

In its seed round, the app received a lot of interest from investors and Tanvi says they raised more than its goal. It is currently in the process of raising $1M to grow its user base in the US, India, and a few other countries that they are researching.

To begin with, in 2020 , Tanvi initially invested $50K of her own to hire a small team and build the initial MVP.

In the future, Tanvi is looking at SwoonMe hosting events for users to get real-time feedback and meet them.

“A brand ambassador program in colleges is another thing we’re working on to gain popularity with Gen Zs and make SwoonMe mainstream,” she says.

India’s “Beauty Queen” who made in India to sell in Switzerland in 1992: Biotique Founder Vinita Jain’s story