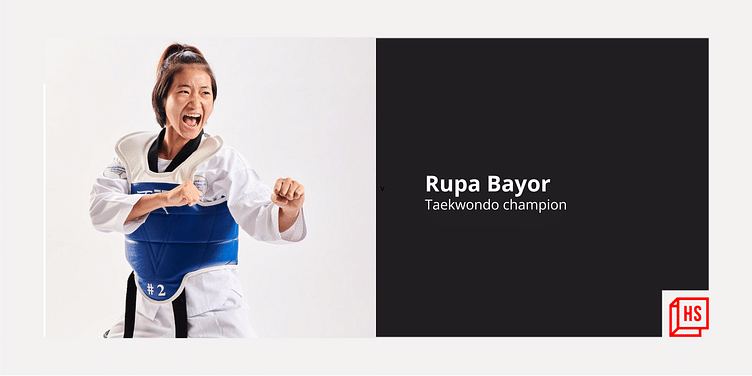 Taekwondo player Rupa Bayor has won medals in two out of the three international competitions she participated in recently. Early this year, she also became the first female Indian athlete to win any medal at a G2 event of World Taekwondo (WT).

Rupa Bayor was born in Sippi, a small village in Arunachal Pradesh, located 14 km from the district headquarter, Daporijo. Situated between Pissa Hill and Btam-Behu hill on two sides and Subansiri on the other side, it’s home to a population of just a few hundred villages.

The Taekwondo champion won the bronze in the female senior 1 Poomsae event at the 8th Croatia Open International Taekwondo Championships in Zagreb earlier this year, becoming the first female Indian athlete to win any medal at a G2 event of World Taekwondo (WT).

Hers is a journey from a small village in Arunachal Pradesh to the Taekwondo international circuit – of a fiercely independent woman living life on her own terms.

“Just like other children in my village, I spent most of my childhood farming with my mother. My father had passed away when I was a child. As a single parent, my mother worked hard to raise us. Things were hard, but I was determined to not let that affect me,” she tells HerStory.

Hailing from a community where girls are married off before the age of 18, Rupa’s story is also one of breaking the norm with determination and ambition. Her family’s unstinted support has ensured that she is living her dream of being a world-renowned Taekwondo player.

Rupa’s uncle introduced her to karate at a local martial arts club. Later, he encouraged her to switch to Taekwondo because it’s an Olympic sport with bigger potential in the country.

“I took up Taekwondo at the age of 15. My mother has been supportive towards my choice in taking up the sport. My mother hoped for a better future for me despite the hard circumstances we were in and the lack of formal schooling she had as a child. My mother urged me to leave the village to seek a better life,” she says.

Rupa then moved to the capital Itanagar for training, and since then, there has been no looking back.

Her first international tournament was the Kim Un Yong Cup in South Korea, where she lost due to the lack of experience on the international circuit.

She then competed in the South Asian Games that year, where she won a silver medal. Following the pandemic, I was unable to play for two years.

A move that brought results

In February 2021, Rupa relocated to Mumbai to improve her performance at the Indo Korean Taekwondo Academy.

“I planned to move to Mumbai for two months, but understood that it was insufficient time to practice as learning is a continuous and massive process to become a top athlete at the international level. I trained at IKTA for two months due to a shortage of funding. However, with the help of the Welspun Super Sport Women Program and my coach, I was able to extend my training period and pursue my passion. I made sure to do justice to my coach's efforts by training six days a week for approximately 12 hours a day for the last 15 months at Indo Korean Taekwondo Academy,” she shares.

This led to her medal-winning performance at the WT Croatia Open where she won her first individual bronze medal in a G2 event for India.

“My Taekwondo journey has been for three years, and I am proud of myself as I won two tournaments out of the three since my journey began to represent India as a Taekwondo player,” she adds.

Her day starts at 6 am and she trains from 7 am until 2 pm. After the morning session, she comes home to cook and rest until 5 pm. Her second training session starts at 5 pm and lasts till 8:30 pm. She takes the day off on Sunday to recuperate, spend time with family, and prepare for next week's training session.

Rupa believes she is lucky that she has never faced any discrimination when it came to Taekwondo, thanks to all the female athletes who have been an inspiration.

“I think that's a positive sign for us as a society, hoping it will allow more girls like me to pursue their dreams. Sports is empowering and I strongly believe that every young girl should take up sports to be more self-confident, healthy, and self-reliant,” she says.

Rupa is preparing for her next tournament - the Asian Poomsae Taekwondo Championships in June, followed by the Korea Open in July, the Sweden Open and the 19th Asian Games in China, in September.

On her short visits home to Sippi, she receives a lot of love and attention from the people in her village.

“They are pleased to see a woman representing their village and Arunachal Pradesh on a national and global scale. My biggest dream is to win the Asian Games this year. That apart, my personal dream is to promote and the teach Taekwondo to children in my village back in Sippi,” Rupa says.